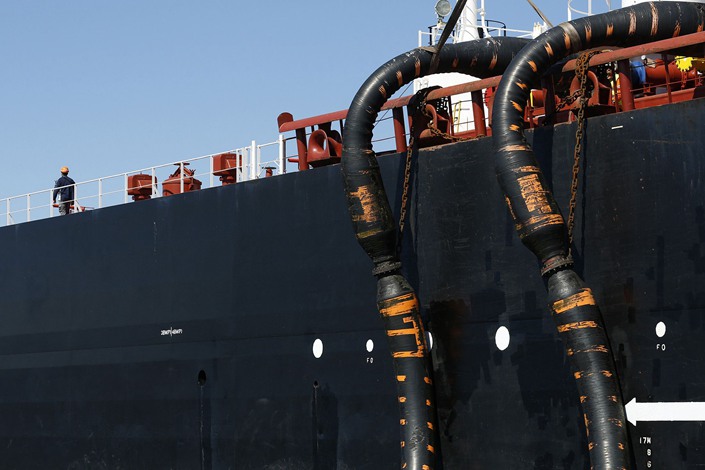 Oil pipes connect the Monte Toledo oil tanker to an offshore pumping station as it delivers a shipment of Iranian oil to the Cia. Espanola de Petroleos SA refinery near Algeciras, a few miles from Gibraltar, on March 6, 2016. Photo: Bloomberg

Unipec, the trading arm of China’s biggest oil refiner Sinopec Group, hired a newly-built very large crude carrier to load low-sulfur diesel in Asia for delivery to Europe. The vessel ordinarily would have sailed empty from its shipyard in Northeast Asia to the Middle East or West Africa, where it would pick up crude for the first time for delivery to customers across the globe.

While supertankers are built to transport dirty fuels such as crude oil, they can carry cleaner products like gasoline and diesel on their maiden voyage. Unipec intends to charter brand new vessels on a regular basis to transport more diesel to Europe, thereby clearing out bloated fuel stockpiles in Asia, according to two traders familiar with the matter, who asked not to be identified as the information is private.

Asia has traditionally been an exporter of gasoil to Europe as well as Africa, with trade flows fluctuating based on relative prices. The difference now is that the new supertankers allow traders to at least double the size of their cargoes compared to long-range vessels, usually the largest reserved for refined fuels.

“This is definitely good news for Asia refiners. Moving these barrels out of Asia will tighten supplies and support regional margins,” said Serena Huang, senior analyst at Vortexa Ltd. “That said, traders will only move the barrels if the arbitrage is positive for them.”

Unipec isn’t alone. At least two to four fresh supertankers, chartered by trading houses and oil majors, are expected to ship diesel west of the Suez Canal in November, according to a trader and two shipbrokers. That comes after about seven carried distillates on maiden voyages in the third quarter, compared with four in the second quarter, Braemar ACM Shipbroking data showed.

These maiden shipments are set to grow in the coming months with shipyards expected to deliver 20 newly-built supertankers from Oct. 1 to March 31, according to Anoop Singh, who heads East of Suez tanker research at Braemar.

Unipec is sending the fully-laden VLCC Yuan Hua Yang to Rotterdam after picking up multiple cargoes via ship-to-ship transfers throughout Asia, according to traders and shipbrokers. Earlier this year, the company hired VLCC Elandra Kilimanjaro on a time-chartered basis and sent their cargoes to Europe, West Africa and Latin America, said a trader with knowledge of the matter. In all, the company will have hired eight new supertankers since 2017 to move diesel from Asia to the west.

Apart from Yuan Hua Yang, there are at least four more VLCCs laden with middle distillate-type fuels currently on the water around West Africa and Europe. The Yuan Kun Yang is sailing to a ship-to-ship transfer site off the U.K. coast. The Babylon, now off the coast of the Bahamas, recently partially dischared its cargo.

Asia has been chock-full of distillates this year amid an uneven recovery from the pandemic that resulted in exports by countries such as China, India and South Korea.

Some of that oversupply has begun to ease as this trade flow continues. That’s contributing to the region’s refining margins for diesel, which have doubled since the end of October to $4.68 a barrel at 4:30 p.m. in Singapore on Thursday.

“We do expect the still-long Asian gasoil market to continue needing to push excess volumes into the European market,” said Eugene Lindell, senior research analyst at JBC Energy. Returning demand in India and China in the final two months may shrink the outright flows, he said.