In Depth: The Local Governments on Track to Smash Rail Monopoly 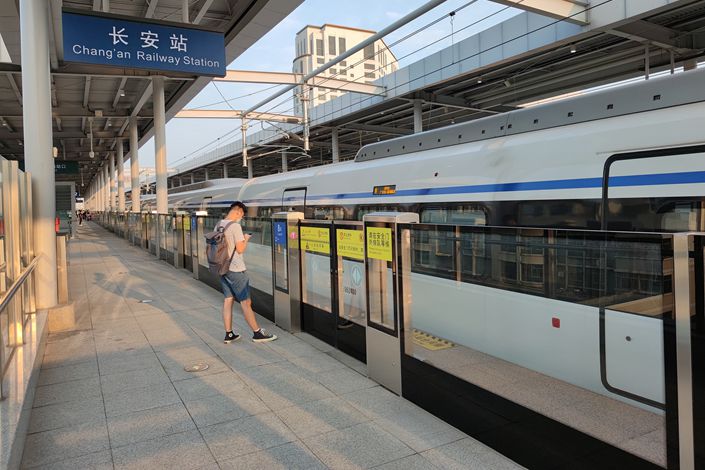 The Dongguan stop on the Guangzhou-Shenzhen Intercity Railway on Sept. 5.

A 71-year monopoly by China’s state-owned national rail operator is being cracked ajar, as local governments begin to operate their own intercity lines.

A new route between the eastern city of Hangzhou, hometown of tech giant Alibaba, and its neighboring Haining, is expected to be up and running next year. But it will be operated not by China State Railway Group Co. Ltd. (CR), but by Zhejiang Rail Transit Operation and Management Group, a company designated by the local provincial government.

That will follow a new line in the southern metropolis of Guangzhou, which is on track to be the first to break the monopoly on non-CR subsidiaries running intercity links.

While only a handful of lines in rich provinces are taking this path, they represent a new chapter in Chinese rail policy, which was altered last year to let local governments manage their own railways — and make them shoulder the profits or losses they bring. China’s central planners made the change partly because CR had racked up huge debts building the world’s largest rail network.

But while some local administrators are enthusiastic about the new-found autonomy, the plan could place the burden of operating potentially unprofitable rail lines on their shoulders, even as they are forced to compete with faster CR-operated trains on similar routes.

Expanding China’s railway network has long been a cornerstone of the country’s infrastructure sector. A 10-year construction blueprint put out in 2016 by the National Development and Reform Commission (NDRC), the country’s top economic planner, set a goal of building eight long-haul railways connecting China’s cardinal directions.

Aside from those expensive projects, it also called for construction of less expensive intercity lines in priority areas such as the Pearl River Delta and Yangtze River Delta, in a bid to better connect big cities with the less-affluent towns orbiting them.

But the NDRC didn’t nominate who would be responsible for delivering the projects. In a briefing on the plan, one government official said the majority of financing would come from the national budget and an industry fund backed by the central government. Bonds issued by China Railway were also a source.

That helped maintain China Railway’s stranglehold on network operation until 2019, when the central government released a reform scheme which signaled a switch in funding sources. Local governments, which previously only operated metros, could now fund intercity rail lines. And that would give them the power to operate them.

The affluent provinces of Guangdong and Zhejiang — which ranked No. 1 and No. 4 in China for GDP last year — began pouring money into intercity rail construction.

The Guangdong government now has 11 intercity lines under construction. One, connecting the provincial capital of Guangzhou with nearby Qingyuan, will soon be up and running, after it began late-stage testing in July.

That seems to be good news for the state conglomerate. A Zhejiang government source, who spoke on condition of anonymity, said China Railway had indicated it was looking to focus on the eight long-haul interprovincial lines, which are harder to build and require drastically more resources.

As is the global experience, China’s tourism sector has been hit by the coronavirus pandemic particularly hard, as city lockdowns and disease control measures kept people indoors and shuttered tourist sites.

In the long term, giant debts have got in the way of the state conglomerate building intercity lines, especially given the new priority long-haul routes, a Zhejiang government source told Caixin. CR’s debt-to-asset ratio has hovered around 65% in recent years, a figure twice that of the Shanghai-listed Beijing-Shanghai High Speed Railway Co. Ltd., which operates the most profitable and busiest rail line in China.

Intercity lines often cater for people who travel between cities for business, said the Zhejiang government source, and if they are managed locally by cities they can be better synchronized with locally administered transport options like metros.

And it makes sense for those who stump up the cash to build the lines to try to make some of that cash back by running them, the person said.

But whether the local governments can actually make a profit from operating the lines remains in doubt.

New lines typically suffer from a lack of passenger traffic in their early stages which can bleed revenue. One line connecting Guangzhou and two other cities in the region saw its occupancy rate reach just 33% in 2019, after three years of operation.

Then there’s the issue of competition. Intercity trains travel slower than those on national high-speed routes, which often stop at the same stations. In a recent research paper, Jing Guosheng, head of Guangzhou Transport Planning Research Institute, singled out a local intercity line that took 20 minutes longer than the national railway to reach the same destination.

Nevertheless, local governments are still keen to build them, pledging subsidies to keep the projects afloat. The infrastructure is about serving citizens in the region, not making money, the Zhejiang government source said. “We can decide how many trips a train makes each day, and that’s helpful for operator to make some profit.”