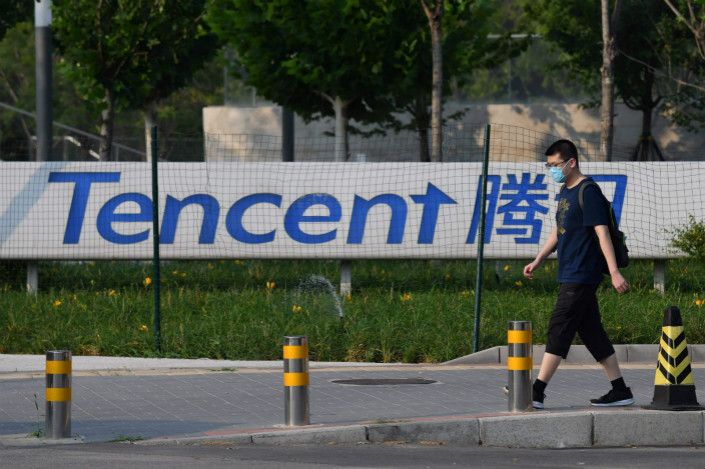 Tencent pledged to work with Beijing and control an expansion into the fintech arena to ensure it remains compliant. Company President Martin Lau told analysts on an earnings conference call Thursday that the company will continue to maintain a prudent strategy and that the envisioned antitrust rules tend to focus more on transaction-based platforms than on Tencent’s core business of social media and gaming.

“Games were way ahead of expectations,” said Daiwa Capital Markets analyst John Choi. “This is important as it is the most profitable part of the business within Tencent.”

Tencent shares climbed 4.7% Thursday, recovering partially from a $290 billion selloff among Chinese tech titans led by Alibaba Group Holding Ltd. The WeChat operator’s main business of video games is perceived as less vulnerable in any potential crackdown than the operations of its e-commerce and fintech peers.

Tencent’s fintech business — valued at $200 billion to $300 billion before Ant’s IPO derailment — has become one of its fastest-growing divisions. Together with cloud computing, the fintech and business services segment generated almost $15 billion, or a quarter of total revenue in 2019. The bulk of that was from commercial payments facilitated by the WeChat super-app, where a billion Chinese schmooze, shop and share cabs.

“In the face of public health, macroeconomic and geopolitical challenges, we will seek to sharpen our focus, innovate, and collaborate with our partners,” the company said in its filling.

That’s despite signs of peaking in-game spending globally. Tencent is also fending off stiffening competition from the likes of TikTok-owner ByteDance Ltd. and grappling with global macroeconomic uncertainty that continues to depress advertising. Ad sales grew faster during the September quarter, thanks to big web-series releases and WeChat’s new ad slots.

Excluding the one-time gain, net income would have fallen in line with or below estimates. Tencent was a major beneficiary of the tech rally during the September quarter, given its ownership of some of the world’s largest tech players from JD.com Inc. and Meituan to electric vehicle maker Nio Inc. and online real estate platform KE Holdings Inc.

Tencent has charted a lineup of new titles for the next year to shore up a slate that now revolves around aging franchises Peacekeeper Elite and Honor of Kings. In October, its Riot Games unit started testing League of Legends’ highly anticipated mobile version in Asia. Yet another potential hit, Mobile Dungeon&Fighter, has been delayed since August while developers implement an anti-addiction system required under Chinese law.

“The launch time of the flagship game ‘DnF’ has yet to be determined, but we believe the new games in 4Q20 should boost revenue,” Bocom analysts led by Connie Gu wrote before the earnings report. “Offline payment and cloud are gradually recovering to normal, while Fintech product expansion is set to drive segment valuation growth in the long term.”