Editorial: Now Is the Time to Repair Global Trust 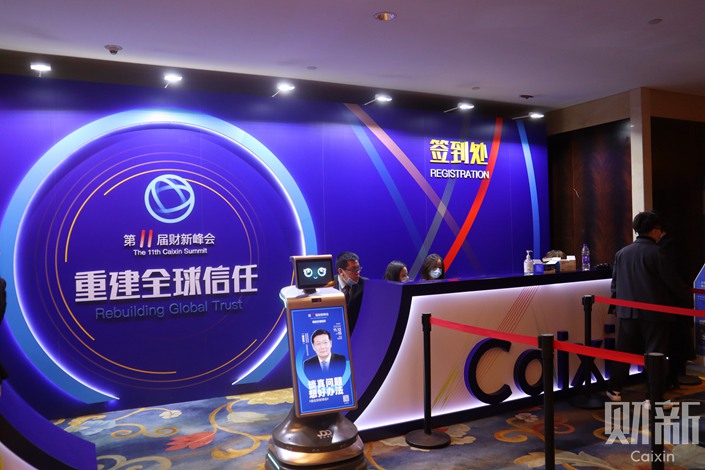 The 11th Caixin Summit, which concluded this weekend, was organized around the theme of “Rebuilding Global Trust.” Photo: Caixin

Global trust, which has suffered severe damage, now has an opportunity to recover. Recently, China’s economy has been gradually recovering from the Covid-19 pandemic, breakthroughs have been made in the research and development of coronavirus vaccines, and the United States has held a general election.

At the same time, the global economy is still in recession, and humankind continues to face challenges like the climate crisis and terrorism. In recent years, the world has experienced the costs and pain of losing trust, and has come to understand the importance of rebuilding it. Seizing this rare opportunity lay at the heart of the 11th Caixin Summit, organized around the theme of “Rebuilding Global Trust.”

Global trust has been the victim of recent trade conflicts, geopolitical tensions and public health emergencies. Since the financial crisis, globalization has receded, while unilateralism, protectionism and populism have prevailed.

In the past few years, China-U.S. relations, the most important bilateral relationship in the world, have fallen to the lowest level since the establishment of diplomatic ties. A trade war, the “new Cold War” and “technological decoupling” have caused deep concern. The global economy has not yet completely emerged from the shadow of the financial crisis, and the coronavirus pandemic has worsened. The dual economic and health crisis is a bitter result of a loss of trust and calls on us to rebuild it.

Countries are not lacking in economic stimulus policies and also have certain capacities for health research. However, the key to completely overcoming this dual crisis lies in proper international policy coordination. Reducing the trust deficit in international cooperation is the prerequisite for that coordination, and so we must say and do more to push the world in this direction.

The foundations of trust are stable expectations, mutual knowledge of interests and recognition of the boundaries of each side’s behavior. This requires clear and generally accepted rules as a common code of conduct. The current international governance system has exposed areas of dissatisfaction, but it is, after all, the result of the long-term evolution of international relations, a platform for cooperation between countries and a set of codes of conduct for all nations, and therefore the foundation of global trust. The way forward is to improve this system, not to demolish it and start anew.

The relative power of many countries in the world is changing, inevitably causing competition among major powers. However, competition neither excludes cooperation nor necessitates confrontation. It has been proved that in the global village of closely interlinked countries, confrontation is simply not feasible.

Since the China-U.S. trade war, the American electronics industry has suffered huge losses, causing a sense of cutting off your nose to spite your face. It is estimated that if China is forced to decouple from the rest of the world, more than $1 trillion may be lost globally over five years, an unnecessary loss to the welfare of all humankind.

As the two largest economies in the world, China and the United States have a special mission to rebuild international trust. Although the current geopolitical calculus of both competition and collaboration will not fundamentally change, we should — as mentioned by the Chinese Ministry of Foreign Affairs after the American election — strengthen communication and dialogue, manage differences on the basis of mutual respect and mutual benefit, and should expand cooperation and promote the healthy and stable development of China-U.S. relations.

The incoming Biden administration’s policy measures remain to be seen. During his campaign, he called for domestic unity in an effort to bridge the racial and class-based divisions in the United States. This, too, is a matter of trust. Without international trust, domestic trust cannot be achieved.

Compared with the incumbent president, Donald Trump, Biden is more willing to deal with other countries within the framework of rules-based international governance. This will be better than Trump’s unpredictable, capricious behavior. China and the United States should listen to each other more, and though we may not change each other’s minds, stable communication will make it easier to rebuild trust.

China can contribute to rebuilding global trust. The government recently stated that we must “hold high the banner of peace, development, cooperation, and mutual benefit, actively create a good external environment, and promote the construction of a new type of international relations and a community with a shared future for humankind.” Rebuilding trust is not about succumbing to others, but about meeting the needs of national development, people’s wellbeing and international peace.

This requires us to think clearly about what China’s national interests are and to show goodwill through national strategies and policies, especially the words and deeds of officials and opinion leaders, to convince the outside world that China’s goodwill is sincere, not expedient.

Admittedly, as China’s power has grown, some officials and scholars have indeed become hotheaded. They exaggerate our national strength or use it as a pretext to instigate disputes with foreign countries. This can easily cause resentment and is not conducive to enhancing international trust. The long-term efforts of government departments on the international stage may be ruined by a frivolous gimmick.

For China, the most effective way to increase global trust is to do our own business well. This means unswervingly deepening reforms, expanding opening up, and making development more transparent and predictable.

In recent years, China has implemented a series of reforms to better protect property rights and competition, and open up its financial sector. It has also made major breakthroughs in areas like the negative list for foreign investment. These measures are major steps to further embrace globalization.

In the future, we must strengthen bilateral or regional cooperation on investment and trade. On Sunday, after seven years of negotiations, China and 14 other nations signed the Regional Comprehensive Economic Partnership Agreement, which touches on trade barriers, free investment, intellectual property protection, and competition policy.

Others have suggested that China join the Comprehensive and Progressive Trans-Pacific Partnership Agreement as soon as possible. Joining a high-level free trade agreement and actively participating with global friends will not only help China promote reform and opening up, but also build solid trust among members.

As a Chinese idiom goes, “it takes more than one cold day to freeze the ground three feet deep.” Making up the global trust deficit will not happen just because of a change in a country’s government. However, rebuilding trust during a crisis is as important as finding light in a dark tunnel.

The world now finally sees a glimmer of light ahead. Because the challenges we face are global, the solutions should naturally be global. Only when governments, companies, media, and the people work together can they deal with the challenges we face, like economic recovery, climate change and terrorism.