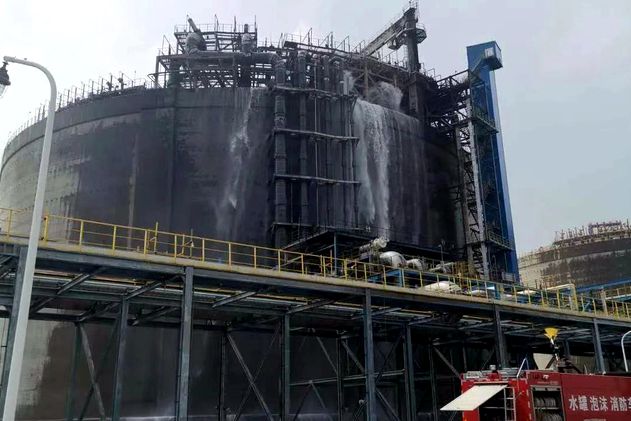 A fire broke out in a storage tank in the Tieshan port area of Beihai on Nov. 3. Photo: Beihai Tieshan Port District Publicity Department

Provincial government authorities say a “lack of management in identifying safety risks” at a division of energy heavyweight PipeChina contributed to a terminal blaze in the South China port city of Beihai that killed seven people.

The Guangxi Zhuang autonomous region’s emergency management authorities have summoned and warned representatives of Beihai Liquefied Natural Gas Co. Ltd., according to a statement posted on the government website Wednesday. The company’s ownership was transferred last month to PipeChina.

The statement highlighted issues at the terminal including operators’ violation of rules, failure to report incidents in a timely manner, and lax management of contractors.

A fire broke out in a storage tank in the Tieshan port area of Beihai on Nov. 3. Six of the nine people at the site were initially reported to have died in the fire, and the death toll later rose to seven, with the other two injured, according to the Wednesday post.

Authorities have launched a three-month safety blitz at the Beihai terminal, which is expected to be out of commission until at least December, commodities information provider JLC said.

The terminal was previously operated by leading oil refiner Sinopec, and was handed over on Oct. 1 to be operated by PipeChina, a newly formed entity that operates many of the pipeline assets previously owned by China’s major energy companies. It supplies natural gas to 14 cities in Guangxi and neighboring Guangdong province, and received 2.86 million tons of LNG in 2019.

It can accommodate up to 6 million tons of LNG per year, a capacity planned to be increased to 10 million tons over the long term. China is placing a growing emphasis on LNG and other cleaner burning and renewable energy sources in its longer term plans to wean the country off a heavy reliance on coal.

LNG prices in places around Beihai spiked shortly after the explosion due to dwindling supply. The commodity was sold at round 4,700 yuan ($713) per ton in the downstream sector in Guangdong province one day after the incident, up by 17.5% compared with prices before explosion, data from JCL indicates. Prices had returned to a range of 3,500 yuan to 4,000 yuan per ton on Wednesday.