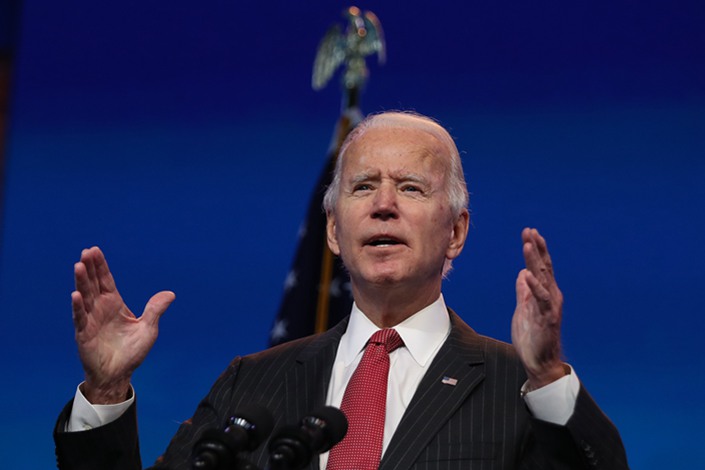 Joe Biden speaks during an online press conference in the U.S. on Thursday.

American companies in China broadly favor the prospects of a Joe Biden administration and expect more stable U.S.-China relations in the coming years, according to a new survey conducted to measure business sentiment following the U.S. election.

The survey, released Friday by the American Chamber of Commerce in Shanghai, also found that a large majority of executives from 124 companies believed the Biden administration would exert multilateral pressure on China and demand reciprocity in bilateral trade and investment relations.

Ker Gibbs, president of the American Chamber of Commerce in Shanghai, said that the results showed “businesses are signaling that a Biden administration will bring more stability to the US-China relationship. This will be welcome after several years in which American companies have had to deal with uncertainty and sometimes erratic policies.”

Compared with respondents’ sentiment in a similar July survey, companies were more optimistic about their expected 2020 revenues, with 47.6% of respondents expecting year-on-year revenue growth.

“The good news is that China’s economic recovery means American businesses are doing better than they imagined just four months ago, thanks to China’s strong economic recovery,” Gibbs said.

The results came after the Chinese foreign ministry on Nov. 13 congratulated former U.S. Vice President Joe Biden for being favored by American voters in the U.S. president election. Defeated incumbent President Donald Trump has not yet conceded, filing lawsuits in some battleground states to challenge the results.