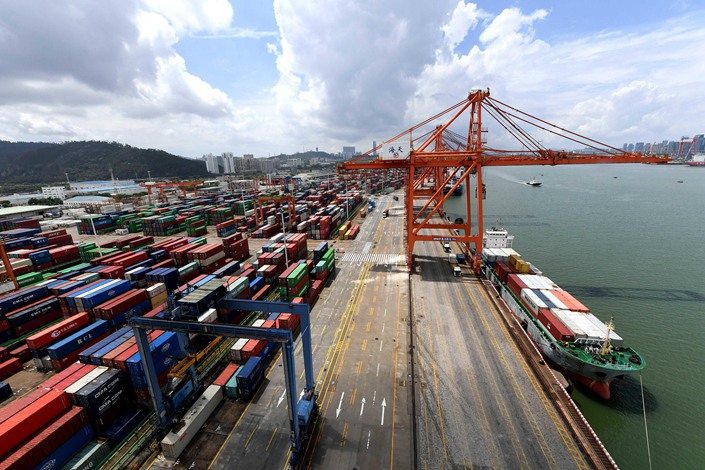 A few days ago, 15 countries, including China, signed the RCEP, marking the start of a free trade zone with the largest population, the widest economic and trade scope.

The construction of Asia-Pacific economic integration has borne fruit. A few days ago, 15 countries, including China, signed the Regional Comprehensive Economic Partnership Agreement (RCEP), marking the start of a free trade zone with the largest population, the widest economic and trade scope, and the most development potential in the world.

China’s accession to RCEP shows its determination to implement high-level opening up. It is an important measure to accelerate the construction of the new dual circulation development pattern and a powerful riposte to the tide of anti-globalization.

RCEP was initiated by the 10 ASEAN countries in 2012 and has been gradually refined over the subsequent eight years. This was not an easy process, but the results are very valuable. Since the global financial crisis, economic globalization has rebounded but trade protectionism has become rampant. The sudden Covid-19 pandemic has severely impacted global industrial and supply chains, shrunk the world economy, and reduced international trade and investment.

As Chinese leaders have said, the signing of RCEP in the current context therefore allows people to see light and hope amid the doom and gloom, showing that multilateralism and free trade are the right way forward for the world economy and humanity.

Joining RCEP is an important manifestation of China’s high-level opening up. The proposals for the country’s 14th Five-Year Plan, which will shape government policy through 2025, call on China to implement high-level opening up to the outside world and open up new prospects for win-win cooperation. The proposals are interpreted as opening to the outside world “at a larger scope, on a wider field and at a deeper level.”

We think high-level opening up can be observed from three perspectives. First, can we realize “opening up to promote reform” and use external force to solve the so-called “deep-water” problems that China’s economic reforms have long been unable to overcome? Second, can we promote the high-quality development of China’s economy? And third, can we help curb the tide of anti-globalization and lay the foundation for the next phase of globalization? Joining RCEP can undoubtedly play a significant role in these three areas.

Focusing only on RCEP’s tariff cuts is too one-sided. Judging from the text, the agreement covers market access commitments for goods, services, investment and movement of people, among other things.

The agreement also incorporates a quite substantial amount of content on trade facilitation, intellectual property rights, e-commerce, competition policy and government procurement. In some key areas, China’s commitments exceed WTO levels. Although RCEP’s significance cannot be compared with that of our WTO accession, it is still an important breakthrough in China’s high-level opening up.

China’s future opening to the outside world will not be a combination of agreements and policies, but a complete set of institutional mechanisms, like the task set forth in the proposals to “build a new system for a higher-level open economy.” Seriously implementing RCEP can help China gnaw at some of the so-called “hard bones” of its institutional reforms.

RCEP does not include subsidies to state-owned enterprises, the environment or labor, and some of its standards are not as high as other important regional economic and trade agreements like the Comprehensive and Progressive Trans-Pacific Partnership Agreement (CPTPP).

However, as some experts have said, RCEP contains everything that can be achieved for now. It has adapted to the reality of obvious differences between member states, and approaches them pragmatically. It not only follows the general laws of economic and trade development, but also conforms to China’s current development level. We can achieve its provisions through hard work, although it won’t be easy.

A few days ago, the State Council, China’s cabinet, demanded that the implementation of RCEP be carried out on schedule. This necessitates the formulation and modification of many domestic laws, regulations and policies. Most importantly, it requires a series of institutional reforms including economic and trade management and financial oversight. At the same time, we must strengthen awareness of these rules among both officials and the general public, and make our national governance system more open, inclusive and transparent.

Some people worry that, after RCEP takes effect, it will cause China’s trade surplus to shrink and impact domestic agriculture, manufacturing and other industries. In particular, they fret that its regional-content rules will accelerate the transfer of domestic industries to Southeast Asia.

These concerns are not unfounded, but the outcome depends on China’s response. If we respond well, China can take a big step on the road to high-quality development. Like other member states, China must pursue advantages and avoid disadvantages under the premise of strictly implementing the agreement.

On the positive side, the Japanese and South Korean markets will be more open to China, and the level of ASEAN liberalization will be further improved. East Asian industrial and supply chains will open up, and businesses will invest more flexibly, which will be conducive to outflows of Chinese capital and products.

At the same time, international industrial transfer is a general trend that countries cannot — and, in a certain sense, need not — stop. What China needs to do is speed up industrial upgrades and rapidly replace the old development pattern with the new. The faster we move internally, the more we can seize the initiative internationally.

High-level openness is endless. Just like sailing against the current, if you do not forge ahead you will float backward. China’s openness to the outside world will continue to improve as our economic development level rises. Joining RCEP is neither the first step, nor the last. In the future, China will continue to hold high the banner of free trade and multilateralism, participate more actively in the formulation of global economic and trade rules — especially WTO reform — and maintain an open attitude toward joining CPTPP.

China’s economic growth curve clearly shows that our entry into the WTO 20 years ago played a key role in our development. This is not only because it greatly expanded China’s access to international markets, but also because it forced China to implement drastic institutional changes, led by market reforms, in accordance with WTO negotiations. We hope that China will use RCEP as an opportunity to create similar “reform dividends” that will benefit later generations in the process of higher-level opening.