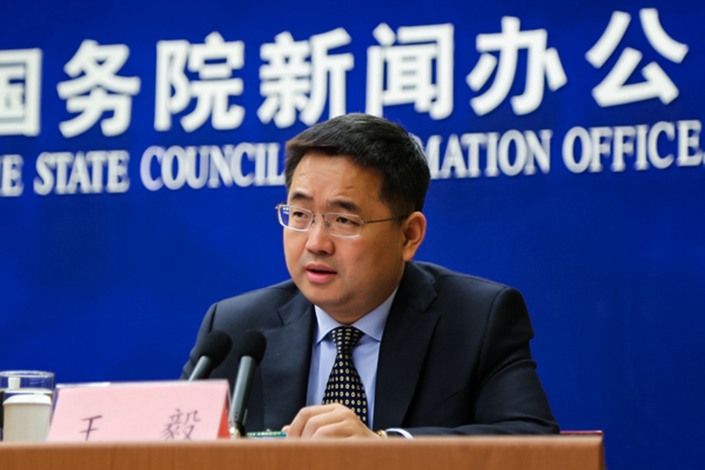 The head of the Ministry of Finance’s (MOF) finance department has taken over as a deputy general manager of state-owned financial conglomerate China Everbright Group Ltd., filling a post that has been vacant for two months, sources with knowledge of the matter told Caixin.

Wang Yi, 50, has filled a vacancy left by Cai Yunge, who in September took a job as supervisory board chairman of Bank of Communications Co. Ltd., one of China’s six largest state-owned commercial lenders.

Wang previously worked at the statistics department of the People’s Bank of China (PBOC) for more than a decade and as a deputy mayor of the eastern city of Wenzhou for two years, before he stepped into the MOF’s finance department in 2017.

The new appointment comes as authorities are tightening supervision over financial holding companies amid concerns about the potential risks they could pose to the financial system, with the new rules (link in Chinese) taking effect on Nov. 1.

Although the new regulatory regime is aimed at preventing mounting risks caused by rapidly expanding firms outside the finance industry, including internet giant Ant Group Co. Ltd., authorities are about to set rules targeting traditional financial groups that make both financial and industrial investments, according to a PBOC statement (link in Chinese).

Over the years, a number of large companies have taken control of financial companies, creating a group of corporations that have the characteristics of financial holding companies, PBOC Deputy Governor Pan Gongsheng said at a briefing (link in Chinese) in September about the rules, adding that the list includes older firms such as Everbright Group, which was approved as a pilot financial holding group in 2002 by the State Council.

Some of the stronger companies had optimized the allocation of financial resources, reduced service costs and enhanced financial services, but a few of the others had “expanded blindly into the financial sector,” adding to the risks to the financial system, the central bank said in the statement.