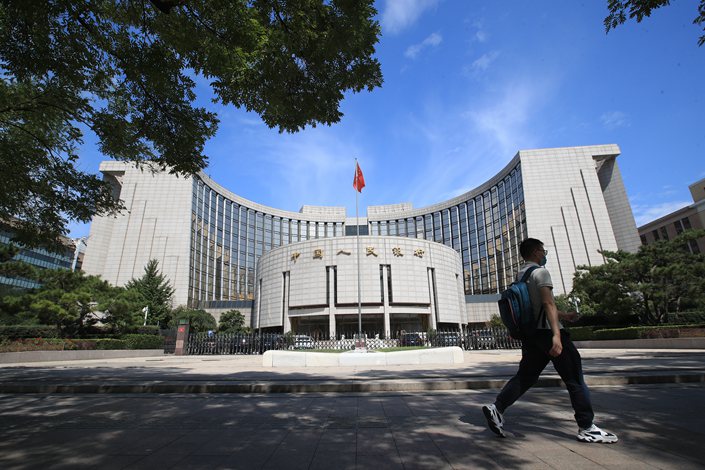 The People’s Bank of China and other financial regulators have issued draft rules that will subject Chinese companies that operate financial institutions to tighter requirements in an effort to curb financial risks.

China is rolling out a new regulatory regime for companies with significant operations in the financial sector, almost two years after the central bank flagged plans to tighten oversight amid concerns over the potential risks that such groups could pose to the financial system.

Anbang Insurance Co. Ltd., HNA Group Co. Ltd. and Tomorrow Holding Co. Ltd. were among the most high-profile companies to move aggressively into the banking, insurance and trust businesses only to get into financial trouble that required the government to step in and restructure them and defuse the risks they had built up. The new regulations, which were first flagged in a draft released by the People’s Bank of China (PBOC) in July 2019, are aimed at preventing these disasters from happening again and ensuring that other rapidly expanding firms, such as Ant Group Co. Ltd., which operates the Alipay payments platform, don’t engage in the same risky conduct.

The State Council, China’s cabinet, on Sunday released a document (国务院关于实施金融控股公司准入管理的决定) setting out requirements for nonfinancial firms to obtain licenses to operate as financial holding companies, after approving the rules on Sept. 2. On the same day, the PBOC released new measures (金融控股公司监督管理试行办法) on the regulation of financial holding firms.

Here are four things to know about the new rules, which are set to take effect on Nov 1.

Why have the rules been introduced?

The PBOC said as far back as November 2018 that it would step up oversight of nonfinancial companies that had expanded into the financial sector, including setting market en­try requirements, clearing up obscure shareholdings, regulating connected party transactions, and improving cor­po­rate gov­er­nance in the wake of scandals that had engulfed Anbang and Tomorrow Holding, which had hidden their vast exposure to the financial sector through a complex web of corporate structures and used their control of financial institutions to interfere in their operations and raise funds for their own expansion.

At a briefing on Monday, PBOC Deputy Governor Pan Gongsheng reiterated the authorities’ position that the rules were being introduced to prevent a recurrence of “blind expansion” by some nonfinancial companies that had led to a buildup of risks in the financial system.

Over the years, a number of companies have taken control of financial companies, creating a group of corporations that have the characteristics of financial holding companies, Pan said, citing the examples of state-owned Citic Group Corp., China Everbright Group Ltd. and privately owned Ant Group, which is controlled by billionaire Jack Ma, the founder of e-commerce giant Alibaba Group Holding Ltd.

However, companies that are in reality financial holding companies, even if not in name, weren’t covered by existing rules, creating a regulatory gray area that allowed companies like Tomorrow Holding and Anbang Insurance to flourish, Pan said.

Read more
Anbang to Disband and Liquidate as Restructuring Ends

Having a financial holding company with a clear shareholding structure and proper risk segregation as the controlling shareholder of financial institutions will help the integration of financial resources, and enhance operational stability and competitiveness, the PBOC said in a Sunday statement (link in Chinese).

“In the long run, the promulgation of the ‘Financial Holding Measures’ is conducive to promoting orderly competition and healthy development of various institutions and preventing systemic financial risks,” the central bank said.

David Yin, a vice president and senior analyst at Moody’s Investors Service, said that the new regulations are credit positive for China’s financial system because they will improve governance around the ownership of financial institutions and strengthen system-level capitalization. “This in turn will lower contagion risk,” he said.

Who is covered by the new regulations?

Any company outside the finance industry that owns financial institutions in at least two different sectors is required to register as a financial holding company and comply with the new regulations.

In order to qualify, it must have at least 5 billion yuan ($731 million) in registered capital. A nonfinancial company that operates a commercial bank that has total assets in excess of 500 billion yuan, or a nonfinancial company that does not control a bank but operates other types of financial institution that have assets exceeding 100 billion yuan, are subject to the new rules. The company must then apply to the PBOC for approval and once approved will be able to register with market regulators to gain an operating license. It must also add “financial holding” or “financial group” to its name.

A company that is denied approval must transfer its stakes or control in the financial companies it owns. It will also be barred from using the terms “financial holding” or “financial group” in its name.

Fintech giants such as Ant Group, which is set to list in Hong Kong and Shanghai, and Tencent Holdings Ltd. will be covered by the new rules, industry insiders said. Ant Group holds a wide variety of financial licenses, covering areas such as banking, fund management, insurance, third-party payments and securities.

HNA Group, a former high-flyer struggling under a mountain of debt incurred during a global spending spree, is also expected to fall under the new regulations. The company, based in the southern island province of Hainan, is now undergoing a restructuring led by the local government.

What restrictions do the rules impose?

Compared with individual financial institutions, financial holding companies, because of their complexity, have the potential to cause systemic financial risk. They may also build up high leverage ratios and risks resulting from connected transactions.

As such, the rules ban shareholders from certain types of conduct. Shareholders of financial holding firms are not allowed to circumvent regulatory supervision by asking other people to hold shares, abuse their positions or conduct connected transactions under an opaque shareholding structure. They must not manipulate the market or leverage their monopoly positions to engage in inappropriate competition.

Yin from Moody’s said that the regulations will force companies to operate under transparent and simplified organizational structures, and that financial institutions will no longer be permitted to hold shares in group affiliates or in their parent entities. The new rules also strengthen risk control, capital management and disclosure practices of financial holding companies, he said.

The new regulations also set out how information can be shared between companies under the same financial holding company. Companies must not infringe on the rights of clients, must obtain their clients’ consent and clarify risk-bearing entities when they share client information and technology systems.

Companies subject to the new regulatory regime will be allowed a grace period to comply and have been given one year from Nov. 1, the date the rules take effect, to submit their application for PBOC approval.

Pan said that the new rules are just the starting point for tightening oversight of financial holding companies and that there is still a lot more work to be done. The State Council’s decision and the PBOC’s measures have created a basic policy framework for regulation, but more detailed and specific rules will be needed to oversee matters such as consolidated financial statements, asset management and connected transactions, he said.