In Depth: How China’s Regulators Dismantled a Financial Empire 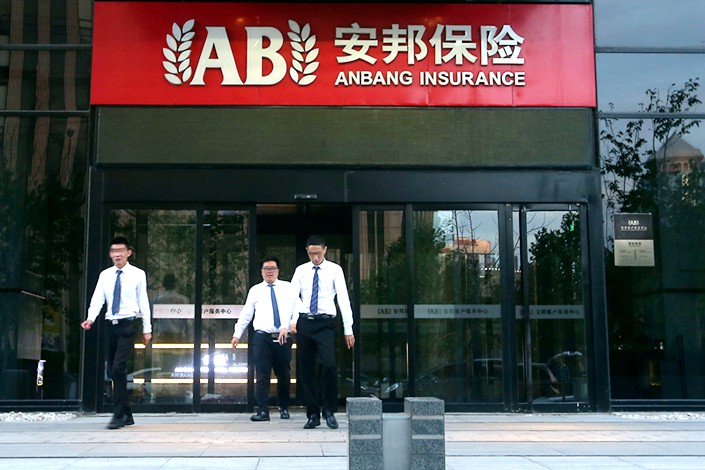 By the time the government stepped in to run Anbang, the Beijing-based company was technically insolvent.

Back in February, while most of China was consumed by the spreading coronavirus outbreak and millions were forced to work from home, a group of financial experts was beavering away in a large black office building that towers over Beijing’s central thoroughfare, Chang’an Jie, on the east side of town.

The team were rushing to tie up loose ends so they could meet a deadline to end the state’s two-year state takeover of Anbang Insurance Group Co. Ltd., a financial conglomerate led by its now-imprisoned founder Wu Xiaohui and whose reckless debt-fueled expansion posed intolerable risks to the country’s financial system.

The high-profile restructuring of the company, which has re-emerged from the ashes as Dajia Insurance Group, officially ended on Feb. 22, marking the state’s first big corporate turnaround under a campaign that began in December 2017 to prevent and defuse major financial risks — one of President Xi Jinping’s three “critical battles.”

“After two years, Dajia Insurance is like a patient that’s come out of the intensive care unit after an organ transplant,” a source close to the company told Caixin. “Now it needs to undergo rehabilitation and recovery so it will still take some time before it can be discharged from hospital.”

Anbang’s overhaul is being seen by many as a template for how the government and regulators will deal with other debt-ridden big spenders that are viewed as too big to fail, such as HNA Group Co. Ltd., which was taken over by the Hainan provincial government last week. But the complexity and opacity of its operations and the painstaking work of unwinding of some 1.5 trillion yuan ($216 billion) of risky high-yield insurance products may make Anbang something of a one-off.

The story of Anbang’s rise and spectacular fall is by now familiar. Founded in 2004 by businessman Wu Xiaohui, the company started out selling car insurance, Anbang’s expansion took off in 2014 when it started selling unconventional and risky high-yield investment products masquerading as life insurance, known as universal life insurance products. The proceeds were pledged as collateral for massive loans that were used to buy assets, people with knowledge of the matter told Caixin. Anbang’s overseas spending spree of some 130 billion yuan was all financed through such loans, regulators close to the matter said.

Anbang’s overseas shopping trolley included New York’s iconic Waldorf Astoria Hotel, purchased for $1.95 billion in 2014, a chain of hotels including the Four Seasons resorts, and European and Asian insurance companies. At home, it took stakes in several companies including real-estate developers and banks such as a 17.8% share of China Minsheng Bank that cost 90 billion yuan. It also bought shareholdings in several small regional banks and used them as ATMs to fund further acquisitions. But its activities caught the eye of regulators during a sweeping campaign to rein in “irrational” outbound investment amid fears that soaring corporate debt could pose a systemic risk to the economy.

By the time the government stepped in to run Anbang, the Beijing-based company was technically insolvent. As of end-June 2018, its liabilities were 82.8 billion yuan greater than its assets, which at the time were valued at 3.2 trillion yuan, people with knowledge of the matter told Caixin.

The firm’s insurance arm had also racked up 1.5 trillion yuan worth of insurance policies, mostly short- and medium-term insurance policies that it had no funds to repay, threatening to trigger a cash crunch that could reverberate through the banking and insurance sectors.

The task of dismantling Wu’s financial empire and unwinding a complex web of corporate entities and cross holdings fell to a team of 28 people drawn from the regulator. It took them almost a year to peel away the layers of complexity that Wu had built into Anbang to conceal the true ownership of assets, hide debts, cook the books and hide the misappropriation of funds. As they combed through the company’s records, they found more than 300 affiliated companies, loans or credit lines from 20 banks, and 8,000 separate bank accounts that enabled them to track down fictional transactions, fake book-keeping and embezzlement of funds.

In one of the most egregious examples of fraud, the investigators found that through a string of connected transactions Wu managed to turn a 400 million yuan asset into a 40 billion yuan colossus that generated a “profit” of 39.6 billion yuan. They also found that Anbang had deceived regulators. Since 2014, Anbang had quintupled its registered capital — the amount of cash set aside by a company in China to qualify for a business license — and added dozens of shareholders to what had been a group of only eight when the company was founded. As part of their investigations into the business operations of the new shareholders, regulators visited their offices and saw a large numbers of staff in high-end office buildings. But when the restructuring team took over Anbang they discovered the activity was all phony –– Wu had used 40 million yuan of the company’s money to rent venues and hire people to hoodwink the regulators.

It took months of laborious investigation to clarify the ultimate ownership of the group’s assets and liabilities and to work out the best way to unwind the massive portfolio of short- and medium-term insurance policies without disrupting the market. Many of Anbang’s assets and property rights were registered under the names of Wu Xiaohui and his affiliates, which meant regulators had to resort to civil and criminal litigation to recover them.

The new company, Dajia Insurance Group, was announced in June 2019, and the goal was to turn it into a profitable business that would attract strategic investors and allow China Insurance Security Fund Co., the state insurance protection fund which had injected 60.8 billion yuan into Anbang when it was seized by the government, to exit and recover its money.

The rump of the original business, mostly comprising almost 800 billion yuan of insurance policies along with other assets linked to its disgraced founder Wu, including stakes in Chengdu Rural Commercial Bank, would be retained in the old Anbang. The insurance operation would be placed into run-off, with no new insurance policies underwritten and old policies repaid on maturity, Anbang’s financial license would be cancelled and the company eventually shut down.

The short- and medium-term insurance policies retained by the old Anbang were a ticking timebomb. They were sold from 2015 to 2017 and were all due to pay out by the end of 2020, but there was a dangerous mismatch with the assets backing those policies which were mostly long-term illiquid holdings. To ensure maturing policies were paid in full and to avoid market disruption, the restructuring team sold off financial licenses and non-core assets and used the proceeds to repay a large chunk of the 800 billion yuan. Billions more were raised through bank loans from lenders including China Construction Bank Corp. and Bank of Shanghai Co. Ltd.

One of the main tasks of the restructuring operation was to raise cash by selling Anbang’s assets.

Dajia Insurance made good progress. In the second half of 2019, it sold part of Anbang’s stakes in state-owned China State Construction Engineering Corp. Ltd. and real estate developer China Vanke Co. Ltd., raising a total of 11 billion yuan. In November, a 1.65% stake in Shanghai- and Hong Kong-listed China Merchants Bank Co. Ltd. was let go for 14.7 billion yuan. A portfolio of luxury hotels which Anbang had bought from Blackstone Group for about $5.5 billion in 2016 was sold for an estimated $5.8 billion.

But the old Anbang was a different question. Efforts to sell stakes in listed companies were often frustrated by opaque ownership structures, difficulty in tracking the ultimate ownership of some of the liabilities attached to the assets, and by falling asset values.

Anbang had built up a 55.5% stake in Chengdu Rural Commercial through various vehicles and related companies. In December 2018, the first attempt was made to sell a 35% stake held directly by Anbang for 16.8 billion yuan. But there were no takers. A year later, the restructuring team tried again, this time offering the full 55.5% holding, including 20.5% held by 10 related companies of Anbang, for 26.2 billion yuan. But it still hasn’t been able to offload the shares because of disputes over the ownership of some of the assets resulting from the tangled web of interconnected deals between the insurer and the bank, sources with knowledge of the matter have told Caixin.

One key obstacle lies in the 9 billion yuan of loans Anbang took out with the bank to fund its overseas spending spree. The assets and property rights bought with the loans were registered under the names of Wu and related parties as personal assets, instead of Anbang. The restructuring team is still trying to recover the assets and have pulled them from the sale.

Anbang invested a total of 130 billion yuan overseas on 15 separate purchases, including hotels, office buildings, banks and insurance companies, Caixin has learned. Eight have been disposed of, and three are in the process of being sold, which will in total recover 80 billion yuan based on their agreed sales prices, people familiar with the matter told Caixin.

The Waldorf Astoria Hotel, one of four overseas projects transferred to Dajia Insurance, will be put up for sale after renovations to turn some of the building into high-end apartments are finished in April. The refurbishment, which began in 2017, has cost around $1 billion dollars and sources close to the deal told Caixin it’s difficult to estimate how much the sale will raise in the current climate.

It’s taken two years to dismantle Anbang, defuse the company’s debt crisis, carve out the bad assets and turn the rest of the company into a viable business. Although the work has not finished — sources have told Caixin the restructuring will take another three to six months — enough progress has been made to allow the regulators to meet the deadline set by the government. On Feb. 22, the second anniversary of the state’s takeover, the CBIRC announced that Dajia was now operating as an independent business and was close to introducing new strategic investors.

The new shareholders are likely to be a domestic privately held company, a state-owned enterprise, and a foreign entity, who will each take a stake of around 20% in Dajia, sources close to the Anbang takeover working group told Caixin. The China Insurance Security Fund Co., which held around 98% of Dajia in May 2018, will remain the company’s biggest single shareholder, at least during a temporary transition period, with a stake of around 33%, the people said.

Anbang’s explosive rise was made possible by a combination factors — government policy to expand the insurance sector and introduce more competition, lax oversight, and a corrupt regulator. Xiang Junbo, who headed the China Insurance Regulatory Commission from 2011 until his downfall in 2017, transformed the industry from a boring, sleepy provider of low-risk policies by encouraging innovative and aggressive companies who took advantage of weak regulation to embark on debt-fueled expansionswith little regard for the risks they were injecting into the financial system.

Anbang was a child of its time. The regulatory storm unleashed on the financial sector in 2017 to rein in risks and curb debt, along with an overhaul of the regulatory framework that saw the banking and insurance watchdogs merged and a new financial stability authority set up, are designed to make sure it never happens again.

A previous version of this story misstated when the China Insurance Security Fund held its stake in Dajia. The fund held around 98% of Dajia in May 2018. The story has also been updated to clarify that Anbang’s liabilities exceeded its assets by 82.8 billion yuan at the end of June 2018.