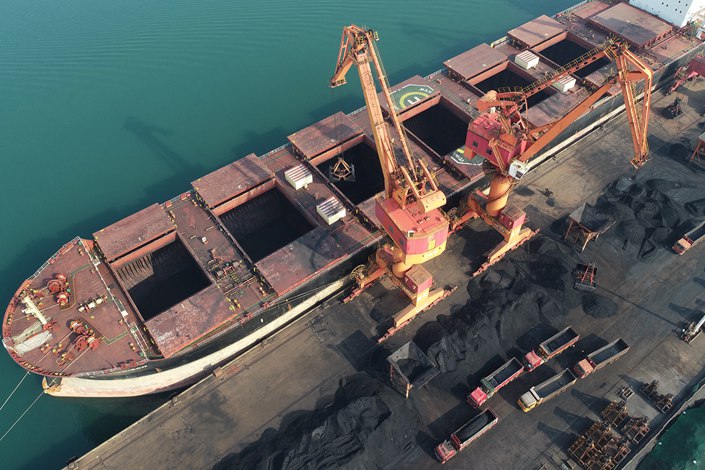 Coal prices in China have spiked to a year high, hovering in a government designated “red zone” for the last two months, as a strict inspection regimen at home and plunging imports amid tensions with a top foreign supplier cause stockpiles to plunge.

A major index compiled by the China Coal Transport and Distribution Association put the average price of coal on Wednesday at 621 yuan ($94) per ton, up 12.5% from a year earlier. Similar indexes compiled by Fenwei Digital Information Technology and the China Electricity Council posted similar levels, with prices up between 12% and 14% from a year-ago.

Coal futures contracts were even higher, with a December contract for thermal coal from the Zhengzhou Commodity Exchange going for 636.6 yuan per ton on Wednesday.

The current levels, which have been above 600 yuan per ton since September, are in a “red zone” as outlined previously by China’s state planner. A document issued by the National Development and Reform Commission in 2017 said 535 yuan per ton should be a target price for coal prices, which would ideally float in a range of 500 yuan to 570 yuan. Anything above 600 yuan or below 470 yuan was considered a “red zone,” the document said.

The rising prices directly reflect shrinking stockpiles of the fossil fuel. Between Nov. 23 and Nov. 25, stockpiles at four major Bohai Rim ports fell to 14.96 million tons from 15.13 million tons, a drop of about 1.1%. As of Wednesday overall stockpile levels were down 27.6% from the same time a year earlier.

On the one hand demand is being driven higher by seasonal factors, including greater need for electricity during the cold winter months. During that period higher demand for coal-fired power is amplified by lower supplies from hydropower as water volumes go down with the freezing weather.

On the supply side, domestic coal is getting held back from the market by a government program involving increased safety inspections. Compounding that shortage, recent accidents in the Shaanxi city of Tongchuan and the city of Shuozhou in nearby Shanxi province have led to increased inspections, also limiting supplies.

At the same time China has been holding up imports that could help to fill the gap, without any clear signal that it might loosen those restrictions soon. Customs data show that in October, coal imports totaled 13.7 million tons, down 46.6% from a year earlier and representing a 26.5% drop from the previous month.

The plunging exports come amid high diplomatic tensions between China and Australia, one of its major coal suppliers. More than 50 vessels anchored off Chinese ports have been waiting a month or longer to offload more than $500 million worth of coal from Australia, according to separate analyses of shipping data conducted by Bloomberg.

The stalled cargo is victim of China’s blacklisting of a wide swathe of Australian commodities and foodstuffs, ratcheting up tensions between the two trading partners that have deteriorated since Huawei Technologies Co. Ltd. was barred from building Australia’s 5G network in 2018. Chinese power stations and steel mills were told to stop using Australian coal and ports were instructed not to offload the fuel, Bloomberg reported in October.