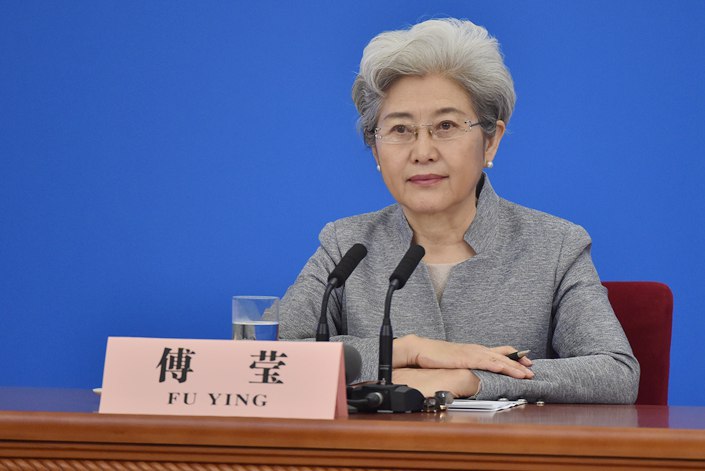 A former Chinese vice foreign minister proposed that China and the U.S. develop a relationship of “cooperative competition” in a New York Times commentary published Tuesday that the newspaper’s opinion page editor described as containing “both veiled threats and olive branches.”

Fu Ying, China’s vice foreign minister from 2009 to 2013, said that “each side must accurately assess the other’s intentions” to avoid misperceptions that could lead to confrontation.

Fu, currently a vice chairwoman of the foreign affairs committee at the National People’s Congress, China’s legislature, said that “China does not want to replace U.S. dominance in the world. Nor does China need to worry about the United States changing China’s system.”

“Even if competition between China and the United States is unavoidable, it needs to be managed well, cooperatively,” Fu said, “It is possible for the two countries to develop a relationship of ‘coopetition’ (cooperation + competition) by addressing each other’s concerns.”

In explaining the New York Times’ decision to publish Fu’s commentary, Kathleen Kingsbury, the acting editorial page editor, said the piece served as an official statement from Beijing about how it would like to set the terms for dealing with the incoming Biden administration.

“So far, this Op-Ed is the only official statement, beyond the usual platitudes, that has come from the government about the election of Joe Biden to the presidency, and for that reason we thought it was worth publishing,” Kingsbury said.

Fu is “an important person in China’s government — much more important than her titles convey,” Kingsbury said. “She is among the highest-ranking women in China and generally considered a moderate.”

The positions outlined in Fu’s commentary, which include “both veiled threats and olive branches,” could have “significant consequences for American foreign policy for the rest of our lifetimes,” Kingsbury said.

In the commentary, Fu said: “It is important that Beijing listen to and address the legitimate concerns of American companies in China, such as their calls for better intellectual property protection, cybersecurity and privacy.”

Meanwhile, Fu warned Washington of “interfering” in China’s domestic affairs. “China finds it offensive when the United States points a finger at the Chinese system or takes action against Beijing for its policies on domestic matters,” she said.