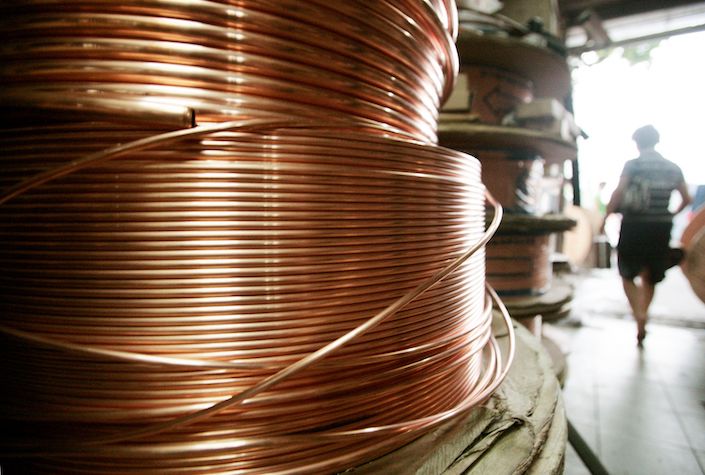 Copper tubing is for sale at a store in Shanghai

(Bloomberg) — Copper closed near its highest price since 2014 as investors weighed robust demand from China against U.S. jobless data and the long-term effects of the pandemic.

Strong demand from the world’s top copper consumer has put the market on track for a deficit when global copper inventories are at the lowest since 2014. China is likely to return to a more “proper” range of economic development next year, Premier Li Keqiang said Tuesday, indicating a strong rebound in growth after this year’s pandemic slump as the world’s second-largest economy continues to lead the global economic recovery.

“This is what traders want to see,” StoneX analyst Michael Cuoco said over the phone. “Copper is building a foundation above $7,000 which will allow the metal to go on to new highs.”

A wave of bullish factors propelled copper almost 60% higher from a March low, with a weaker dollar and recent promising vaccine developments setting prices up for an eighth monthly gain, the metal’s longest rally since 2011.

With the outlook for growth brightening, copper has the strongest fundamental footing among base metals, with prices likely to top $8,000 a ton next year, according to Bank of America Merrill Lynch.

The metal’s key role in the renewable energy transition is likely to fuel increasing consumption, with Jefferies LLC warning of “unmanageable” global deficits in coming years.

Some predict a pullback in prices despite strong demand. The U.S. recorded an unexpected rise in applications for state unemployment benefits in the first back-to-back increase since July, according to a report Wednesday, indicating that surging infections and increased restrictions are fueling a new wave of job cuts. A dimming U.S. economic outlook and a surge in coronavirus infections worldwide indicate progress on vaccines may not be enough to offset economic repercussions of the ongoing pandemic.

“Copper has been overbought for several days now,” ED&F Man Capital analyst Edward Meir said in a phone interview. “It’s been due for a pullback because there’s nothing really new in the market to drive it further. I’m not sure how much higher we can go and we expect there will be some rollback in prices as U.S. growth stalls.”