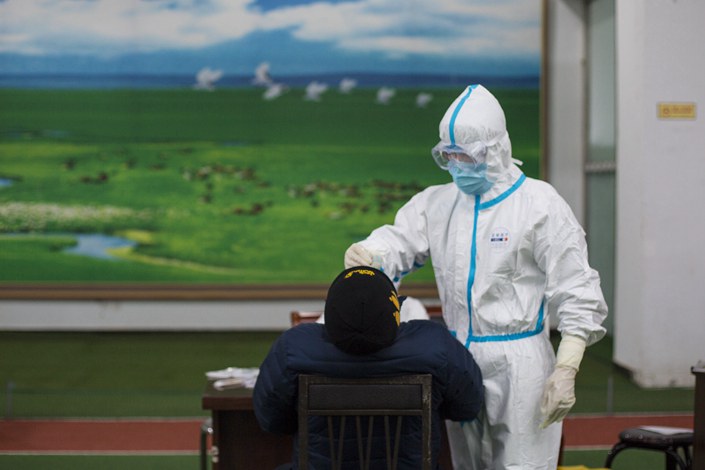 Cross infections of Covid-19 have been found among 14 positive cases, including three pairs of family members, four classmates and two groups of neighbors, local health authorities said. Photo: The Paper

The city of Manzhouli in North China’s Inner Mongolia autonomous region plans to test its entire population for Covid-19 again, after a multiple infection clusters were discovered in its first round of mass testing earlier this week.

As of Friday, the city has reported a total of 14 positive cases, including 11 confirmed Covid-19 patients, two suspected cases and one asymptomatic case, according to the local health authorities (link in Chinese). In China, a Covid-19 case is labeled “confirmed” only if the person shows symptoms of the disease.

Cross infections have been found among those positive cases, including three pairs of family members, four classmates and two groups of neighbors, local health authorities said.

The latest Covid-19 spike began with reports of two confirmed cases on Nov. 21. Mass testing was subsequently conducted on the city’s more than 203,000 residents from Sunday to Tuesday, which discovered the additional 12 confirmed cases.

The first two patients were infected by a strain of coronavirus very similar to that found commonly in Russia, according to Wang Wenrui, director of the city’s disease control and prevention center. Manzhouli sits on China’s border with its larger northern neighbor.

During a press conference on Thursday, Wang said that while origin tracing is still underway, initial results suggested that the latest outbreak could have been brought by inbound travelers from Russia.

The local government said that the city is launching a second round of mass testing starting at 2 p.m. on Friday afternoon.

Liu Li, deputy head of the Manzhouli police, said at the same press conference that trains and flights in and out of the city have been suspended.

However, he said residents could still leave the city with proof of a negative nucleic acid test conducted within seven days of departure.