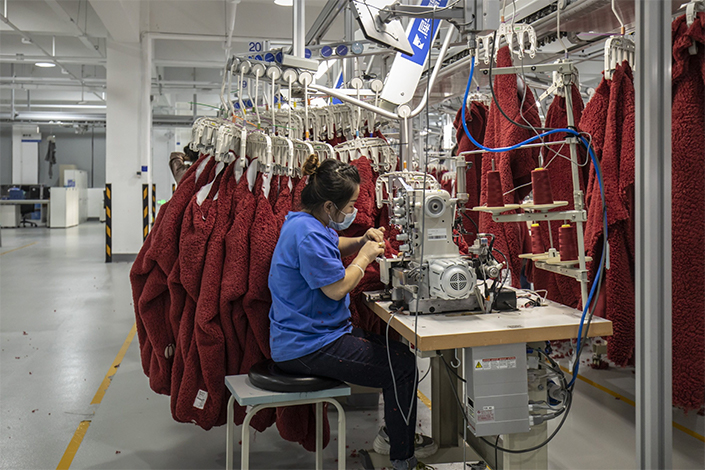 A worker uses a sewing machine on Oct. 13 on a garment production in Hangzhou, East China’s Zhejiang province. Photo: Bloomberg

(Bloomberg) — China’s economic rebound is gathering pace toward the end of the year, with an official gauge of manufacturing rising faster than expected in November, fueled by exports.

The manufacturing purchasing managers’ index rose to 52.1 in November from 51.4 the previous month, according to data released Monday by the National Bureau of Statistics. That was the highest since September 2017 and beat the median estimate in a Bloomberg survey of economists.

The data underlines China’s status as the only major economy to see a sustained and robust rebound from the pandemic-induced slump earlier this year. The pick-up in manufacturing orders was driven by strong domestic demand as consumer sentiment continues to recover — as well as an export boost ahead of the Christmas holiday period.

The nonmanufacturing gauge climbed to 56.4 from October’s 56.2, exceeding the median forecast and well above the 50 level that indicate conditions improved from the previous month.

China has managed to avoid a large-scale winter-resurgence of coronavirus, keeping small-scale outbreaks under control through mass-testing and quarantine. That contrasts with the U.S., Europe and Japan, where a resurgence of cases has led to forecasts of a “double dip” in economic activity this year.

“China’s domestic recovery has been on track in recent months, thanks to its successful containment of Covid-19, the relaxation of social distancing requirements, exceptionally strong exports,” Nomura Holdings Inc. economists, led by Ting Lu, wrote in a report. “We expect China’s official manufacturing PMI to remain solid at around 51-52 in coming months.”

A set of early indicators showed China’s economic recovery stabilized in November, underpinned by exports and the stock market’s gain to its highest since 2015. While consumption lagged in the early stages of China’s recovery this year, more recent data has shown a pick-up in consumer demand, while Beijing has vowed further measures to support sales of autos and home appliances.

Domestic and global demand is being buoyed by year-end and holiday purchases, Qian Wang, chief Asia-pacific economist at Vanguard Group Inc., said on Bloomberg TV. Momentum could start easing a bit in coming months, Wang said, noting that a resurgence in coronavirus cases globally could also weigh on export orders if lockdowns are extended.

China’s central bank has signaled in recent weeks that the sustained economic recovery will allow it to phase-out easing measures it introduced earlier in the year to support businesses. However, the transition is likely to be gradual and it signaled a willingness to ease fears about tighter cash supply by adding liquidity to the banking system Monday.

The People’s Bank of China offered 200 billion yuan ($30 billion) in loans from the medium-term lending facility at an unchanged rate of 2.95%, to help fill a funding gap for banks caused by a need to repay interbank debt and purchase newly issued government bonds.

“Looking ahead, the strength is expected to extend into year-end and into the start of the new year,” said Chang Shu, Bloomberg’s chief Asia economist. A stronger economy would allow the People’s Bank of China to begin a transition back to a neutral monetary policy stance — though a move away from a pro-growth stance is likely to a gradual and long process.”

Trade indicators also strengthened, with the PMI’s subindexes tracking export and import orders both rising from October. The data underlined that larger companies have recovered more strongly, with indexes for small enterprises lagging those for large and midsize companies.

Some businesses said profits and export orders are coming under pressure because of the stronger yuan, Zhao Qinghe, an economist with the statistics bureau said in a statement released with the data.