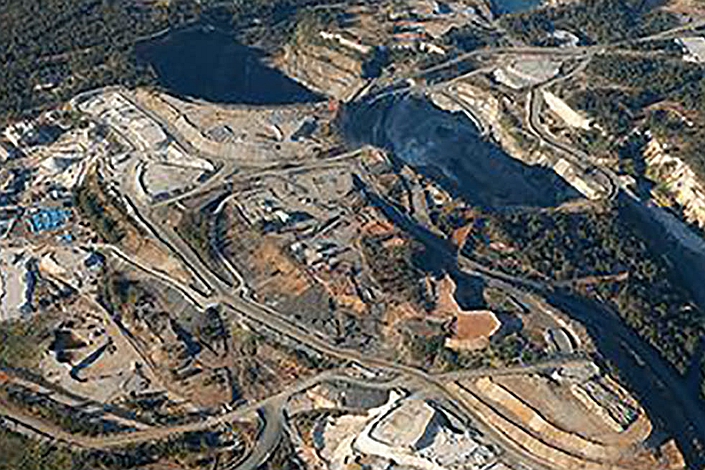 A lithium mine in Greenbushes, Australia, that is owned by a joint venture controlled by Tianqi Lithium. Photo: Courtesy of Tianqi Lithium Australia’s website

(Nikkei Asia) — China’s Tianqi Lithium Corp., one of the largest global lithium producers, said late Monday it has reached an agreement with lenders led by state-owned China Citic Bank Corp. Ltd. to extend the repayment of a $1.88 billion U.S.-dollar-denominated loan due at the end of November.

The accord is tentative, however, and it will only give the acquisitive Chinese company a reprieve of one month at most.

Tianqi Lithium’s substantial debt stems from it taking a minority stake in Chilean competitor SQM SA two years ago. The price tag was $4.06 billion for a 23.77% interest, and the bulk of the funding was provided by a $3.5 billion syndicated loan.

According to Monday’s disclosure on the website of the Shenzhen Stock Exchange, Tianqi and its subsidiaries have signed a letter of loan extension with the syndicate to defer payment until Dec. 28 or the day the amended loan agreement takes effect, whichever comes first.

When the amended agreement will become official is not clear, as the company said that “further active talks are being held to discuss crucial provisions.” The Sichuan-based company gave no details about these provisions, but it warned that a failure to enact the new accord “could lead to a default.”

A default could in turn trigger consequences, including penalty payments and the risk of assets being frozen, that would “influence ordinary production, management and business development, while adding a financial burden and pressure on cash,” the Chinese company’s board said in a statement.

Meanwhile, Tianqi is obliged to pay the unpaid interest on the loan by Dec. 10.

The company only held 1.29 billion yuan ($197 million) in cash on its balance sheet as of the end of September.

The purchase of a stake in New York-listed SQM was a headline-grabbing move at a time when the price of lithium was soaring on the prospect of strong demand for smartphones and electric vehicles. The Chinese company paid a 46% premium to become the top shareholder in a world leader on the other side of the globe, in line with its ambitions to lead the growing industry.

However, Tianqi’s rights as a major shareholder were restricted before the deal by an agreement with a Chilean antitrust agency, while its financial burden was heavy.

Moody’s Investors Service, which originally had an investment-grade rating for Tianqi, downgraded the company to junk status after the investment, followed by a series of additional downgrades to C-class earlier this year.

Other than the loan in question, Tianqi also has more than 3 billion yuan of short-term debt due within a year, over 13 billion yuan in long-term loans and a $300 million dollar-denominated bond that matures in November 2022, according to a disclosure last week.