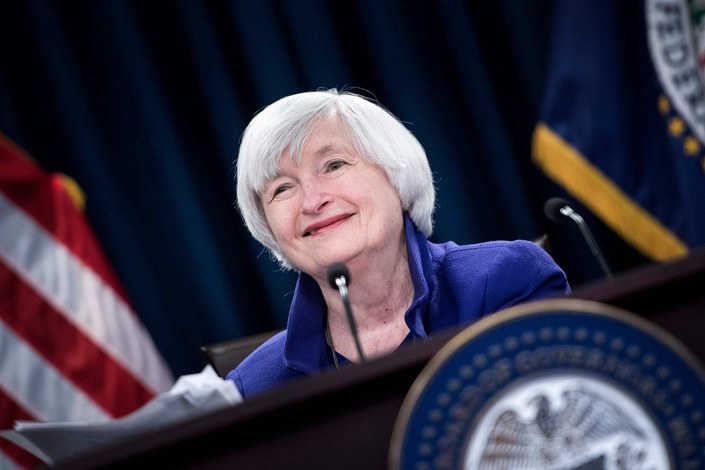 Yu Xiang is a visiting researcher of the Center for International Security and Strategy of Tsinghua University and a senior researcher of China Construction Bank’s research institute.

Yellen takes a pragmatic stance. She advocates that economic policies should be adjusted based on changes in the real situation. During her tenure at the Fed, Yellen pushed forward employment promotion as a core objective and was well known for her distinct dovish position. She advocated that the government and the central bank should enlarge economic stimulus to play a greater role in alleviating unemployment.

Yellen’s left-leaning, dovish stance is consistent with Biden’s, who advocates the use of fiscal policy to promote employment and to narrow the gap between rich and poor. By October, about 3.6 million Americans had been unemployed for at least 27 weeks, official data showed. The U.S. economy is still plagued by the Covid-19 epidemic.

Therefore, after Biden comes to power, the primary task is expected to be controlling the epidemic to help the economy recover. To reach that task, the new administration will likely rely heavily on fiscal stimulus, as the Fed’s monetary policy space has shrunk significantly following massive stimulus in the first half this year.

After Yellen takes office, one priority is expected to be a structural tax reform which increases tax for the rich and cuts tax for low earners. Currently, the rich are feeling less of the effects of the epidemic, while low-income people are struggling to survive.

However, Yellen will face many challenges in implementing fiscal policies. Firstly, it is doubtful whether she can roll out the large-scale stimulus package expected by the market. A smaller-than-expected stimulus package, even if it remains relatively large, will trigger market turmoil, especially in the financial market. The federal budget deficit soared to $3.1 trillion in the 2020 fiscal year through the end of September, with the deficit-to-GDP ratio reaching 16.1%, the highest since 1945, the final year of World War II. Thus, whether Congress will approve a Biden administration request to further expand spending remains to be seen.

The second challenge is whether Yellen can adapt to her new role as soon as possible. Both the Fed and the Treasury are core economic policymakers in the U.S., but the two agencies are different in many ways. The Fed focuses on monetary policy, while the Treasury focuses on fiscal revenue and expenditure, and also has the responsibility to issue some entity lists, impose international sanctions, maintain the dollar’s status as the world’s reserve currency and promote intergovernmental cooperation. That means the Treasury secretary not only needs to be a professional researcher, but also needs multitasking and communication skills. Currently, the U.S. is highly divided, thus Yellen needs to show her ability to resolve disputes and bring together various sides with different opinions and interests as soon as possible.

The third is whether Yellen can maintain the Fed’s independence while maximizing the effectiveness of fiscal policy. The 1913 Federal Reserve Act stipulates the Fed’s monetary policy can be independent of fiscal policy. However, under the leadership of current Fed Chairman Colin Powell the independence of monetary policy has been greatly weakened, and the Fed’s “pro-government” tilt is very obvious. The Fed may have an opportunity to strengthen its independence after the change of president. However, it is expected the Biden administration would need the Fed to keep loose monetary policy. And Yellen’s connections and influence at the Fed will enable her to exert greater influence on that policy. That is a good thing for the Biden administration, but it may affect the long-term stable development of the U.S. economy if the Fed is further affected by the White House.

The fourth is whether Yellen can promote a strong dollar policy. Robert Rubin, a former Treasury secretary, believes that a strong dollar strengthens the international leadership of the U.S. and brings lots of benefits. But the Trump administration has damaged the government’s creditworthiness and has affected the international recognition of the dollar’s long-term value. Also, it is expected that Yellen’s fiscal policies will likely mean the fiscal deficit remains large, which may further weaken the dollar.