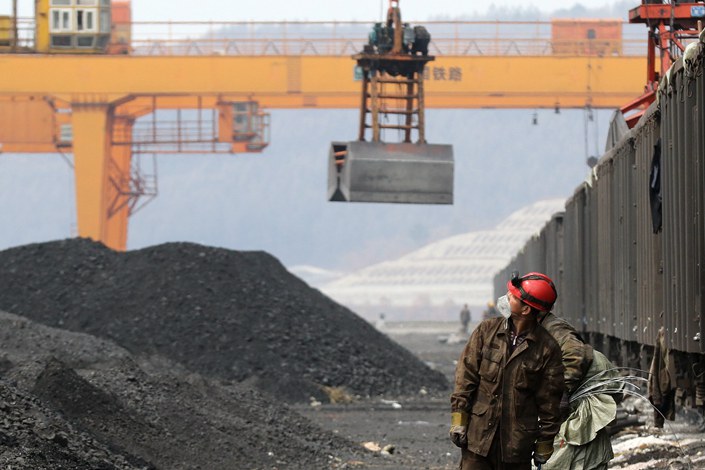 As of Thursday, coal stockpiles at four major Bohai Rim ports had fallen to 14.17 million tons, down 26% year-on-year.

Fenwei Digital Information Technology said Thursday that it would suspend updates for three major indexes it compiles that track retail spot transactions for thermal coal at Bohai Rim ports. The index put the average price of thermal coal on Wednesday at 639 yuan ($97.5) per ton, reaching its highest point this year.

The rise in thermal coal prices has pushed them into a “red zone” defined by China’s state economic planner, which says they should ideally float within a range of 500 yuan to 570 yuan per ton. Fenwei Digital cited unusual price fluctuations and weak spot trading, saying it will resume service “once trading in the market returns to normal.”

It is not uncommon for coal index providers to suspend updates when coal prices become particularly volatile. In April, when sluggish demand amid the outbreak of Covid-19 pulled prices down to 495 yuan per ton, the China Coal Transportation and Distribution Association also stopped updating a major index it compiled.

The market considers such suspensions a signal of government control. “Regulators are stepping in,” one coal trader in the Inner Mongolia autonomous region told Caixin.

But the apparent intervention has not had the desired effect — coal futures contracts on the Zhengzhou Commodity Exchange went even higher on the index suspension news, with January contracts rising to 688 yuan per ton on average Friday.

The winter heating season has brought a spike in demand as both domestic production and foreign imports have slowed.

Tightened safety inspections have held up coal miners in China, whereas the government has also been holding up imports that could help to fill the gap, without any clear signal of when it might loosen restrictions. Customs data show that in October, coal imports totaled 13.7 million tons, down 46.6% from a year earlier and representing a 26.5% drop from the previous month.

That left stockpiles of the fossil fuel shrinking, As of Thursday, stockpiles at four major Bohai Rim ports had fallen to 14.17 million tons, down 26% year-on-year.