By Wang Liwei and Timmy Shen 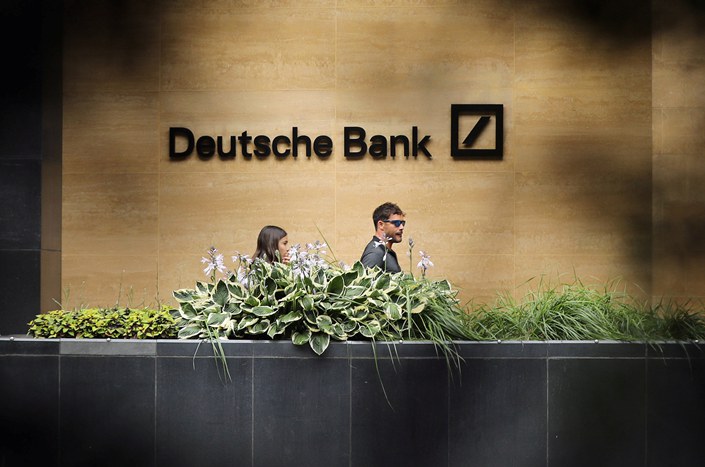 People walk past a Deutsche Bank office in London on July 8.

German lender Deutsche Bank AG is undergoing a radical transformation after five years of underperformance and will become more “aggressive” in China, its local head of operations said.

Rose Zhu, chair of Deutsche Bank (China) Co. Ltd., said in a recent interview with Caixin that the German lender’s short-term goal is to turn a profit this year, and it will take a “more aggressive position” after adopting a more conservative stance over the past few years.

Deutsche Bank has been struggling in the past few years and recorded losses in 2015, 2016, 2017 and 2019, and a small profit in 2018. The poor performance prompted CEO Christian Sewing to announce in July 2019 a three-year strategic transformation, aiming to shed noncore operations, downsize its investment banking business and cut total costs by a quarter by 2022.

The overhaul appears to have had the intended effect. Deutsche Bank was profitable in each of the first three quarters of this year. Despite the fallout of the Covid-19 pandemic, the bank booked a profit of 309 million euros ($374 million) in the third quarter, compared to a net loss of 832 million euros the year before.

“In the fifth quarter of our transformation, we not only demonstrated continued cost discipline, but also our ability to gain market share,” Sewing said in an October statement following the release of the third-quarter results.

As part of the restructuring, Deutsche Bank has taken actions to exit equities trading and created a “Corporate Bank” business division comprised of its global transaction business and German commercial banking business.

Another major focus is to reduce adjusted costs by about 6 billion euros by 2022. Moody’s Investors Service Inc. suggested in a Nov. 3 report that the bank had achieved about half of that target. It will “increasingly benefit from a lower restructuring burden,” Moody’s analysts said.

“This will allow DB (Deutsche Bank) to continue exiting unwanted businesses without having to accept ‘fire sale’ prices in more volatile markets, and instead focus on sustaining its revenue base in an ever changing macroeconomic environment,” the analysts said.

Deutsche Bank’s progress on its transformation plan prompted Moody’s on Nov. 3 to lift its credit ratings outlook to stable from negative.

Foreign financial institutions have been eager to enter China’s market amid the country’s financial opening-up, but Deutsche Bank has not been seen as particularly active.

Zhu said that “in the past we had held a more defensive stance, but we’ll gradually take a more aggressive position starting from this year.”

She explained the bank will continue to build its own wealth management and asset management teams and at the same time deepen its cooperation with local partners. For example, it has cooperated with Chinese asset manager Harvest Fund Management Co. Ltd. for 15 years, controlling a 30% stake in Harvest Fund.

In 2009, Deutsche Bank and Shanxi Securities Co. Ltd. jointly set up Zhong De Securities Co. Ltd., as part of the German lender’s China expansion. “We’re quite content with the cooperation, which has strengthened our localization capability,” Zhu said.

Zhu said that bond business is one of Deutsche Bank’s strengths, and the bank will further build its team and obtain relevant licenses. The transaction value via the Bond Connect program — which links the Hong Kong and Chinese mainland bond markets — facilitated by Deutsche Bank ranks second among all foreign banks so far this year, according to the bank.

“Because of our strategy of not setting up retail banking in China, our overall scale in China may not be comparable to those of some other foreign banks, but we have quite a large presence in our core business areas in China, such as bond businesses,” Zhu said.

The bank has also applied to China’s securities watchdog for a fund custody license, which would allow it to provide custody services for fund products in China. In August, a China subsidiary of U.S. banking giant Citibank NA was granted such a license.

The cost cutting in Deutsche Bank’s transformation has not significantly impacted its China operations. Zhu said that much of the staff layoff and cost reduction were in the stock market business, which the bank only operates in other markets, adding that it has actually hired more employees in China.