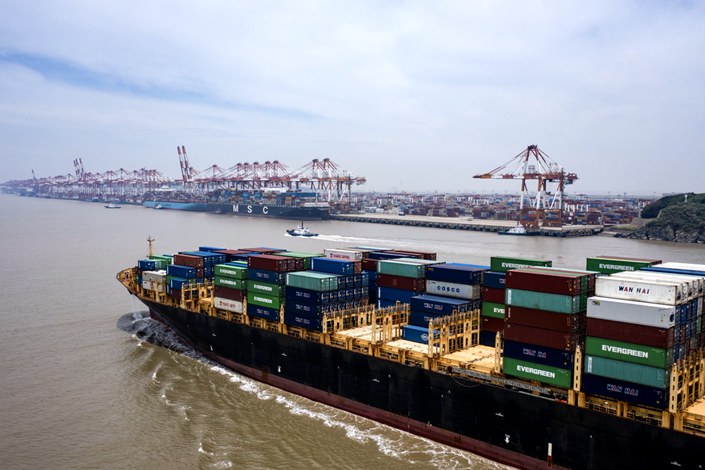 A ship loaded with containers approaches the Yangshan Deepwater Port in Shanghai on July 12. Photo: Bloomberg

(Bloomberg) — China’s exports jumped in November by the most since early 2018 as year-end demand surged, pushing the trade surplus to a monthly record.

Exports rose 21.1% in dollar terms in November from a year earlier, the most since February 2018, while imports gained 4.5%, the customs administration said Monday. That left a trade surplus of $75.4 billion for the month, which was the largest on record in data going back to at least 1990. Economists had forecast that exports would increase by 12% while imports would grow by 7%.

• Global demand had started recovering before the latest resurgence in virus cases in some of China’s biggest markets, including the U.S. and Europe. South Korea’s exports, a bellwether for global trade, strengthened in November, while China’s latest purchasing managers’ index showed a pick-up in new export orders

• The new virus waves in Europe, the U.K. and elsewhere may further fuel demand for China’s exports of personal protective gear and work-from-home devices, a key driver of export growth so far

• “The export boom is one of the biggest economic surprises this year regarding China’s outlook,” with China benefiting from effective containment of the virus and strong Christmas orders, said Zhou Hao, an economist at Commerzbank AG in Singapore. “Imports are slightly weaker than expected, which shows that the infrastructure spending might need to take a break as the winter is approaching”

• As the year-end approaches, China needs to ramp up its imports from the U.S. to meet the terms of the phase one trade deal, but the latest data showed that China is nowhere near meeting the target. U.S. president-elect Joe Biden recently said that he wouldn’t quickly remove tariffs imposed by the Trump administration and will consult allies before developing a China strategy

• Exports of medical equipment in the January-November period jumped 42.5% in dollar terms from a year ago, while that of textile yarn, fabric and its products grew by 31%

• Imports of iron ore in the first 11 months of this year rose almost 10.9% from the same period in 2019, while soybean purchases from overseas climbed 17.5%