By Qin Jianhang and Yang Ge 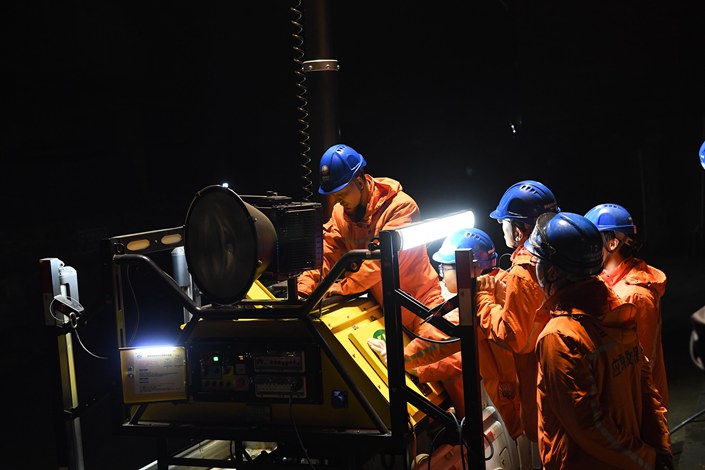 A major accident at a coal mine being dismantled in the municipality of Chongqing has left 23 people dead, prompting Beijing to send a team to the area after another accident just two months earlier also resulted in more than a dozen deaths.

The latest accident on Friday at the Diaoshuidong mine in Yongchuan district prompted the State Council, China’s cabinet, to send members of its coal mine safety committee to the area to conduct an interview on Dec. 6, according to a report on CCTV, the country’s main national broadcaster. The team was aiming to better understand what led to the recent accidents, and take measures to curb any problems.

The Diaoshuidong coal mine had been closed for more than two months, and its operator was in the process of dismantling equipment on the site at the time of the accident. Twenty-four people became trapped inside as a result of carbon monoxide buildup, only one of whom was successfully rescued.

A Chinese media report said the mine was already financially troubled, and many of its employees hadn’t been to work in the last two months as the operation prepared to close down. One person at the scene told a Beijing News reporter that of the 24 people trapped people, 16 weren’t employees of the mine and had come from the nearby town to help dismantle the mine’s equipment.

The mine, which was built in 1975 and sold to private owners in 1998, had been involved in another poisoning event in 2013 involving hydrogen sulfide that left three people dead and two injured, according to public sources. The mine had been frequently cited by Chongqing officials this year for safety violations and hidden dangers.

Before the most recent accident, another similar incident occurred in late September at the Songzao coal mine, also in Chongqing. In that instance, a belt carrying coal caught fire, causing the coal to burn and producing toxic gases that led to the poisoning of people both above and below ground. In the end 16 people were killed and 38 suffered from inhaling toxic gases.

Last month, a flooding incident at a mine in North China’s Shanxi province owned by one of the nation’s top power producers also left five people trapped inside. And earlier in the month eight people were killed in another mining accident in neighboring Shaanxi province in the city of Tongchuan.

Such incidents used to be relatively common in China’s fragmented coal industry, especially at smaller collieries with more lax standards. But the number of accidents has gone down in recent years amid a broader Beijing-led campaign to close down smaller operations and consolidate the sector around a number of major, more professionally-run players.