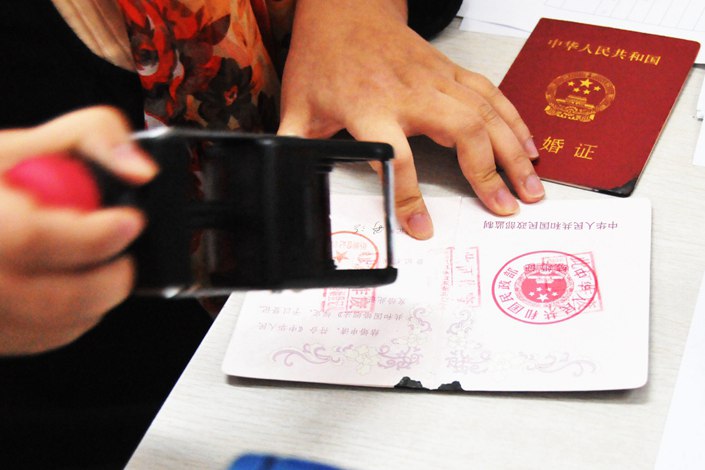 The Chinese government does not regularly publish national statistics on domestic violence rates.

China has fleshed out details of mandated “cooling-off” periods for couples seeking divorce, a policy that critics said could leave victims of violent and abusive relationships in greater danger.

The Ministry of Civil Affairs issued a notice (link in Chinese) Friday stating that couples who file for divorce will have to wait 30 days for official approval, during which time either party can formally withdraw their application. It added that couples who do not appear together before the authorities to obtain a divorce certificate within 30 days of finishing the cooling-off period “will be seen as having withdrawn their application.”

The new policy will take effect on Jan. 1 as part of China’s new civil code. While officials say the cooling-off period will prevent impulsive divorces, critics say it will obstruct the rights of those who want to split up and prolong the suffering of people — especially women — who are trapped in abusive or unhappy marriages.

China’s divorce rate is spiking while its marriage rate is slumping. According to government statistics (link in Chinese) published in September, the country recorded 6.6 marriages per 1,000 people last year, down from nine per 1,000 in 2015. The Asian nation also logged 3.4 divorces per 1,000 people in 2019, up from 2.8 per 1,000 five years ago.

Chinese officials have repeatedly said the cooling-off period will guard against overhasty divorces and protect the stability of marriages and family. The stipulation will only apply to couples who pursue a split by mutual agreement, not to those who do so owing to domestic-violence court cases.

At a press conference on Friday, Wang Jinhua, the head of the ministry’s social affairs office, said (link in Chinese) the cooling-off period would “increase the threshold for those who seek divorce recklessly or impulsively.”

But not everyone is on board with the policy. Feng Yuan, the director of the Chinese Women’s Research Society and a well-known women’s rights advocate, said the cooling-off period could make domestic violence victims who choose not to file lawsuits against their partners more vulnerable to being coerced into remaining in abusive marriages.

Ma Yinan, a Peking University law professor and the head of the China Law Society’s marriage and family law research body, said China could learn from South Korea’s example and consider curtailing or rescinding mandatory cooling-off periods in “emergency situations where violence has caused intolerable suffering to one of the parties involved in the divorce.”

The Chinese government does not regularly publish national statistics on domestic violence rates. A major survey (link in Chinese) carried out by the All-China Women’s Federation in 2011 found that one-quarter of married women in China had experienced domestic violence in some form.

The country passed an anti-domestic violence law in 2015, but critics have slammed what they see as its limited effectiveness and the lack of a broader social movement to combat violence against women.