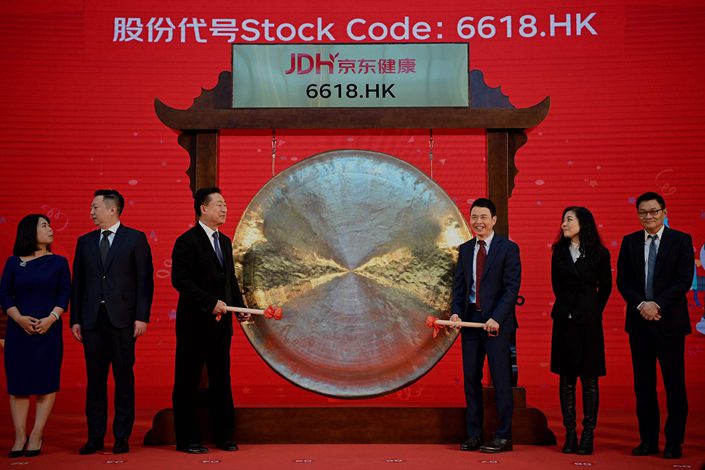 JD Health is the largest online health care and pharmacy platform by revenue in China, according to the company’s prospectus.

Shares of JD Health International Inc. soared in their Hong Kong trading debut on Tuesday, as investors flocked to the nation’s top provider of online health services that became the second publicly-traded unit of China’s No. 2 e-commerce firm JD.com Inc.

The debut capped a strong performance for the stock, which had already priced at HK$70.58 ($9.11), representing the top of its IPO range. The stock immediately jumped more than 30% when Tuesday trading began in Hong Kong, and was up as much as 70% late in the day before giving back some gains to end up 56% at HK$110. The company raised $3.5 billion, making it the largest new listing this year by a health care firm in Asia.

“The strong performance of the IPO looks like a real shot in the arm for weak sentiment after the Ant IPO hangover,” said one analyst at a mid-sized brokerage, referring to the 11th-hour collapse last month of what was expected to be the world’s biggest IPO of all time by Alibaba affiliate Ant Group, also in Hong Kong. “With Covid-19 cases surging locally, the combined telemedicine and online pharmacy themes look like the right prescription to drive investor demand,” he added.

The offering of 381.9 million shares was the second-largest IPO this year for Hong Kong, after only the HK$30.1 billion secondary listing by JD Health’s parent, JD.com, in June. Also in June, JD.com’s grocery delivery arm Dada Nexus raised $320 million in a Nasdaq IPO. Since then that stock has more than doubled from its IPO price.

JD’s fintech arm, Jingdong Digits, also filed in September for an IPO on Shanghai’s year-old STAR Market. That plan is still awaiting approval from China’s securities regulator, and could also be delayed by China’s tighter draft online microlending regulations that also led to the abrupt pulling of the Ant Group IPO in November.

JD.com’s logistics arm, JD Logistics, has also asked banks to pitch for its Hong Kong IPO to raise up to $3 billion as part of plans to launch a deal in the first half of 2021, Reuters reported earlier this month.

The JD Health offering attracted 846,200 retail investors, who subscribed for 420 times more than the shares allotted to them. Institutional investors also showed enthusiasm, with 30 times oversubscription for that portion of the deal.