By Wang Jing and Anniek Bao 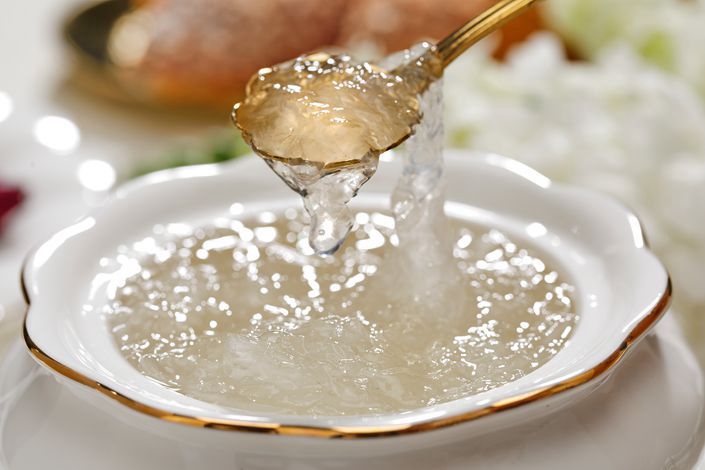 Bird’s nest, which is among the world’s most expensive foods, is made from the saliva of a type of bird called the swiftlet found in hard-to-reach crannies of limestone caves.

Chinese authorities are investigating one of video-sharing app Kuaishou’s most popular livestreamers after he was accused of marketing fake bird’s nest — a luxury health product in China — made of just sugar and water.

A spokesperson for the market regulation bureau in Guangzhou’s Baiyun district has told Caixin it is looking into the matter.

Bird’s nest, which is among the world’s most expensive foods, is made from the saliva of a type of bird called the swiftlet found in hard-to-reach crannies of limestone caves. It is prized in China for its supposed nutritional and disease-fighting properties, though the scientific evidence for these remains slim.

Xin, who goes by the name “Simba,” is the livestreaming sales champion on Kuaishou, after he sold a record 1.25 billion yuan ($191 million) worth of products in one session during a sales extravaganza this year.

This was roughly one-third of Kuaishou’s gross merchandise volume from e-commerce for the year. Xin has over 53 million viewers on the platform, mostly from less developed cities in China.

“This means it is in fact ‘sugar water’,” Wang said.

He also pointed out the protein level required for a bird’s nest product to be certified is between 30% and 50%, but, according to what is shown on the packaging, there is no protein in this product.

But while genuine bird’s nest is typically about 10% sialic acid, Wang Hai’s tests found the product Xin was promoting was less than 0.00014% sialic acid.

A week later, Xin conceded in a public letter. “This item should not be promoted as being made of bird’s nest, but only as a flavored drink,” Xin said in the letter, which blamed “exaggerated promotional information” from a supplier that he said his team had failed to check.

He said all the bird’s nest items would be recalled and consumers would be compensated to the value of three times what they paid and offered a refund.

According to Xin’s letter, the supplier of the product — Guangzhou Rongyu Trading Co. Ltd. — claimed there was no quality issue. It said the company had avoided meeting with his team, “engaging in conversation, or providing a solution.”

Wang, however, insisted it was not a matter of exaggeration, but “false promotion” and consumers should be compensated to the value of 10 times what they paid for the product, as well as given a refund.

After years of cracking down on counterfeits, Wang has consistently questioned the quality of different merchants and products pitched by Xin on his Weibo since last year.

The local government in Guangzhou has ramped up efforts to develop its livestreaming e-commerce industry, aiming for 100 multi-channel networks, 1,000 internet-focused brands, and 10,000 trained livestreaming salesmen within two years.

But regulators around the nation do not appear to be equipped to handle the overwhelming growth of consumer complaints against livestreaming e-commerce companies. Over 330,000 consumers’ complaints were made online nationally in a 20-day period up to Nov. 15.

A spokesperson for the market regulator confirmed it was looking into Wang’s claims. Xin’s team couldn’t be contacted by Caixin.

Guangzhou Rongyu went through a senior management overhaul at the end of last month, with changes in shareholders, chairperson, legal representatives and board members. A company spokesperson told Caixin he had never heard of this issue with their bird’s nest product.