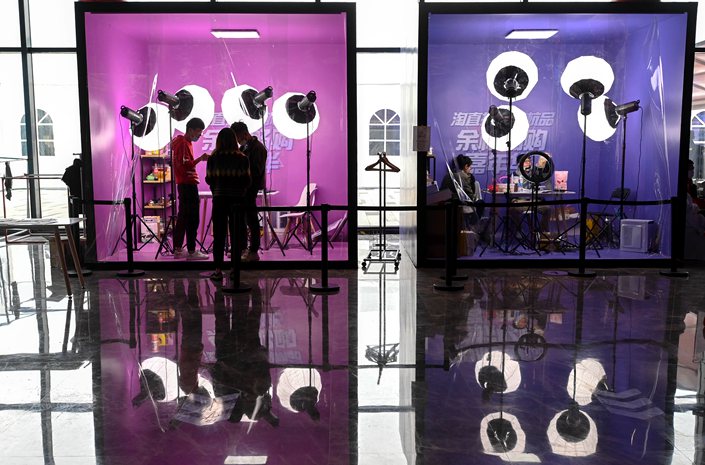 Livestreaming stations are set up in Hangzhou on April 19.

Livestreaming e-commerce took off in China in 2019, creating celebrity livestreamers who have grown so adept as pitchmen that they can sometimes sell out the entire inventory of a product during a single sales session.

The gross merchandise volume (GMV) sold via livestreaming events more than tripled last year to more than 400 billion yuan ($56.5 billion), according to a report by consulting firm Bain & Co. But this new trend in e-commerce, in which hosts sell products over livestreaming platforms like Kuaishou, didn’t become prominent in China until the height of the country’s coronavirus outbreak, when brick-and-mortar stores closed and consumers found themselves stuck at home. It has remained popular even after the virus was brought under control.

However, the country’s consumer watchdog has begun reporting a growing number of customer complaints, and regulators and online platforms do not appear quite ready to meet the challenges posed by this new style of marketing.

During this year’s sales extravaganza known as “618,” livestreamer Viya sold about 130 million yuan worth of products each session in the first three days of the event, according to data analytics firm Udaren. Fellow livestreamer Li Jiaqi, known as the “lipstick king” for not being shy about trying on the makeup he’s hawking on camera, sold about 110 million yuan per session. The two are the biggest stars of livestreaming e-commerce, boasting a combined GMV of over 10 billion yuan in 2019, an investor in a leading agency for the livestreaming business told Caixin.

But the less well-known livestreamer Xin Youzhi, who pitches products on Kuaishou, might be China’s true livestreaming sales champion. Xin, who calls himself “Simba,” and his team sold 1.2 billion yuan in products last year, according to the investor, almost one-third of Kuaishou’s total GMV in e-commerce for the year. During a nine-hour livestreaming marathon on June 14 for Kuaishou’s midyear promotion, it took five hours and nine minutes for him to sell more than 1 billion yuan in products.

Besides Viya, Simba and the lipstick king, others including business leaders, TV personalities and even the odd government officials have joined streaming platforms to take advantage of the trend. More than 4 million livestreamed e-commerce sessions were broadcast in the first quarter of this year, according to the Ministry of Commerce.

On June 1, Dong sold more than 6.5 billion yuan worth of Gree products in her all-day livestream session on multiple platforms, including Kuaishou and JD.com.

In her first livestreaming sales attempt in late April, Dong, a well-known Chinese businesswoman who heads appliance-maker Gree Electric Appliances Inc., rang up 230,000 yuan in sales, a paltry amount she later attributed to “inexperience” and “a lack of preparation.”

Despite her lackluster first attempt, she kept at it and her determination paid off. In May, Dong’s next livestream on Kuaishou netted around 310 million, followed by a 703 million yuan effort on JD.com. Dong’s experiments with unconventional promotions came amid a downturn in China’s market for air conditioners, which Gree Electric leads. In 2019, Gree Electric’s air conditioner sales revenue fell 10% to some 139 billion yuan, dragging down the company’s total revenue growth to 0.02%, according to the company’s annual report.

Although Dong told her 30,000 brick-and-mortar dealers that her company would not abandon them, they could not help worrying about their future. The chairwoman said at the company’s annual meeting that online and offline sales channels were not necessarily in conflict, but integrating them would be the next incarnation of the retail business.

Dong also said that stores should gradually be converted into places to primarily display products and communicate with consumers. Some stores ran their own livestream promotions on the same day as Dong’s, offering the same discounts.

The report, based on an online survey of 5,333 consumers on 12 livestreaming platforms from January to March, highlighted the market’s rapid growth, but also pointed to problems such as exaggerated promotional claims and substandard products. The report warned that livestreaming events can encourage compulsive buying, but don’t offer the same after-sales protections because the business is still maturing.

Some industry groups have started to make their own rules to push the industry to better regulate itself before the government steps in. On July 1, the China Advertising Association (CAA) announced new industry rules for marketing during livestreaming events in response to complaints about unscrupulous practices.

The CAA asked merchants to show licenses for all the products and services they provide, as well as for livestreamers, to make sure the claims they make about the products they sell are true. The rules also prohibit livestreamers and livestreaming platforms from releasing false data about how many people watch a livestreaming session or make purchases during one.

Nonetheless, the rules do not carry the force of law because the CAA is only a self-regulating industry group.

The central government is also working on formal standards for livestreaming e-commerce, but the process could easily take two years or more, a source close to the matter told Caixin.

Meanwhile, legal experts basically agree that livestreaming e-commerce is a form of advertising that should be subject to the same rules governing other types of marketing, but industry insiders said disagreements remain over how to divide responsibility between the livestreamers, merchants and online streaming platforms.

In addition to holding merchants and e-commerce platforms accountable, some observers advocate that video service providers such as Kuaishou and Douyin should also be regulated for the role they play in these online sales sessions.

Livestreamers who promote and sell products on these platforms should be identified as e-commerce business operators as well, while video platforms, once identified as only participants in the new form of e-commerce, should commit to the management responsibilities laid out in the country’s latest E-Commerce Law, said Wu Changhai, vice dean of the Capital Finance Institute at China University of Political Science and Law.