China’s Online Retail Sales Getting Back to Normal 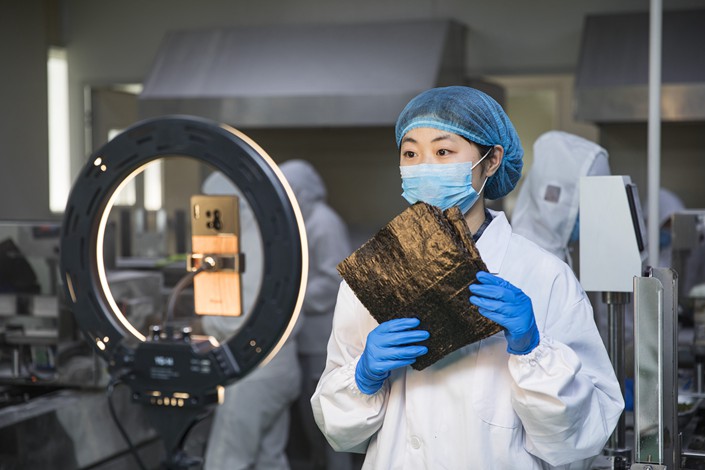 Livestreaming has grown to become a driving force in China’s e-commerce sector.

China’s online retail sector returned to business as usual in March, with livestreaming e-commerce leading the trend and online sales of physical goods growing faster than in the same period last year, the Ministry of Commerce said at a press briefing (link in Chinese) on Thursday.

Several major e-commerce platforms such as Alibaba and JD.com reported total online retail sales growth of around 10% year-on-year in March, according to ministry spokesman Gao Feng. For the first quarter as a whole, online retail sales slipped by 0.8% year-on-year to around 2.2 trillion yuan ($310.8 billion), according to data from the National Bureau of Statistics. The figure is 2.2 percentage points lower than the decrease that occurred during the first two months of the year.

Agricultural products did particularly well as the Covid-19 pandemic kept many people away from brick-and-mortar food markets. In the first three months, online retail sales of agriculture products surged by 31% year-on-year to about 93.7 billion yuan. Fresh food in particular, including meat, eggs and vegetables, stood out — with online sales up more than 70% year-on-year, the ministry said.

Online sales of household necessities, kitchenware and fitness equipment grew by a combined 40% year-on-year in the first quarter. Online sales of automobiles, furniture, clothing and shoes shrank over the same period.

Based on the data it collects from about 3.5 million major online retail stores, the ministry said that 90% of e-commerce merchants had reopened for business as of Thursday. That figure is up 20 percentage points from the end of February.

Livestreaming has grown to become a driving force in China’s e-commerce sector. More than 4 million online sales promotion shows were livestreamed in the first quarter, the ministry said.