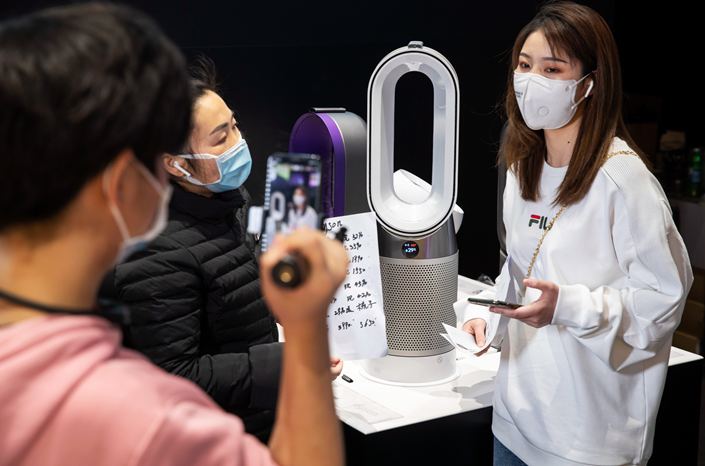 A saleswoman in a shopping mall advertises products via livestream in Zhengzhou, Henan province, on March 13. Photo: IC Photo

Livestreaming e-commerce had something of a coming-of-age moment Wednesday night when the indebted founder of a debt-ridden smartphone-maker debuted a show that drew plenty of eyeballs and garnered plenty of sales, even though the country’s consumer watchdog had warned about problems with the practice the day before.

Luo Yonghao, founder of Smartisan Technology Co. Ltd., announced in late March that the company would try out livestreaming e-commerce, the latest trend in the country’s robust online retail industry, as a way to generate sales and help repay his more than 100 million yuan ($14.1 million) in personal debts. His first try on ByteDance Inc.’s Douyin, the Chinese version of TikTok, received 48 million viewers in three hours, resulting in 110 million yuan in sales, according to Douyin.

Luo is just the latest business figure to get into livestreaming e-commerce, which is booming in China despite the coronavirus outbreak that has hobbled the economy and kept people away from stores in real life.

Pitching products online via livestreaming platforms has been around in China for a couple of years. It took off in 2019, creating celebrity livestreamers such as Li Jiaqi and Viya, who are so popular that sometimes the items they hype up end up going out of stock. Livestreaming e-commerce also contributed $2.85 billion in sales to Alibaba Group Holding Ltd.’s annual Double 11 online sales extravaganza last year.

The market for this niche segment grew to be 433.8 billion yuan in 2019, according to a report released Tuesday by China Consumers Association, a watchdog group sponsored by the central government.

The report, based on an online survey of 5,333 consumers on 12 different livestreaming platforms over the prior three months, elucidated the segment’s rapid growth, but also pointed out problems such as exaggerated promotion and substandard products.

The report warned that livestreaming shows can leave viewers prone to compulsive buying, but without the same after-sales protection because the business is still maturing. In the survey, 37.3% of consumers reported having problems with their purchases, but only 13.6% filed complaints because it was so complicated to do so.