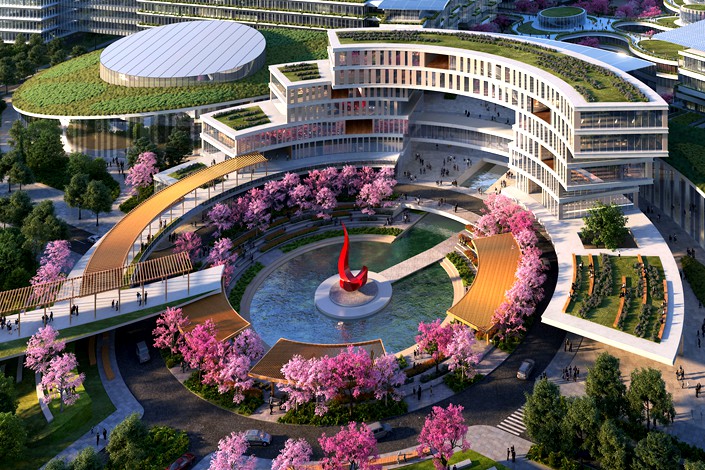 Sitting at the heart of Hong Kong University of Science and Technology’s (HKUST) Guangzhou campus is an exact replica of the university’s iconic “Circle of Time” sculpture, commonly known as the “red bird” for obvious reasons.

The “sustainable, smart campus” established by HKUST, the Guangzhou government and Guangzhou University will begin enrollment in September 2022, after being approved by the Ministry of Education last year.

It’s not the only Hong Kong institution “heading north” to neighboring Guangdong province, of which Guangzhou is capital. Several of the special administrative regions’ universities are doing the same, lured by tax and land incentives offered by the governments of cities including Foshan, Dongguan and Zhaoqing.

Guangdong local governments are hoping that Hong Kong universities will not only replicate their home institution’s artwork on their new campuses, but also their internationally recognized high standards, helping to boost the province’s lagging education sector and make the tech-producing region more innovative.

In part, the region sometimes touted as a challenger to Silicon Valley is trying to follow the example set by the original, where Stanford University, University of California Berkeley and San Jose State University churned out much of the talent that drove success.

Hong Kong universities’ move northward began at the turn of the century, when many set up graduate schools in Shenzhen. However the real forerunner of the current trend is Hong Kong Baptist University, which in 2005 teamed up with Beijing Normal University to open a campus in Zhuhai.

Then, in 2014, the Chinese University of Hong Kong (CUHK) opened a Shenzhen campus and soon became regarded as the tech hub’s top university. The success of CUHK (SZ) has often been attributed to its relative independence. According to public information, CUHK’s local partner, Shenzhen University, is not involved in any teaching, teacher recruitment or curriculum creation.

Besides the province’s largest metropolises, several smaller cities are also getting in on the act. Construction of a 30.7 billion yuan ($4.7 billion) Hong Kong Polytechnic University campus in Foshan was included in a province’s 2020 development plan.

The GBA is home to most of China’s Fortune 500 companies, especially those in technology like Huawei Technologies Co. Ltd. On top of this, the region also has a rich ecosystem of startups, incubators and accelerators in tech, biotech, health-tech and innovation.

In the 2020 QS World University Rankings, Hong Kong had five universities in the top 100, while in Chinese mainland there were six, mostly located in Shanghai and Beijing. No Guangdong university cracked the top 300.

“Even though Guangdong has the largest GDP in the country, abundant land and financial resources, its overall educational level is still low, especially when it comes to the degree of internationalization,” Zheng Wen, then director of the higher education department of Guangdong province from 2012 to 2019, said in March last year.

Lu Xiaozhong of the Greater Bay Area Education Development Institute of South China Normal University, said that Guangdong has the most higher education institutions of any region in China, but that it possesses quantity not quality.

Even so, its gross enrollment ratio — the proportion of young people receiving higher education — remains below the national average of 51.6%, sitting at 46% in 2019, though this represents significant growth from 28% in 2010.

While Hong Kong has 35 higher education institutions, the city’s relatively small pool of students, shortages of cash and high land prices have constrained their growth.

All three are in abundant supply across the border on the Chinese mainland. While Hong Kong’s University Grants Committee set a HK$1.5 billion ($193 million) grant budget for scholars and universities for 2018-2019, the Shenzhen government’s research budget was almost eight times higher.

Professor Guo Yike, vice president of Hong Kong Baptist University, told Caixin that while the city’s research environment is irreplaceable, the big budgets on offer across the border allows researchers the ability to focus on subjects that interest them, and also gives them the chance to apply their research to local tech companies.

Chan Wai-yee, former dean of the School of Biomedical Engineering at CUHK, cited innovative drug research and development as an example, saying that Hong Kong does not have the conditions to conduct experiments on large animals such as dogs and monkeys, and many pharmaceutical scientists find it impossible to complete preclinical studies in Hong Kong; in Hong Kong, it is also difficult to find a company that can help produce prototype samples, while the mainland’s production resources are obviously more abundant.

In terms of academic freedom and autonomy, tension exists between universities on the mainland and those in Hong Kong. Academic studies run into restrictions on the mainland, especially in the fields of humanities and social sciences. Therefore the curriculums of these mainland campuses have been a long-standing question.

CUHK Vice President Chan Wai-yee said that the Shenzhen campus “uses the same curriculum as the Hong Kong campus, and if they plan to have new curriculums it has to be approved by Senate Committee on Teaching and Learning of CUHK.” The campus is also able to offer internet access subject to fewer of the mainland’s content restrictions than other mainland universities.

That’s a greater level of independence than was offered to pioneer Hong Kong Baptist University, whose mainland curriculum needs to be approved by both its parent institution and the education authorities of the mainland and Hong Kong.