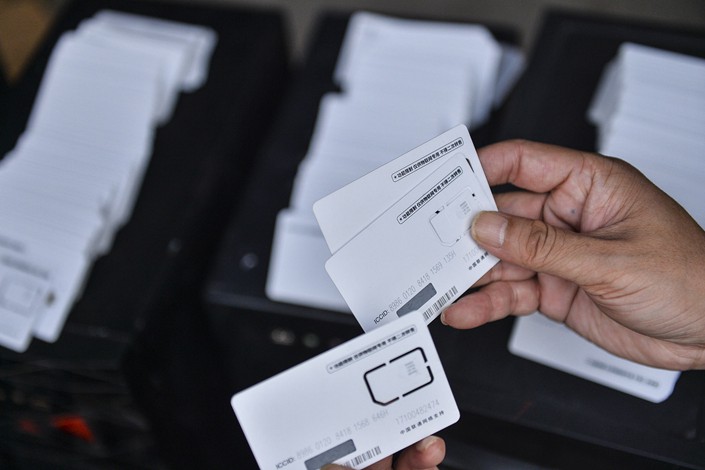 Guangdong police said Monday that they had banned 2,873 people from opening new mobile phone accounts for five years, including both scammers and those found to have sold or rented their mobile accounts to fraudsters.

Chinese police have deactivated mobile phone accounts connected to scams and banned thousands of people whose identities are linked to the accounts from opening new ones — even though some of them may not have been actively involved in fraud.

Guangdong province police said in a Monday statement they had banned 2,873 people from opening new mobile phone accounts within the next five years, including both scammers and those found to have sold or rented their mobile accounts to fraudsters. They did not say how many accounts were closed.

The people have been officially labeled as “untrustworthy,” the statement said, adding that they must apply to either a prefecture or provincial level police department if they want to be reconnected.

If they do so, they will only be allowed one mobile number or one landline, and will not be allowed to recover numbers linked to fraud.

The Guangdong police released partly redacted ID card numbers and names of the people involved in this ban, with one character deleted for privacy. By looking up the first two digits of the ID numbers, Caixin found that most of the people are from the neighboring provincial regions of Hunan, Guangdong and Guangxi. Under China’s real-name registration system, mobile phone accounts must be linked to an individual’s identity and documentation must be provided to open an account.

It’s not clear from the police statement whether or not all the people labeled as “untrustworthy” were aware their details were being used to open accounts for fraud purposes.

In their statement, Guangdong police urged people who have ever lost their phones, or noticed any abnormal activity regarding their telecom account, to consult their service provider to see if any accounts have been opened in their name that they don’t know about.

The province is joining the broader national efforts to clamp down on phone scams, online drug trafficking and gambling. As of the beginning of October, there were more than 155,000 telephone and internet fraud cases recorded across China, involving 145,000 arrests. Both figures have increased by two thirds year-on-year.

The central government rolled out in October a nationwide campaign to regulate the illegal circulation of mobile SIM cards.

The crackdown targets those who open multiple accounts at one time, people inside telecom companies who help set up the accounts, and those who persuade people — usually living in poverty or students at university — to open accounts in exchange for money. The investigation also looks into gangs who trade the accounts.

The authorities have intercepted over 51 million calls and 630 million texts linked to scams as of October this year, and stopped over 100 billion yuan ($15.3 billion) from going through to scammers.