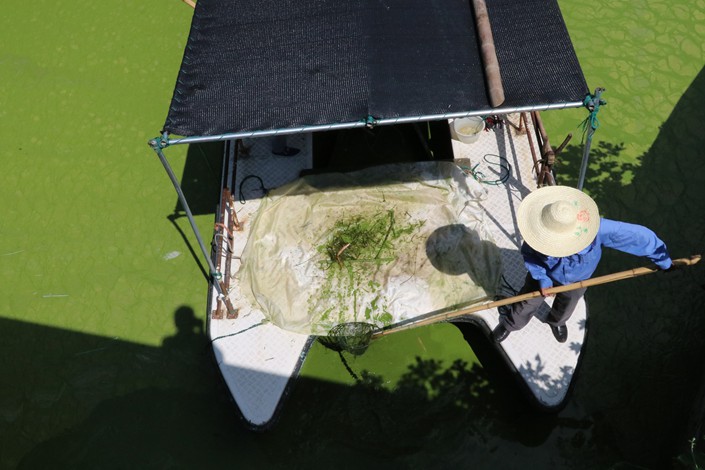 China is set to miss an exacting water quality target for a major lake that was previously the site of a devastating algae bloom, environment officials have said, though some have criticized the target as unrealistic.

Lake Tai, in East China’s Jiangsu province, made international headlines in 2007 when pollution from nearby factories caused plant-like algae to proliferate and prompted authorities to cut the water supply to millions of people.

The government later ordered the closure of many nearby factories and issued a plan aiming to slash levels of pollutants including phosphorus, a key nutrient for algae, in the lake by the end of 2020.

But with just days to go, phosphorus levels remain nearly 30% higher than the target, according to an official response by the national environment ministry to the head of its provincial bureau in Jiangsu.

“The Jiangsu provincial government has admitted that Lake Tai won’t meet (its phosphorus target) this year,” said a person with knowledge of the matter, who requested anonymity as they are not authorized to speak to the media.

By other metrics, Lake Tai’s water quality has improved since the bloom, with levels of permanganate, ammonia and nitrogen falling dramatically since 2007, according to a report in May by the Chinese business news outlet Yicai.

Research indicates the rebound was due to a combination of natural causes like changes in water flow patterns, and human causes like increased water use in nearby cities, large-scale diversion projects and a lack of coordination on pollution control measures between Jiangsu and neighboring Zhejiang province.

Lying in the Yangtze delta near the cities of Wuxi, Suzhou and Shanghai, Lake Tai, China’s third-largest freshwater lake, is an important area for industry, fishing and tourism.

The 2007 bloom of blue-green algae damaged ecosystems and forced authorities to take unprecedented action like cutting the water supply to some 2 million people in Wuxi and banning bottled water companies from raising their prices in the area.

The government eventually pledged to crack down on pollution in Lake Tai, one of a flurry of environmental rehabilitation projects carried out over the last decade. But interviews by Caixin hinted that this year’s phosphorus target is itself controversial.

“Historically, total phosphorus concentrations in Lake Tai may have been 0.05 (milligrams per liter) before industrialization and other human activity,” said the abovementioned source. “How can we realize (the target) when it’s been set so low?”