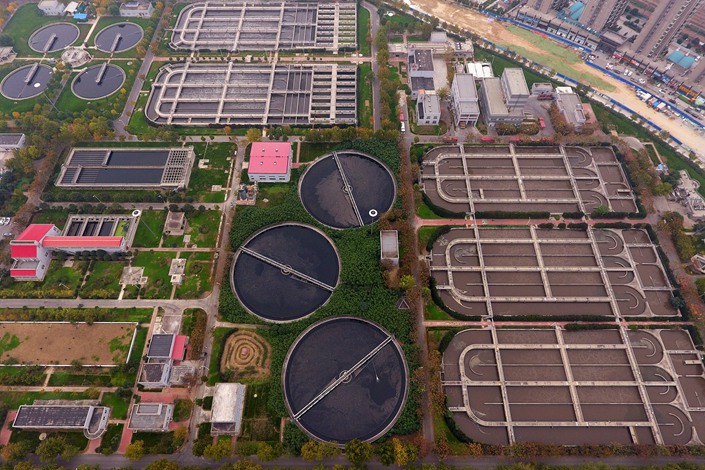 Local officials and sewage treatment experts in Henan reacted with dismay to a directive demanding they improve the quality of all surface water to near-drinkable levels by the end of the year.

They say the requirements fail to account for differences in how water is actually used and upend existing standards governing the levels of pollutants that sewage plants can release into urban waterways.

In recent months, environmental officials in Xinzheng, a city of 600,000 in southern Henan, required all sewage plants to ensure that outflows into local rivers meet the Grade 3 national standard for surface water, according to an article posted last month on a WeChat public account that covers the water treatment sector.

The standard represents the middle grade in a five-tier system in which Grade 1 is the highest. Grade 3 water is considered clean enough to be used for drinking, swimming and raising certain aquatic products, according to environmental guidelines.

The article questions the scheme’s feasibility and argues it ignores variations in water use in different parts of Xinzheng, a mostly industrial area.

The article’s argument chimed with the views of water quality experts. “Why set (the standard) at Grade 3 if you’re not using it for drinking or swimming?” said Wang Jiazhuo, the head of a municipal governance research team at the China Academy of Planning and Design in Beijing. “Is there something wrong with Grade 4 or Grade 5 water?”

Industry insiders said it was unusual to force sewage plants to abide by surface-water quality requirements instead of the separate — and laxer — standards they typically use to control contaminated sewage.

The latter is a three-tier system whose highest grade only requires a chemical oxygen demand — a purity indicator — of 50 milligrams per liter, a reading that would not even meet the lowest surface-water quality standard.

At an international forum for urban water development in November, Ren Nanqi, a member of the Chinese Academy of Engineering, said many people erroneously believe lax sewage processing standards are behind the appearance of deeply polluted “black and smelly” bodies of water, when in fact the key driver was the release of untreated sewage directly into waterways.

Inadequate drainage systems mean many Chinese cities capture and process only around half of the sewage they produce, Ren added.

Xinzheng’s scheme dovetails with a provincewide Henan policy announced in 2018 that requires six major cities, including the larger one that governs Xinzheng, to make sure all waterways, regardless of the water’s use, meet Grade 3 quality standards by the end of this year.

Ambitiously, the policy also calls for 70% of all surface water in the province to meet the same standard and eyes the complete elimination of black and smelly water bodies, both of which are significantly tougher than central government targets in the industrial province.

Critics have lambasted the targets as unrealistic and accused province-level officials of trying to curry political favor by surpassing their centrally mandated socioeconomic development goals.

Although it is technically possible to bring the waterways included in the plan up to Grade 3, “the real question is: Is it necessary to do so?” said a member of the municipal government of Zhengzhou, the provincial capital that governs Xinzheng, adding that local officials were struggling to implement the plans.

“Our own city leaders say it’s perfectly fine in practice to have Grade 4 water,” the person said. They requested anonymity as they are not authorized to speak to the media.

“I think Henan has acted too hastily in setting this target, given the province’s socioeconomic development level and insufficient natural resources,” said a water treatment expert who asked not to be named for the same reason.

Neither the Ministry of Ecology and Environment nor the provincial environment bureau responded to Caixin’s interview requests by the time of publication.

China is in the midst of a years-long campaign to clean up its waterways after decades of rapid economic growth left many of them polluted and unsafe. The government wants (link in Chinese) the number of black and smelly bodies of water to account for less than 10% of the urban total by the end of this year and fall to zero by 2030.

To meet those targets, officials have set more aggressive water quality standards and encouraged the public to send information on polluted waterways to the environment ministry via a mobile app, although research shows uptake and follow-ups have been limited.