In Depth: How Ethylene Glycol Led to the Yongcheng Coal Default

By Yu Ning and Denise Jia 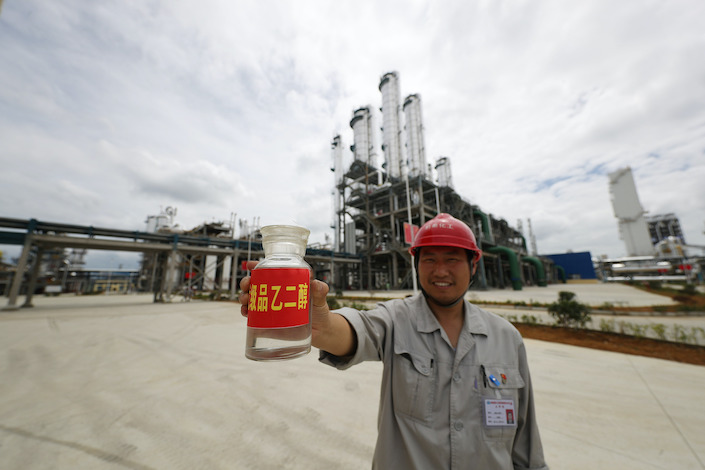 A worker holds a bottle of ethylene glycol made in a factory in Guizhou.

The surprise default that threw China’s corporate bond market into turmoil last month can be traced to massive, unprofitable investments a decade ago in ethylene glycol, a toxic but useful industrial chemical that Chinese factories consume in vast quantities.

The business case seemed sound in 2010 for the state-owned coal mining operations of central China’s Henan province to diversify into the product, which can use coal as a raw material. But the leader of Henan Energy and Chemical Industry Group. Co. Ltd. who initiated the investments was later convicted of corruption and imprisoned.

Then the economics of the business changed amid fluctuations in energy prices; competition intensified; and Henan Energy’s ethylene glycol business racked up huge losses year after year. That’s what ultimately dragged Henan Energy’s Yongcheng Coal and Electricity Holding Group Co. Ltd. into default. Yongcheng Coal was the most profitable unit of Henan Energy, the largest state-owned company by assets in Henan province.

But the case also showcases how questionable business dealings along the way, continued investments in money-losing operations and Henan Energy’s use of Yongcheng Coal as a piggy bank to cover massive deficits in other businesses created the conditions for the default. Yongcheng Coal’s failure to repay 1 billion yuan ($153 million) of bonds last month sent ripples through China’s debt market and forced a massive bailout and restructuring of Henan’s state-owned energy giant.

Ethylene glycol is used in many consumer products, including automotive antifreeze, ballpoint pens, paints, plastics, films and cosmetics. China consumes more than 50% of global ethylene glycol production, and it imports about a quarter of the world supply. Boosted by high demand and soaring ethylene glycol prices, many major Chinese coal companies rushed into the sector over the past decade. From nothing in 2010, China now has invested in 15 million tons of annual coal-based ethylene glycol capacity.

Henan Energy started investing in ethylene glycol under the leadership of Chen Xuefeng and Chen Xiangen, two former chairmen of the company. Chen Xuefeng was sentenced to life in prison in 2016 for bribery, embezzlement and abuse of power that caused losses of 224 million yuan ($34.3 million) to Henan Energy. His successor, Chen Xiangen, was investigated and charged with similar crimes, though he hasn’t been convicted.

Henan Energy entered the ethylene glycol business earlier than most of its peers. In 2010, the company’s predecessor decided to invest 10 billion yuan in five ethylene glycol projects, each with 200,000 tons of annual capacity. But because of technology obstacles, the first project didn’t start production until five years later. Its products had to be sold at discount because of subpar quality, an ethylene glycol dealer told Caixin.

When the technology finally matured and product quality improved, more competitors emerged, and ethylene glycol prices dropped. Now ethylene glycol sells for about 4,500 yuan a ton, the same as Henan Energy’s simple production cost, a sales employee at the company told Caixin. Adding in financial costs, equipment depreciation and labor, the company loses 2,000 yuan on every ton of ethylene glycol it sells, the employee said.

In addition to the five initial projects, Henan Energy in 2010 invested 6.3 billion yuan in an ethylene glycol manufacturing base in the coal-rich southwest province of Guizhou. That project took eight years to construct and started production only in 2018.

Now the company is just trying to hold on to its long-term orders, running at about 40% of ethylene glycol capacity with an average annual output of about 500,000 tons, the employee said.

The details of Henan Energy’s investment in these projects also raise questions. Henan Energy made the investments through Henan Yongjin Chemical, a 50-50 joint venture founded in 2010 with Inner Mongolia-based Tongliao Jinmei Chemical Co. Ltd. Through a series of capital reorganizations and equity investments, Henan Energy in 2019 bought a 20% stake in Tongliao Jinmei from some of Tongliao’s shareholders.

The stake was valued at 81 million yuan, 2.5 times higher than the shareholders paid just three months earlier. The deal increased the valuation of Tongliao Jinmei from 1.7 billion yuan to 4.1 billion yuan in just three months. What made the deal seem more dubious was that the seller companies canceled their business registration and dissolved soon after the deal was closed.

Over the years, even though Henan Energy didn’t generate profits from the ethylene glycol projects, it poured more money into the joint venture that eventually went to its partners. In 2010, even before the Yongjin Chemical factory was built, it signed a catalyst supply agreement with Tongliao Jinmei and made a 200 million yuan procurement payment in advance to Tongliao Jinmei, which supplied the catalyst at least five years later.

Hurt by the ever-growing black hole in its chemical segment, Henan Energy’s net loss has been expanding since 2017. The company reported a net profit of 38.8 million yuan in 2019, but it would have posted a loss if not the 995 million yuan of profit contributed by the Yongcheng unit.

When Yongcheng was unable to repay the 1 billion yuan of bonds last month, the market was shocked because the unit’s financial statement showed it had more than 32.8 billion yuan of cash and cash equivalents as of the end of September. But Henan Energy was regularly transferring funds from the unit’s accounts, a person close to Yongcheng disclosed. It was up to the parent company how the unit used its cash and whether it could repay debt, the person said.

Now as the Henan government moves to bail out Henan Energy, the first step is to divest the money-losing chemical business. The company said Nov. 2 that it will spin off its wholly owned chemical unit to three municipal governments in the province and Henan government-owned Haman Machinery Investment Group Co. Ltd. After the spinoff, Henan Energy is expected to generate annual profit of at least 3 billion yuan.