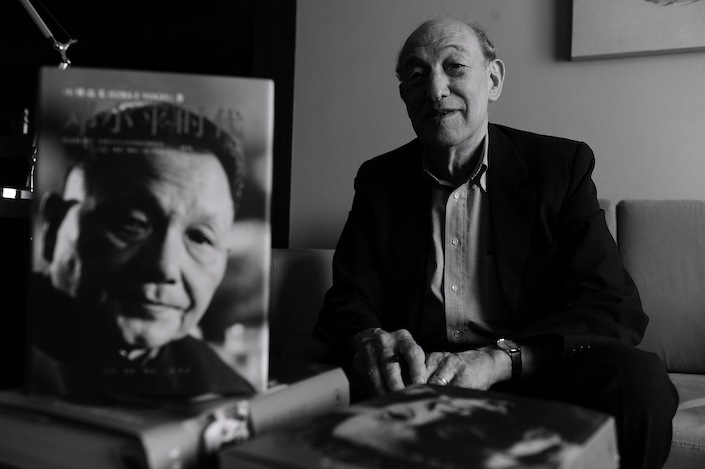 Global academics on East Asia are mourning one of the most prominent China experts in the U.S. and one of loudest voices objecting to U.S. President Donald Trump’s China policies, saying the world will be sorely miss his voice.

Ezra F. Vogel, 90, a Harvard professor who was a leading expert on East Asia, died Sunday in Cambridge, Massachusetts, of complications from surgery.

The passing of Vogel is “a huge blow to the field, especially at this critical time, because Ezra was a major supporter of the effort to inject greater sanity and balance into U.S. thinking about China,” tweeted Michael Swaine, director of the East Asia Program at Quincy Institute for Responsible Statecraft.

In an exclusive video interview in August with Caixin, Vogel predicted that a Joe Biden White House could ditch Trump’s hawkish U.S. posture toward China and adopt a “smarter and coordinated” approach in its strategic competition with Beijing.

“It’s crucial to rebuild mutual trust in the next two or three years to promote competition and cooperation,” he said. “If not, the world would be a dangerous place.”

Vogel insisted that the interview be conducted in Chinese and expressed regret that he couldn’t visit China in person amid the Covid-19 pandemic. He once lived in southern China’s Guangdong province for a year and has visited China every year since the late 1980s.

In the 1980s, he traveled in Shenzhen, Zhuhai and Shantou, witnessing the development of these special economic zones from scratch to modern cities.

He spent 10 years studying China’s former leader Deng Xiaoping and wrote an award-winning biography, Deng Xiaoping and the Transformation of China. Published in 2011, the more than 900-page book has provided a window for Westerners to gain a better understanding of modern China. Vogel told Caixin that he wrote the book mostly for American readers.

“Because I’m an American, I feel it’s my responsibility to help Americans to know more about East Asia,” he said. The professor said most American politicians don’t know much about China. Some politicians have been to China for only a week and have never studied the country, so they don’t have a deep understanding of China issues, he said.

In the midst of the U.S.-China trade war in July 2019, Vogel drafted and co-signed with about 100 American scholars and former diplomats an open letter published in The Washington Post, declaring to Trump and members of Congress that “China is not an enemy.”

The deterioration of the bilateral relationship is not in the interests of the U.S. or the rest of the world, and Trump’s attempt to “decouple China from the global economy” could damage America’s global reputation, the letter said.

A year after publication of the open letter, Vogel said competition between the world’s two largest economies is unavoidable.

“But [the two countries] should use peaceful and smart ways to compete, avoiding dangerous activities,” he said.

Vogel said he was working on a book about Hu Yaobang, the successor to Deng as the general secretary of the Chinese Communist Party.

“I think Hu was a lovely and very nice person,” he said. Writing about the former Chinese leader would help Americans know more about Chinese people and have a feeling that Chinese people could be lovely, he said. In a trip to China in late 2018, he had a six-hour conversation with Hu’s son Hu Deping.

Fluent in Chinese and Japanese, Vogel also published China and Japan: Facing History in 2019, which reviews the history of political and cultural ties between the two nations over 1,500 years. He told Caixin in an interview during his 2018 trip to China that he wrote the book not only for American readers but also to help China and Japan to improve their relationship.

“I study China as well as Japan,” the scholar said. “I have many Chinese friends and many Japanese friends. So I want to write a book about these two counties that can help them to improve their relations.”

Discussing the outlook for U.S.-Japan relations, Vogel said that after the Trump era, Japan has had some second thoughts about its alliance with the U.S.

“If what Trump proposes is a bad thing, will Japan do it?” he said. “I think the Japanese are thinking about whether they should have more of their own independent view.”

Born in the small town of Delaware, Ohio, Vogel was the son of Jewish immigrants. Explaining his Chinese name “Fu Gaoyi,” Vogel said he came up with the name with a Hong Kong research assistant in 1978.

Read more
My Father Saw the Good in Every Person and Every Nation, Vogel’s Son Writes

“Fu Gao sounds similar to my name Vogel, while Yi has two meanings—helping people and Israel, because I’m Jewish,” he said.

After graduating from Ohio Wesleyan in 1950 and serving two years in the U.S. Army, he studied sociology in the Department of Social Relations at Harvard, receiving his Ph.D. in 1958. He devoted two years to language study and field research in Japan in 1958-60, emerging as a specialist on Japan. He taught at Harvard since 1964 and succeeded John Fairbank to become the second director of Harvard’s East Asian Research Center in 1973. After his retirement from Harvard in 2000, he remained active in East Asian research and communications.