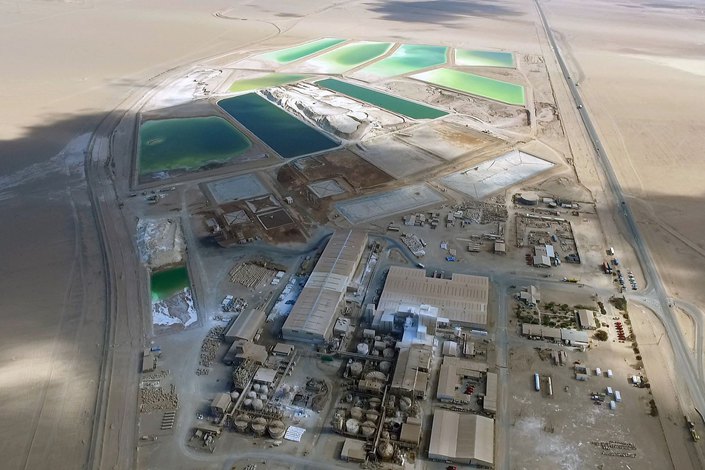 (Nikkei Asia) — The chairman of troubled Chinese miner Tianqi Lithium is to lend the company $117 million under a condition of the company’s deal with Australian miner IGO Ltd.

Tianqi Lithium came close to defaulting last month on $1.88 billion in loans taken out two years ago to finance the purchase of a large stake in Chilean lithium miner SQM. IGO helped Tianqi Lithium out of the debt squeeze by agreeing to buy nearly half of Tianqi Lithium’s interest in a joint venture that controls Greenbushes, the world’s largest lithium mine, and a nearby processing facility in Western Australia state.

Tianqi Lithium, in a filing to the Shenzhen Stock Exchange, where it is listed, said that Chairman Jiang Weiping’s investment vehicle will extend a loan of $117 million to the company as it struggles to repay its heavy debt obligations created by a series of acquisitions.

Investors welcomed the news, with analysts viewing the development as an additional personal guarantee by the company’s owner. Tianqi Lithium’s shares jumped 10%, the Shenzhen exchange’s daily trading ceiling, in Tuesday’s morning session and eventually closed up 3.1% from Monday.

Dennis Ip, an analyst at Daiwa Capital Markets in Hong Kong, told Nikkei Asia that it was “interesting to see [the] market reacting so positively” to Tuesday’s announcement. The cash contribution was “to ensure Mr. Jiang having skin in the game” for the restructuring deal with IGO.

The chairman’s personal commitment was necessary so that the “interests of IGO, Tianqi Lithium and Mr. Jiang himself can be better aligned, so to mitigate any potential principal-agent problem,” he said.

Ip noted that Jiang and Chengdu Tianqi Industry Group, his investment vehicle and the leading shareholder of Tianqi Lithium, had been providing support for the listed company for at least the past few years.

Tianqi Lithium reached a deal this month to sell almost half of its interest in the investment vehicle holding its stake in the mine at Greenbushes.

In exchange for the Australian company paying $1.4 billion, the agreement stipulated that Jiang provide a $117 million five-year unsecured loan, either by himself or from one of the companies that he controls other than Tianqi Lithium. The interest rate was set at no more than 5%, which compares with the official prime lending rate of 4.65%, set by the People’s Bank of China on Monday for loans of at least five years. Jiang is required to extend the loan by Feb 1.

Tianqi Lithium’s board on Monday approved the acceptance of cash from Chengdu Tianqi, its parent company. Jiang owns 88.6% of Chengdu Tianqi, while his daughter Jiang Anqi holds 10%.

Tianqi Lithium’s annual report, published in April, indicated that Jiang personally guaranteed a U.S.-dollar-denominated loan of $3.5 billion from a syndicate led by Chinese state-owned Citic Bank in Nov. 2018. Separately, Chengdu Tianqi has provided a guarantee of a 300-million-yuan ($45.8 million) loan for the listed entity.

Jiang’s family has committed its personal fortune into Tianqi Lithium as well. In a new-share placement completed in January, Zhang Jing and Li Silong, Jiang’s wife and son-in-law, bought a combined 41% of the total new issuance worth 1.2 billion yuan in cash, according to the filing.

Chengdu Tianqi has been selling the listed company’s shares since July. So far, it has disposed of roughly 80 million shares, bringing its holdings down to 30.6% as of Monday compared with 36.04% previously.

Tianqi Lithium was a local state-owned enterprise when it began operations as the Shehong County Lithium Salt Factory in 1992, but it later was bought out by private investors, led by Jiang, in 2004 and changed its name. In an interview with the Sichuan Daily newspaper in September 2019, Jiang spoke of how he restructured a dilapidated local SOE, which was insolvent at the time, into a global player after a series of acquisitions abroad.

Jiang was selected as a “people’s representative” to the National People’s Congress in 2018, an indication that he was considered a rising private capitalist, trusted by the Communist Party. In the interview, Jiang said that Tianqi Lithium’s financial situation was under control, with repayment plans set, while also pledging to bring down its overall debt to a “reasonable level” within 12 months.

Instead, control of one of the company’s most important assets was diluted in order to meet various requirements by lenders.

Tianqi’s stake in the Greenbushes mine, held through Tianqi Lithium Energy Australia, will fall to 26.01% from 51%, in order to pay off the $1.88 billion debt — which was part of the $3.5 billion borrowed from the Citic-led syndicate for the purchase of a minority stake in SQM for $4.06 billion two years ago.

Albemarle, an American chemical company, owns the remaining 49% of Tianqi Lithium Energy Australia. The U.S. company said in a statement two weeks ago that the deal with IGO “appears to be structured in a way that would not trigger Albemarle’s right of first refusal,” but added that “we are still evaluating and consulting our advisers to be certain.”

Moody’s Investors Service, which rates Tianqi Lithium, said the deal was “credit positive” but was not enough to immediately change its speculative “Caa2” rating. Gerwin Ho, its credit analyst, said there were “uncertainties relating to the various conditions and concerns that need to be resolved before the completion of the proposed financing and loan amendment plans.”

The loan agreement with the bank syndicate, which could be extended, has yet to be finalized. The deadline for negotiations with the banks is Dec 28.