By Jia Tianqiong and Shen Lu 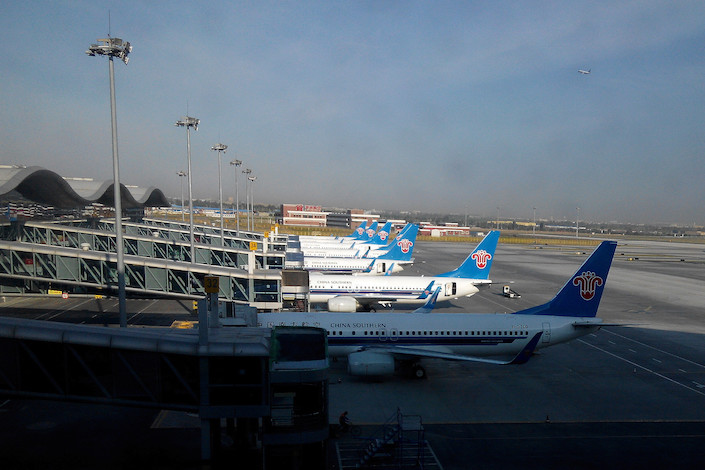 China Southern is the first Chinese airlines to halt flights to the U.K.

China Southern Airlines, one of the country’s biggest carriers, suspended direct flights between China and Britain in response to the new variant of the coronavirus that is spreading quickly in the European country.

More than 40 countries and regions have imposed temporary travel bans on Britain after an even more highly infectious new coronavirus strain was identified in the country in mid-December.

Chinese authorities have yet to announce any travel restrictions on the U.K., although the special administrative region of Hong Kong adopted a temporary travel ban. In a regular press conference Monday, China’s Foreign Ministry spokesperson Wang Wenbin said China took note of the latest development in the U.K. and would make decisions accordingly.

China Southern is the first Chinese airlines to halt flights to the U.K. The company said Wednesday that it would cancel the weekly direct flight from Guangzhou to London for three weeks starting Dec. 24. Rivals Air China and China Eastern Airlines both said they were studying possible measures for flights between China and the U.K.

Scientists in the U.K. described the newly identified variant of the coronavirus to be more contagious than and genetically distinct from more established variants. The new discovery prompted Prime Minister Boris Johnson to order a full lockdown of London and the southeastern and eastern parts of the country, affecting around 21 million residents.

The Chinese embassy in the U.K. said Wednesday that it decided to close down two visa centers in London and Manchester in response to the lockdown measures.

There are currently eight weekly direct flights between China and the U.K. in operation. British Airways and Virgin Atlantic each operate two flights a week, while Air China, China Eastern, China Southern and Capital Airlines each flies once a week.

Trips between China and Britain via a third country will also be affected by spreading travel bans. Sichuan Airlines said Tuesday that it would suspend China-bound flights from the U.K. transiting via third countries starting at midnight Wednesday until further notice.

Budget airline Juneyao Air’s China-bound flights from Britain have been affected by a travel ban imposed by the Finland government, one employee said. Juneyao operates two routes linking Britain and China via Helsinki, sharing the code with Finnair.

Travel between Britain and China has been difficult amid a dramatic reduction of direct flights for pandemic control, and the latest development will make it even harder. A Chinese student who returned from the U.K recently said that with limited options for direct flights, Helsinki was a popular transit choice for China-bound travelers from the U.K. as Helsinki-Vantaa Airport can provide timely virus tests meeting the requirements of Chinese customs.

Since November, China required incoming passengers to submit negative results of both nucleic acid and IgM antibody tests within 48 hours before boarding a flight. If travelers have a layover in a third country, they must also obtain proof of the same tests from the transit country, making it more challenging for travelers entering the country via transfers.