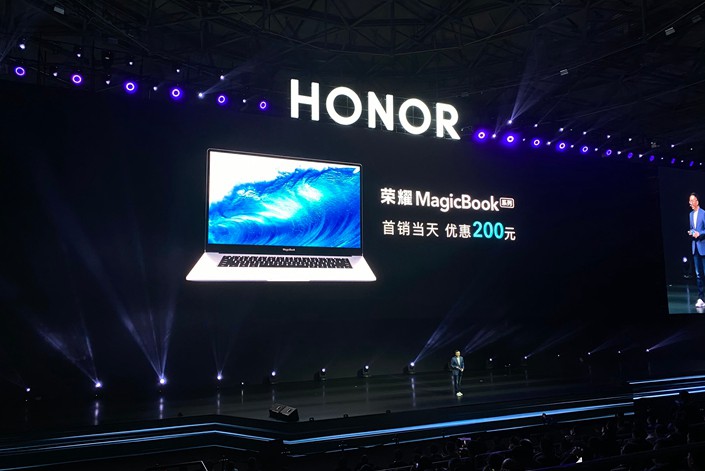 Electronics brand Honor has agreed to install Microsoft Corp.’s Windows 10 operating system in its laptops as it seeks to reestablish ties to American suppliers a month after getting the green light to do so following its sale by embattled tech giant Huawei Technologies Co. Ltd.

Under the agreement, Windows 10 will be the default operating system in Honor’s laptops that are manufactured and sold both within China and abroad, the company said in a statement Thursday. The tech company will launch the latest version of its flagship laptop, the MagicBook Pro, which is powered by Intel’s Core i5 processors, in overseas markets in January, according to the statement. A new version of the MagicBook laptop will also be ready for launch in the China market at the same time, it said.

“We are happy about this deal that will see us team up with Microsoft world-wide,” said Honor CEO Zhao Ming. “Honor is open to working with business partners across the global industry chain.”

The tie-up is Honor’s first partnership with a foreign company after Huawei announced in November that it was selling the business for an undisclosed amount to Shenzhen Zhixin New Information Technology Co. Ltd., a consortium of partners and companies affiliated with Huawei’s hometown government of Shenzhen. It also comes after Christano Amon, president of U.S. semiconductor giant Qualcomm Inc., said earlier this month that his company had initiated talks to license its technology to Honor.

The Trump administration has long deemed Huawei a threat to national security, and restrictions, which were ratcheted up over the summer, require chipmakers to obtain a U.S. government license before selling products made using American technology to Huawei.

Qualcomm’s publicly announced talks with Honor suggests it believes Honor is an independent company and isn’t subjected to the restrictions imposed on Huawei. But it remains uncertain whether the U.S. government will share the view that Honor operates as a separate entity from Huawei. Qualcomm has obtained authorization from the U.S. government to export and sell 4G products to Huawei, but no company has been granted approval to supply it with the more advanced 5G technologies.

Theoretically, Honor should not be subject to any U.S. restrictions after it spins off from Huawei, but if American authorities still target the company, it may face difficulties surviving due to an inadequate supply chain, Jia Mo, telecom analyst at market research firm Canalys, told Caixin.

The rules have effectively cut off Huawei’s access to chipsets as it is incapable of manufacturing its own. It had previously used contract chipmakers in Taiwan to manufacture its chips, but those contractors use American technology.

The tech giant has said the divestment of Honor was due to “persistent unavailability of technical elements needed for production” and “tremendous pressure on consumer businesses.” After the sale, Ren Zhengfei, Huawei founder and CEO, said at an event last month that Honor should cooperate with partners in the U.S. and aim to challenge its former parent company in business.