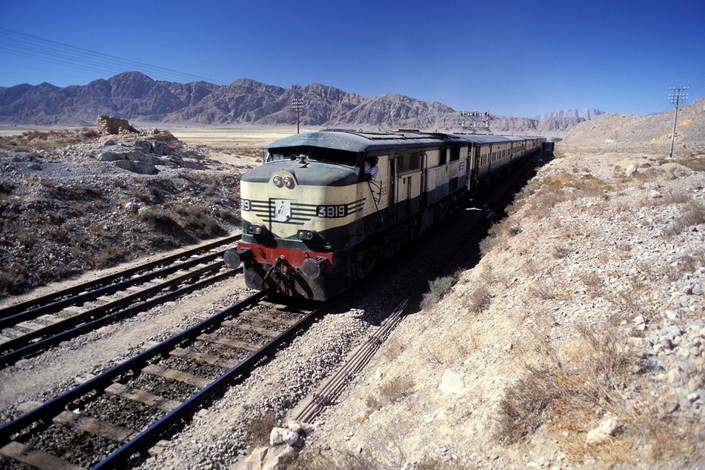 (Nikkei Asia) — The governments of Turkey, Iran and Pakistan will revive a transnational rail service linking Istanbul, Tehran and Islamabad in 2021. The ITI transnational railroad is expected to enhance connectivity with China’s Belt and Road Initiative (BRI) by providing a rail connection between China and Turkey, Nikkei Asia has learned.

The roots of this grand project can be found in the ITI Container Train Service launched in 2009 under the umbrella of the Economic Cooperation Organization. ECO is a 10-member political and economic intergovernmental organization founded in 1985 by Iran, Pakistan and Turkey.

The container service only got as far as test runs, however, and was never fully operational. Even so, the three countries always planned to follow up the initial freight trains with passenger services.

The immense route stretches 6,540 kilometers — more than a sixth of the world’s circumference. Some 1,950 km of track is in Turkey, 2,600 km in Iran, and another 1,990 km in Pakistan. The journey from Istanbul to Islamabad will take 10 days — much faster than the 21 days by sea between Turkey and Pakistan.

Speaking on condition of strict anonymity, a Pakistani government official told Nikkei that the ITI railroad will connect to China’s Xinjiang Uyghur autonomous region through Pakistan’s ML-1 railway line. The ML-1 project is worth $6.8 billion, and is the largest component in the China-Pakistan Economic Corridor (CPEC), the flagship Pakistani component of China’s BRI. The link should be made in 2026 when ML-1 is due for completion.

Observers see the ITI railroad as a BRI extension. Lukasz Przybyszewski, a West Asia analyst for the Asia Research Centre at Warsaw’s War Studies Academy, believes that Beijing regards Iranian transport infrastructure in particular — and ECO’s more generally — as parts of BRI. “In times of crisis and war, such alternative land trade routes are very valuable and profitable,” Przybyszewski told Nikkei. He said Beijing assumes these countries will be active BRI partners in need of precisely tailored investments.

The ITI railroad will be the first regular rail service between China and Turkey, but a more circuitous possibility does exist. On Dec. 19, a train reached Xi’an after traveling from Turkey through Georgia, Azerbaijan, crossing the Caspian Sea by ferry, and Kazakhstan. Xi’an in Shaanxi province northeast of Xinjiang is the eastern end of the Silk Road that connected ancient China to the Mediterranean.

This route follows the Trans Caspian East-West Middle Corridor via the Baku-Tbilisi-Kars railway. Experts believe China can develop both routes.

James M. Dorsey, a senior fellow at the S. Rajaratnam School of International Studies in Singapore, told Nikkei that Beijing’s decisions on the relative merits of the Istanbul-Xi’an and ITI routes will ultimately reflect its economic and geopolitical ambitions. “From Beijing’s standpoint, Turkey is a crucial trade hub, and in the long run it will not hurt to have multiple rail routes connecting China with Turkey,” Dorsey told Nikkei.

Dorsey said that Turkey is positioning itself as a key Eurasian transportation hub, and to that end it makes perfect sense for Turkey to develop multiple rail links to South Asia and China. “Ankara is filling the vacuum as a leading regional player after the U.S. government conceded geopolitical space in the region under the Trump administration,” he said.

Experts also believe the ITI railroad will help Iran move around U.S. sanctions. “For Tehran, this is an attractive alternative trade route because the ECO countries trade in local currencies,” said Przybyszewski.

The seven member countries that joined ECO in 1992 are Azerbaijan, Afghanistan, Kazakhstan, Kyrgzstan, Uzbekistan, Tajikistan and Turkmenistan. “It is practically impossible to isolate and stop Iran from trading with its neighbors,” said Przybyszewski. He said infrastructure projects such as the ITI railroad will stimulate the Iranian economy, and new railway connections will offer greater flexibility going forward.

Last week, however, China asked for additional guarantees from Pakistan, and refused to give the complete concessional loan Islamabad wanted for the $6.8 billion ML-1 project. That raises the question of how Pakistan will fund its railway network upgrade in massive Balochistan province, where the tracks are over a century old and often submerged in sand dunes. Unlike the tracks in Iran and Turkey, Pakistan’s lines cannot carry heavy freight trains at present.

Experts believe that Pakistan will have to look for funding outside the BRI framework. “This project will probably not receive financial support from China, because it wouldn’t be in the interest of Beijing,” said Przybyszewski. He said China will lend political support to the ITI railroad, because it complements the BRI, but it still expects Iran, Pakistan and Turkey to bear costs and share risks if they wish to benefit from the trade and investment dividends a successful ITI railroad is expected to yield.