By Huang Yuxin and Cora Zhu 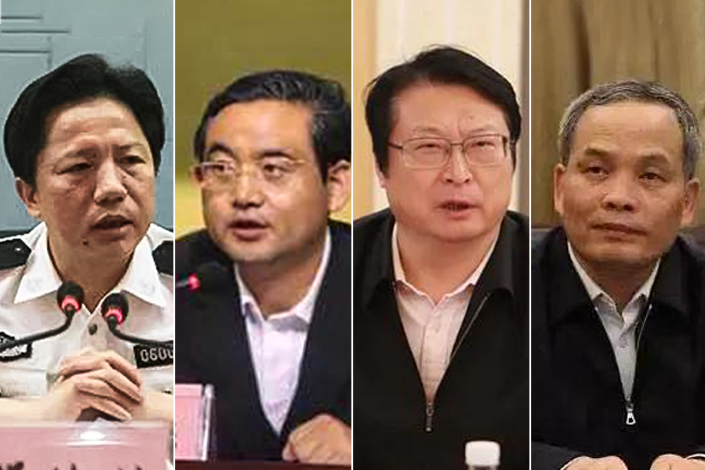 Four former senior officials have been punished and had their cases transferred to prosecutors after being investigated by the Chinese communist party’s internal disciplinary watchdog, the authority announced Monday.

The Central Commission for Discipline Inspection said on its website that Deng Huilin (邓恢林), Wen Guodong (文国栋), Luo Jiamang (骆家駹) and Hu Wenming (胡问鸣) have been expelled from the Communist Party and the first three have been fired for serious violations of party discipline and law.

Their illegal gains have also been confiscated, the commission said.

The punishment came ahead of the 19th Central Commission for Discipline Inspection’s fifth plenary session, which is scheduled to take place from Jan. 22 to Jan. 24.

Deng Huilin, the former police chief and deputy mayor of Chongqing, was the first powerful “tiger” snared in China’s southwestern megacity by the nationwide anti-corruption campaign by President Xi Jinping.

He was denounced for forming cliques in the party to attain political capital and engaging in superstitious activities. He also went to banquets that might affect the impartial execution of his official duties, interfered in promotions, sought benefits for relatives’ companies and accepted bribes, the watchdog said in the statement. He was placed under investigation in June last year.

Wen Guodong, the former deputy governor of Qinghai, was also accused of losing his faith and being disloyal to the party, putting no emphasis on the party’s major decisions and plans. He took advantage of the coal mines under his charge and traded power with illegal private companies for financial gain, helping to maintain the long-standing problem of illegal coal mining in Qinghai, the graft-buster said. He was placed under supervisory investigation in September last year.

For Luo Jiamang, the former chief accountant of COFCO Corp., China’s largest food group, the commission said he lost his faith and interfered with the inspection work. He was also denounced for acceptance of banquets and gifts, among other misconduct. He was placed under investigation in August last year.

Hu Wenming, the former Communist Party chief and chairman of China Shipbuilding Industry Corp., was accused of abuse of power and accepting bribes. The commission said he “illegally played golf, visited private clubs and accepted banquets that might affect the impartial execution of his official duties.”

He also “accepted gifts and gratuities while arranging for subordinate units to pay expenses that should be paid by him personally.” He was placed under investigation in May last year.