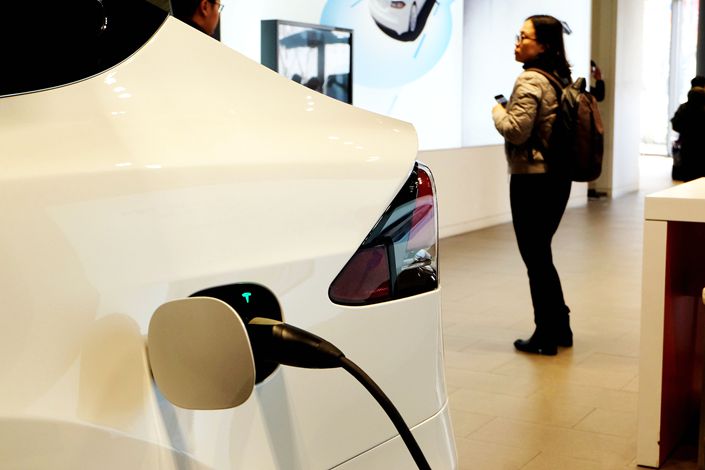 A car is charged at a Tesla showroom in Shanghai.

China’s electric car manufacturers appear set to install a cheaper alternative to the popular ternary lithium battery in even more of their vehicles this year as state subsidies granted to the sector are slashed further, driving up costs.

More and more new-energy vehicles (NEVs) made in China, including those built by Shenzhen-based BYD Co. Ltd., are being equipped with lithium iron phosphate batteries, as they can be made without the need for costly cobalt, one of the trio of metal oxides used to manufacture ternary lithium batteries, said analysts and car industry insiders.

The Ministry of Finance slashed subsidies for NEVs this year by 20% from last year’s level, forcing carmakers to find ways to offset high costs and make their vehicles competitive against their fuel-guzzling rivals. The cost of lithium iron phosphate batteries is 15% lower than ternary batteries, an executive at a large automotive company told Caixin, asking not to be identified so they could speak candidly.

Chinese NEV-makers aren’t alone in making the switch. American electric vehicle giant Tesla Inc. last October swapped the battery in its Shanghai-made Model 3 to the cheaper variant, bringing down prices by 14.4% to 249,900 yuan ($38,684). A report released by BOCI International (China) Ltd. on Tuesday indicates prices of Tesla’s Model Y in China may also drop as the manufacturer could also adopt the cheaper battery for this new module.

In the first 11 months of 2020, a total of 65% of NEVs in China had ternary lithium batteries installed, a drop of 3 percentage points from the same period last year, while the lithium iron phosphate batteries were installed in 34.5% of vehicles, a rise of 5 percentage points, according to data from a think tank affiliated with China Automotive Battery Research Institute Co., Ltd.

The declining subsidies are likely to further dampen manufacturers’ willingness to install the more expensive batteries. Currently, NEVs that can run at least 43 kilometers (26.7 miles) on a single charge are eligible to receive a subsidy, according to a statement released by Ministry of Finance last Thursday.

To tackle this drawback, China’s largest battery manufacturer, Contemporary Amperex Technology Co, Ltd., has been seeking to develop products without metals while Tesla is making batteries itself in order to save power and extend range.