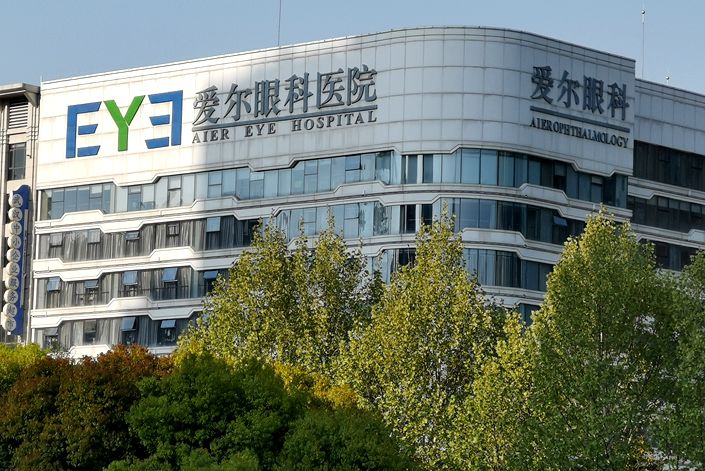 A prominent doctor who previously helped sound the alarm about China’s Covid-19 outbreak has publicly accused one of the country’s largest private hospital chains of serious medical malpractice and fraud, wiping 27.5 billion yuan ($4.26 billion) off the company’s market cap.

Shares in Shenzhen-listed Aier Eye Hospital Group Co. Ltd. were down 8.91% at close on Monday, the first trading day of the new year, after Ai Fen, the head of the emergency department at the Central Hospital of Wuhan, claimed that the company botched her treatment for vision problems, leaving her nearly blind in one eye.

Ai rose to eminence last year as part of a group of doctors in Wuhan who brought the central city’s then-unknown Covid-19 outbreak to international attention. Three doctors at the hospital where she works later died of the disease, including whistleblower Li Wenliang, whose death sparked a national outcry.

The health commission of Hubei province, of which Wuhan is the capital, has formed an expert group to investigate Ai’s claims, Caixin understands. Aier said Monday that it had launched an internal probe, but disputed some of the allegations.

In a lengthy post (link in Chinese) on her Weibo social media account on Dec. 30, Ai wrote: “While I was lucky enough to avoid contracting (Covid-19) last year, I was unable to avoid developing a detached retina the day after my 46th birthday, leaving me almost blind in my right eye.”

In subsequent posts (link in Chinese) over the following days, Ai, who has more than 2 million followers on Weibo, said she visited an Aier branch in Wuhan in May after the vision in her right eye markedly deteriorated. She was diagnosed with severe nearsightedness and cataracts, and underwent an operation to implant an artificial lens for a total cost of 29,000 yuan.

Although her vision initially improved after the surgery, she experienced a detached retina in the same eye five months later, leaving it nearly sightless, she said.

Ai claims that the hospital botched consultations, gave her fraudulent documents prior to surgery, failed to note postoperative vision problems and ordered her to seek treatment for her retinal detachment at another hospital.

Aier has rejected some of the claims, saying in a Monday statement that there was “no direct link” between Ai’s surgery and her retinal detachment.

However, her treatment had revealed “problems with the inadequate execution of medical management and standards, as well as with a weak sense of responsibility,” the company said.

According to the statement, Aier failed to adequately follow up with Ai in the weeks and months after her surgery and did not keep robust records of her condition. Additionally, the doctor in charge of her treatment had failed to report the incident in line with hospital rules.

In a Weibo post on Monday, Ai wrote that the vice director of Aier’s Wuhan hospital had apologized for the incident in a phone call and said her treatment was insufficiently thorough.

In another post the same day, she wrote that Aier’s statement “avoids the important issues, misleads the public, throws management into chaos and shirks responsibility.”

Ai’s claims rocked Aier’s share price, with the company’s Shenzhen stock briefly plunging by more than 9% during Monday trading before ending down 8.91% at 68.22 yuan. It sustained a modest rally through Wednesday and closed at 71.49 yuan, a 4.5% drop from its record end-of-day high on the last day of last year.

Private eye care has surged in China over the last decade as people have increasingly shunned public hospitals for routine ophthalmic complaints like cataracts.

Aier is one of the sector’s biggest success stories. Since its domestic stock market debut in 2009, the company’s market value has risen more than 40-fold, making it one of the country’s leading private medical groups. Its share price rose by 147% last year.

The firm operates more than 500 branches on the Chinese mainland, where it logs more than 10 million outpatient visits per year, according to its official website. It also has seven branches in Hong Kong and dozens more across Europe, Southeast Asia and the United States.