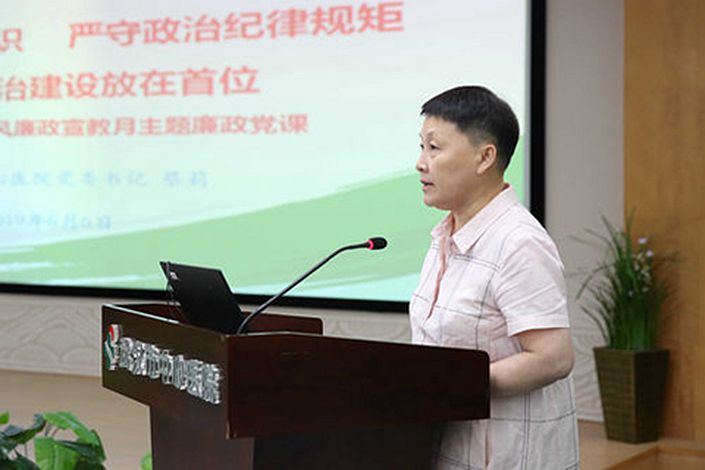 The Central Hospital of Wuhan, which suffered more medical staff deaths than any other hospital in the city at the epicenter of China’s coronavirus outbreak, announced at a staff meeting Thursday that Cai Li, the hospital’s party chief, has been removed, Caixin has learned.

At the meeting, the hospital did not explain why Cai was removed. The hospital was hit harder by Covid-19 than any other in Wuhan during the city’s outbreak. More than 285 of its 4,300 medical staff had been diagnosed with Covid-19 as of March 29, the highest rate of infection of any local hospital, according to a medical aid fund established by ByteDance Ltd., the tech company behind the popular TikTok app.

The hospital replaced Cai with Wang Weihua, who was promoted in April to deputy director of the Wuhan Municipal Health Commission after serving as party secretary at Wuhan Pulmonary Hospital. Wang devoted herself to working on the front lines of the fight against the epidemic and was in charge of medical preparation for Wuhan’s Huoshenshan makeshift hospital in late January, according to an appointment letter.

Multiple doctors at the hospital, who spoke with Caixin on the condition of anonymity due to the sensitivity of the issue, blamed Cai and other members of the hospital’s leadership, who are not medical professionals, for the unnecessary deaths of their colleagues.

Cai, 58, who was previously the head of human resources at the city’s health commission, did not sufficiently understand infectious diseases and failed to take measures to prevent infections at the hospital, they said.

Information about the novel coronavirus had been closely held secret among a small group of medical workers, researchers and officials, until several doctors including the late Li Wenliang sounded the alarm to the public.

On Dec. 30, Ai Fen, head of the emergency department at Central Hospital, sent a photo of a lab report of a Covid-19 patient to other doctors on WeChat. Li Wenliang and a few others then shared the report privately as a warning to friends and colleagues to take protective measures.

However, the messages soon ended up circulating widely online, sparking a public uproar and demands for more information. Li and two other doctors at Central Hospital were reprimanded (link in Chinese) by local police for “spreading rumors.” Ai was also chastised by hospital supervisors for “gossip mongering and causing trouble without principle or discipline.”

On Jan. 3, Central Hospital asked every department to keep an eye on its staff and require them not to disclose “confidential information” to the public, according to a recording of the meeting obtained by Caixin. Workers at the hospital were told not to talk about the novel coronavirus, nor send text messages, photos or anything else that might leave a paper trail.

A department head at Central Hospital told Caixin that stifling true information had “left hundreds of doctors and nurses in the dark, doing all they could to treat patients without knowing about the epidemic.” “Even when they fell ill, they could not report it. They could not alert their colleagues and the public in time despite their sacrifice. This is the most painful loss and lesson.”

In a series of previous interviews with Caixin, doctors at the hospital discussed several key factors behind their plight. First, as one of the closest hospitals to the Huanan Seafood Wholesale Market where most people infected were first exposed, Central Hospital treated the most patients in the early stages of the outbreak, doctors said. Second, first-generation virus infections can be deadlier, they said, and Li and Mei could have been infected by the same patient.

Moreover, in early January, fever patients had overwhelmed related clinics at Central Hospital. Another Covid-19 designated hospital only took in patients whose contact history was linked to the seafood market. The overflow had no choice but to seek medical attention at other departments, where staff were not contagious disease specialists and were at greater risk of infection, doctors said.

The doctors at Central Hospital were the first to send patients’ swabs to labs for analysis and report the Covid-19 outbreak to district-level health authorities late last year. But interference from Wuhan’s municipal health authority made it difficult for the hospital to report cases, especially during the provincial “Two Sessions” legislative meetings in early January, Caixin reported previously, citing a Central Hospital internal document.