By Wen Simin and Anniek Bao 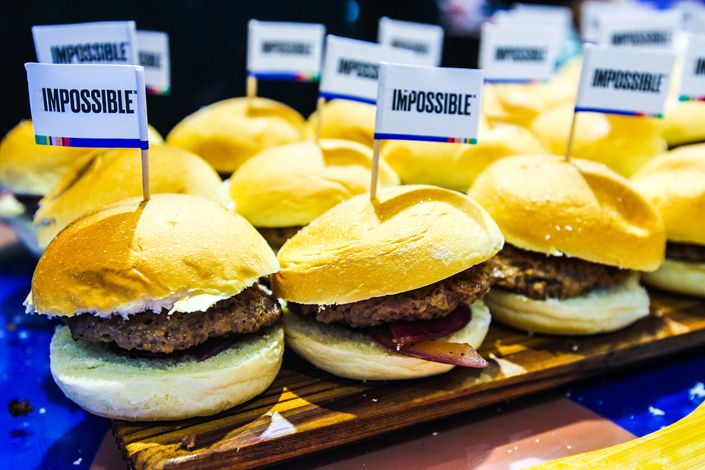 Impossible Foods' meatless burger patties and sausages are made using heme, which is derived from genetically modified yeast and gives the products their meat-like flavor, but requires regulatory approval in China.

U.S. artificial-meat maker Impossible Foods will slash the wholesale price of its products in global markets including Hong Kong and Macao as it seeks to boost the competitiveness of its plant-based burgers and sausages against those made from animals.

The firm will first cut its wholesale prices in the U.S. by an average of 15% before rolling out “double-digit international price cuts” later this month in other markets, which in addition to China’s special administrative regions, will also include Canada and Singapore, it said in a statement posted on its website Wednesday. The company also said this will not be the last round of price cuts.

“Our stated goal since Impossible Foods’ founding has always been to drive down prices through economies of scale, reach price parity and then undercut the price of conventional ground beef from cows,” said Impossible Foods CEO and founder Patrick O. Brown. The statement did not provide specific details of the cuts for distributors outside the U.S., saying only the reductions would vary between regions.

China, which according to market data firm Statista accounts for 27% of global meat consumption, has remained the holy grail of meat-alternative makers, after the coronavirus pandemic hit restaurant sales in the U.S. Products of American competitor Beyond Meat are already sold at some of China’s most popular fast-food chains, including Starbucks, KFC, Taco Bell and Pizza Hut. Other players such as Sweden’s oat-milk producer Oatly AB and the U.S.-based Eat Just Inc., a vegan egg company, also have a Chinese presence.

However, the privately-held Impossible Foods is yet to get approval to sell its products in the Chinese mainland, while in Hong Kong, it sells a 340-gram (12 ounce) pack of imitation beef for HK$89.9 ($11.60), twice as much as the real thing. In the U.S., its wholesale price is around $7.80 per pound, also twice the price of the real thing, according to a Jan. 1 report from the U.S. Department of Agriculture.

But high costs could be just one more hurdle in the Chinese mainland market for the company, even after the outbreak of African swine fever drove up the price of pork and primed consumers for alternatives.

Regardless of these issues, the company is ready for the foray into the mainland market, Brown told Caixin in September last year, even as Chinese regulators continue to evaluate the products and establish rules for the sector.

The company’s meatless burger patties and sausages are made using heme, which is derived from genetically modified yeast and gives the products their meat-like flavor, but requires regulatory approval in China.

Impossible Foods said in the statement that its production in the U.S. has increased sixfold since 2019 and has seen it fill holes left by the closure of several domestic major meat wholesalers and manufacturers that found that some workers had been infected with Covid-19.

And though many are salivating over the potential size of the Chinese artificial meat market, producers will still need to win over a populace that surveys have shown are generally skeptical of genetically modified foods.

The company told Caixin in September it hopes to build a complete supply-chain ecosystem in the mainland in the future, with ingredients locally sourced and production lines in the region.

Earlier last year, Beyond Meat announced that it would build two manufacturing facilities in Jiaxing, East China’s Zhejiang province, which are set to begin full production of plant-based beef, pork and chicken products for the domestic market by early 2021.

Swiss company Nestle SA has opened a factory in the northern city of Tianjin where it makes products such as faux burger patties and pork mince for restaurants and other food service providers. It has pushed to market the range of plant-based meat alternatives in China under its Harvest Gourmet brand.