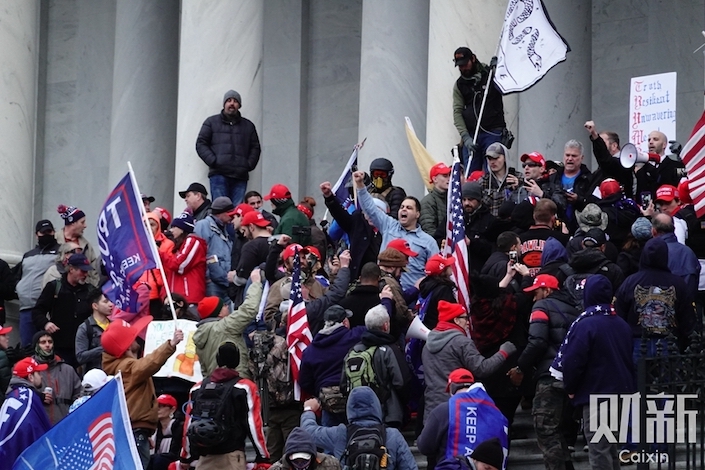 Demonstrators gather outside the U.S. Capitol building during a protest in Washington, D.C., on Wednesday, Jan. 6, 2021. Photo: Du Zhihang/Caixin

(Washington D.C.) — From a window in my home in Arlington County, Virginia, just across the river from Washington, D.C., I can see the three major landmarks of the American capital — the Lincoln Memorial, the Washington Monument and the U.S. Capitol.

Of the three, the Capitol is the gentlest-looking. At night, the Lincoln Memorial and the Washington Monument are illuminated starkly from the outside by spotlights. The Capitol, on the other hand, glows more softly from within as orange lights show through windows in the giant dome.

On weekdays when members of the U.S. Congress are in session, a small, temple-like structure at the top of the dome called the "Tholos" is lit. As night falls, the lights from the dome grow clearer, flickering through the steam rising off the surface of the Potomac River, rendering a sense of peacefulness.

But on Jan. 6, as Congress was supposed to officially recognize the U.S. president-elect, the Capitol's previous tranquility was shattered.

In the morning, a large number of extremist supporters of outgoing President Donald Trump who did not accept the election results gathered around the Capitol, from time to time shouting slogans such as "USA" or "stop the steal." At 1 p.m. local time, as the counting process of the joint session of the two houses of Congress began, Republican members of the Senate and House of Representatives challenged the results of Arizona's electoral votes. The counting process was then suspended and turned into a debate among members of the two houses.

An hour after that debate started, the congressional broadcast was abruptly terminated. The broadcast showed images of protesters breaking into the Capitol from outside the security perimeter. The building was then locked down and closed. Sirens blared outside my window as a string of police cars roared across the Potomac into Washington.

Fearing that the police closed the roads, I didn't take a taxi but got on my bike and rode across the river, heading to the Capitol. Once I arrived at the Lincoln Memorial on the other side of the river, I faced dozens of tour buses. One of the bus drivers told me the bus was there for the pro-Trump march.

"We're from Michigan,” the driver said, “and that one over there is from California."

Buses that brought Trump supporters to D.C. were parked all along the way to the Capitol. By the time I arrived, the rioters who had broken into Congress had begun to be removed by Capitol police, and many with Trump flags were leaving. Three Trump supporters from Missouri told me the Capitol was on lockdown, but the demonstration was not over. Because the buses waiting for them could park for only a limited time, they had to leave. Hearing that I was a resident, one of the middle-aged ladies laughed and said, “You have a crazy life living here!"

The further I rode, the harder it was to advance because the crowd was growing bigger and bigger. I got off the bike and walked to the Capitol. As I passed the Washington Monument, the main road was blocked by police cars. There was no roar of other vehicles, but the sound of sirens and helicopters grew louder and louder.

As I reached the Capitol lawn, I found it packed with people. From the base of the Capitol, I could see Trump supporters occupying the space from bottom to top with their red baseball caps and blue Trump flags.

Among the protesters on the lawn, there were many Mandarin-speaking Chinese. A few middle-aged Chinese women paired up and joined the crowd while an Asian boy silently held a huge Trump banner in the wind.

Hardly any of the protesters wore masks, though news reporters who were filming did so.

A big, tall guy emerged from the crowd with his face red and his hands covering his eyes. Was he hit by tear gas? As the giant walked away, I hurried to catch up with him.

"Yes," he said, pouring bottled water into his eyes.

"You broke into Congress?"

"Yes, I was in there,” the giant said. “But they sprayed me, and I couldn't take it anymore, so I came out. That's the second time I've been sprayed today."

Earlier, a barrier erected by congressional guards around the Capitol was toppled, and guards used tear gas to keep rioters from entering the building. But this did not stop some from breaching the Capitol.

Another protester who said he was forced out by tear gas was unable to open his eyes and was supported by a companion.

“We did break in, but they used pepper spray!” the companion explained. “I had to get him out, and I'll be back."

Walking to the small square in front of the Capitol, thousands of bare-faced protesters filled the terraces and stairs up and down the Capitol. Scaffolding on both sides of the Capitol, which used to be empty, was also filled with people. They sang the American national anthem and waved "Trump 2020" flags.

People within the crowd communicated by text. Every now and then, the crowd at the Capitol doors would suddenly erupt in cheers. A source downstairs explained to bystanders that this signaled another successful break-in. According to media reports from inside the building, hundreds of people broke into the Capitol that afternoon.

Sirens continued to wail as more police were sent into the Capitol. Many people shouted at the police, "You fascists!"

Another hour passed, and the crowd did not thin. People in the crowd began to report that someone had been shot inside the building. Another message said the National Guard was coming.

It was getting late, and I need to get home to catch up on my work. When I stepped out of the road closure zone, I called Uber twice, but no one answered. I then jumped on a D.C. shared bike in a hurry. By the time I crossed the Potomac and returned to the hillside in Arlington County, the sky turned dark blue. As I looked back across the river, the lights of the Capitol dome began to fade. It was still the same orange light, flickering in the same way. As night descended, the Trump supporters in front of the Capitol began to disperse.

At 8 p.m., members of Congress returned to the House chamber to continue the process of counting electoral votes, as decided by congressional leaders from both sides of the aisle. When Vice President Mike Pence announced "back to work," the chamber erupted in applause.

At 11 p.m. local time, the Washington police reported that the number of people who died in the Capitol break-in and related demonstrations rose from one to four. In addition to a female protester who was shot and pronounced dead shortly after breaking into the Capitol, one other woman and two men also died. Police did not specify whether the three other people also broke into the Capitol.

At about 1 a.m. Jan. 7, the Capitol police said all of the buildings on Capitol Hill were "out of danger," but police would continue to conduct security surveillance.

After the Capitol break-in, Washington and some surrounding areas imposed a curfew from 6 p.m. Jan. 6 to 6 a.m. Jan. 7. Subsequently, the Washington city government declared a state of public emergency to remain in effect for 15 days until the U.S. presidential inauguration Jan. 20. The installation of Joe Biden and Kamala Harris as president and vice president may also be carried out in a state of caution.

Du Zhihang is a Caixin Media’s U.S. correspondent based in Washington, D.C.