With Prices High, Pork Players Fatten Up Supply Before Holiday

By Huang Shulun and Timmy Shen 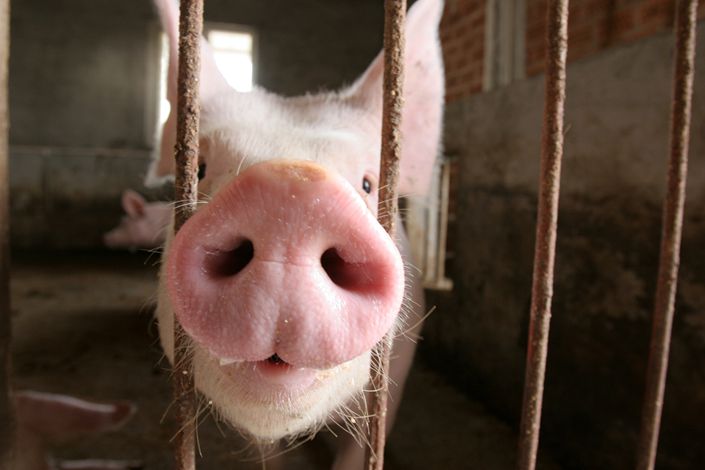 Chinese hog breeders have expanded their live hog supplies to boost sales ahead of the Lunar New Year holiday.

Major pork industry players are growing their supplies to meet increased demand ahead of the Lunar New Year next month, with prices remaining high due to the deadly African swine fever outbreak that killed millions of the nation’s hogs.

Shanghai-listed animal feed specialist Aonong Biological Technology Group Inc. Ltd., for example, reported a 11.6% month-on-month increase and nearly 400% year-on-year growth in hog sales in December, it said in a Wednesday statement to the bourse (link in Chinese). Sales more than doubled in 2020, the statement said.

Pork prices have been high for over two years on the lingering fallout of the African swine fever outbreak that began in August 2018, a situation compounded by market disruptions during the global Covid-19 pandemic. The highly-infectious disease killed millions of pigs and forced the slaughter of millions more as farmers and agricultural officials tried to control the spread.

The devastation has driven many smaller producers out of the sector, paving the way for major players to boost their positions with new investment as the industry starts to recover.

The industry is slowly rebounding as the virus recedes, but prices remain high. On Friday, the average price of lean pork was 36.78 yuan ($5.68) per kilogram, a significant rise from 12.02 yuan recorded two years ago, according to industry consultancy Soozhu.

Pork supplies are expected to grow by about 30% year-on-year for the period between December 2020 and around the Lunar New Year, which falls in early February, the Ministry of Agriculture and Rural Affairs predicted in November (link in Chinese).

Zhu Zengyong, a researcher at the Chinese Academy of Agricultural Sciences, said that pork prices are likely to remain high, but that higher slaughter rates will moderate any increase.

Farming firms are also expanding their pig herds. In November, the country’s sow stock grew 31.2% year-on-year, marking the sixth straight month of growth, while live hog stocks saw a fifth consecutive month of expansion, according to data (link in Chinese) from the agriculture ministry.

Snowfall in some regions, however, hindered the shipping of hogs and thus caused a reduction in supply, pushing up prices, the agriculture ministry said in a Jan. 5 statement (link in Chinese).

“2020 is the fastest year of growth for the company’s pig-raising related business,” an executive at Shenzhen-listed pig farmer New Hope Liuhe Co. Ltd. said on Dec. 27, adding that the company had achieved its annual pork production goal. In December, it sold nearly 1.7 million pigs, a 306% increase year-on-year, according to data (link in Chinese) it released Thursday.

New Hope told Caixin that it plans to expand pork production capacity to at least 25 million pigs for slaughter in 2021 and 40 million in 2022.

On Friday, China began trading its first live hog futures, which will serve as hedging tools for breeders recovering and expanding production after the African swine fever outbreak.