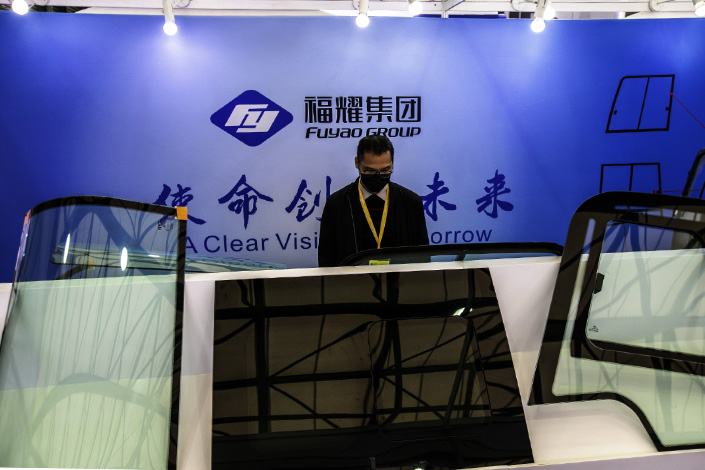 A man checks out a car windshield made by Fuyao at an exhibition in Shanghai on Nov. 25.

The move follows several tough years for the Fuzhou-based manufacturer, as successive annual declines in auto sales since 2018 have cut into its profits at home and the Sino-U.S. trade war has hurt the company’s profitability overseas.

The glassmaker, whose current customers include Ford, General Motors and Volkswagen, was the focus of controversy in 2019 when a U.S. plant it runs became the subject of “American Factory,” an Academy Award-winning documentary that highlighted the cultural struggles between a high-tech, anti-union management and its working-class employees.

To compensate, Fuyao Glass aims to enter a market where demand is red-hot, as the average price for 3.2 millimeter photovoltaic glass rose 48% year-on-year to 43 yuan ($6.64) per square meter recently, according to research firm PV InfoLink. A recent loosening of government control over capacity for such glass has sparked a new round of expansion.

Demand is being fueled by China’s ambitious moves into clean energy, especially solar, following the country’s pledge to become carbon neutral by 2060.

On Friday, Fuyao announced it plans to issue up to 101 million additional shares to provide financial support for the move, according to a filing with the Hong Kong Stock Exchange. The new issuance increases the company’s total H shares on the Hong Kong bourse by one-fifth.

Fuyao didn’t specify the amount of money it seeks to raise. The value of the offering is based on the company’s closing share price, which rose 4.21% on Friday to HK$45.8 ($5.90), representing HK$4 billion, according to a Caixin calculation.

But shortages are expected to persist in the near term, with a report by Sinolink Securities suggesting the government decision to relax control of new glass-making capacity will not tackle supply issues until 2022.

With more than 90% of its profit coming from glass products for vehicles in 2019, Fuyao relied on its domestic market for half its profits. Adding to its troubles, the Sino-U.S. trade war cost it an added $110 million of taxes in 2019 alone, dampening Fuyao’s profitability in its overseas markets.

As a result, Fuyao’s year-over year profit in 2019 plunged 30% to 2.9 billion yuan, and slumped a further 27% year-on-year in the first three quarters of 2020, according to Fuyao’s financial reports.