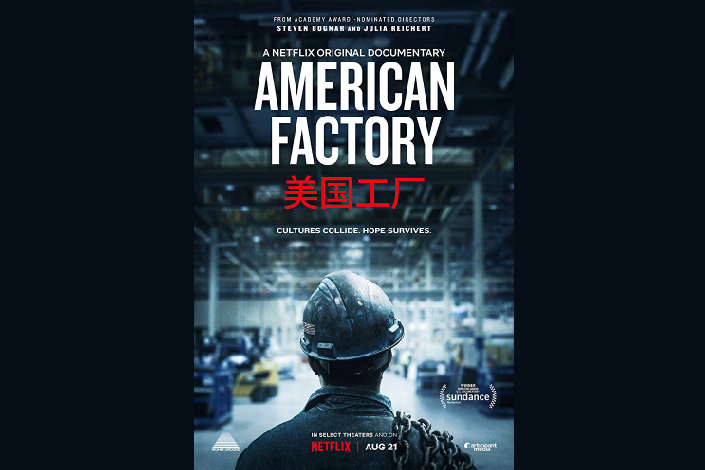 “American Factory,” a documentary focusing on a Chinese-owned factory in Dayton, Ohio, has not just sparked discussion in the United States. Despite not yet being available to a domestic Chinese audience, the Netflix film has still spurred reactions and chatter in China.

The documentary is the first from the production company founded by former U.S. President Barack Obama and former First Lady Michelle Obama. It explores cultural and management conflicts after the U.S. branch of Chinese automotive glass manufacturer Fuyao Glass Industry Group Co. Ltd. opened operations in an abandoned General Motors Co. (GM) plant. The GM factory had closed its doors in 2008, causing thousands of blue-collar workers in the area to lose their jobs.

In 2014, Fuyao invested $600 million in the Dayton factory and announced to great fanfare that it would provide 2,000 jobs. At the time, it was heralded as an inspiring moment of Chinese capital saving unemployed American workers in the “rust belt,” a symbolic event of further Sino-U.S. economic and trade interdependence.

While the fact that it was produced by the Obamas was certainly a marketing boon, the presidential couple was not actually that deeply involved in the creation of the film. Original producers and directors Steven Bognar and Julia Reichert began the film independently — they had documented the factory’s closing in 2009 in an Oscar-nominated short titled “The Last Truck: Closing of a GM Plant.”

The film has not been released in China and Netflix is not available to subscribers on the Chinese mainland. It has nonetheless received more than 18,000 ratings on Chinese film-scoring site Douban (though it is unclear how many of those users are based outside China), with an overall score of 8.5 out of 10. Many of the commenters on the site note the irony that the self-proclaimed “socialist” country is in ways more capitalistic than the U.S.

“This isn’t a ‘culture clash,’ it’s a clash between 18th-century capitalism and 21st-century capitalism,” one user wrote, making a reference the arguments of Tsinghua University professor Qin Hui, who is a strong critic of Thomas Piketty’s “Capital in the Twenty-First Century.” In his “Dilemmas of Twenty-First Century Globalization: Explanations and Solutions, With a Critique of Thomas Piketty’s Twenty-First Century Capitalism,” Qin argues that China was able to become the “world’s factory” because Western capital could take advantage of low-wage labor and the Chinese government’s commitment to development at any cost.

In a column about the documentary, Yang Shiyang, an editor at China Newsweek, wrote about the crux of the film — the battle between the labor union and the employer. “The angry labor union leaders said that 150 years ago, they said no to the method that has no respect for people. Therefore, what they fear is not a new change or style, but a retrogression to the old (ways of management),” he wrote. On the other hand, the “Chinese employers regard the old situations as a new life that will save American workers.”

“Yes, it’s amazing that (the Americans) have too many systems for labor rights protections, but how many of our protections systems should be perfected?” he goes on to write. “Are we suppressing our rage against 996 while cursing the people across the globe who are trying to prevent themselves from being overworked?” he asks, referring to the intense working culture that has provoked disputes over labor conditions in China’s tech world.

In an interview with Caixin in 2017, Fuyao chairman and founder Cao Dewang said that it was inevitable Chinese factories expanding abroad would face challenges. “We have to create the conditions for acclimatizing. You can only change yourself, not the environment,” he said.

Cao also explained that the average wage for American workers in American factories is about eight times that of Chinese workers and that the average age is between 50 and 60. However, the costs of electricity, natural gas, and corporate tax are lower than in China, along with the spared expense of shipping overseas. As he predicted, the plant in Ohio has turned a profit since 2018.

However, the dilemma reflected in “American Factory” still poses a challenge to U.S. President Donald Trump’s promise to bring manufacturing jobs back to America. After all, not all foreign investors have the incentive of improving their country’s image in the eyes of Americans, as Cao hoped to do with the plant in Dayton.