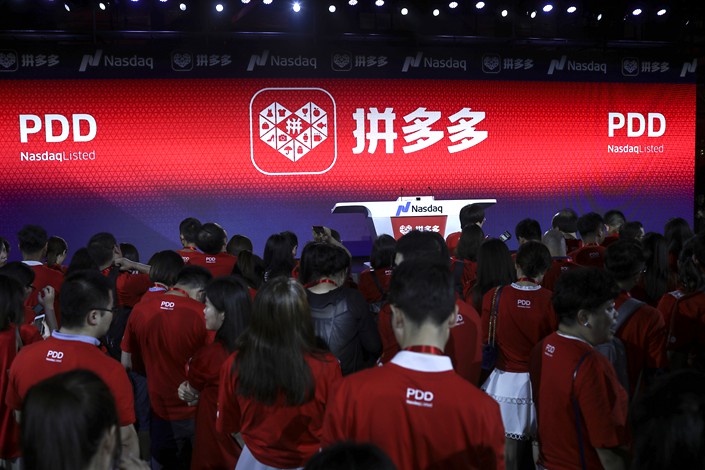 A former Pinduoduo worker surnamed Wang posted a video Sunday claiming that the company fired him within half an hour of his posting of a photo of a colleague being taken away by ambulance.

Discount e-commerce specialist Pinduoduo Inc. has landed at the center of a fresh controversy for the second time in just days, after an employee linked his recent firing to a photo he posted online alluding to a corporate culture of long work hours.

The spate of negative news has taken some of the shine off one of China’s biggest e-commerce up-and-comers, wiping 8% off its stock over the past week, including a nearly 5% fall in the latest trading session. Much of the news revolves around a “996” culture that is common at many Chinese high-tech firms, whereby employees are often pressured to work from 9 a.m. to 9 p.m., six days each week.

Some believe that culture may have contributed to two recent deaths, including one by a male employee who jumped from his family’s 27th floor apartment in the Central China city of Changsha over the weekend. That case came less than two weeks after another 22-year-old employee collapsed and died shortly after getting off work in the early hours of Dec. 29.

The latest controversy centered on an employee recently fired after posting a photo alluding to the perils of “996” culture.

The brouhaha began when the worker, surnamed Wang, anonymously posted a photo on Jan. 7 on the networking site Maimai, showing a colleague being taken away by ambulance that morning from the Pinduoduo office where he worked. Accompanying the photo he included the words, “The second Pinduoduo warrior to fall.”

The post quickly went viral, prompting a Pinduoduo platform manager to respond by explaining a male employee was taken away from the office after complaining of stomach pain. It said that worker was later diagnosed with intestinal cramps.

Wang was fired the day after making the post, and uploaded a 15-minute video with his version of events on Jan. 10.

In the video, he said the day after posting the photo he was called into a meeting with his supervisor and a human resources staffer who said his posting was aimed at deliberately defaming the company. They encouraged him to voluntarily resign, but Wang said he refused. That prompted the company to fire him, confiscate his work badge and escort him off the premises within 20 minutes.

In the video, Wang accused the company of a number of excessive practices, led by its request that all employees work 300 hours each month, including weekends and holidays. He also criticized the company for providing spoiled food to workers, and for inadequate restrooms, among other things.

Pinduoduo’s human resources department responded to the video a day later, saying the employee was fired for anonymously expressing extreme views on social media. It said it had discovered his past anonymous posts saying things like he wished certain people would die, and that he wanted to scatter their ashes. The company said such posts violated its policies, and were behind its decision to fire him.

The company said the employee admitted to making the posts when confronted by human resources, though it didn’t explain how it was able to identify the person. Wang declined to comment on Pinduoduo’s explanation when contacted by Caixin, saying his case was in the middle of being arbitrated.