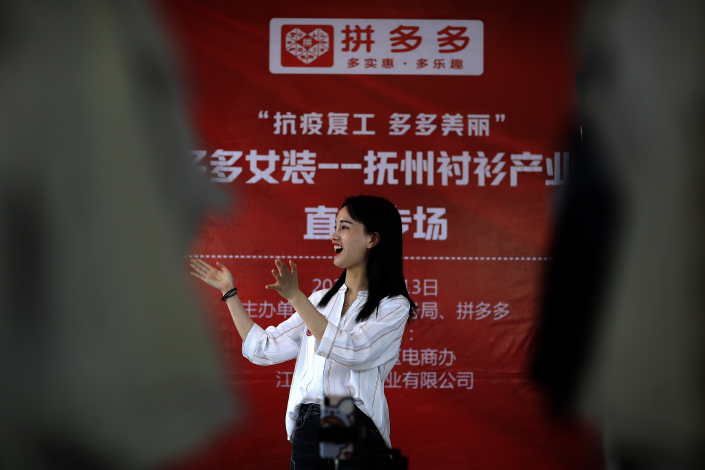 A host introduces products that will be sold on e-commerce platform Pinduoduo during a livestreaming event on April 13 in Fuzhou, East China's Jiangxi province.

A worker at e-commerce giant Pinduoduo Inc. committed suicide over the weekend, the second death in less than two weeks, shining a spotlight on the long hours often forced upon employees in China’s highly competitive private high-tech sector.

The worker, surnamed Tan, jumped to his death from a building around 12:30 p.m. Saturday in the city of Changsha in Central China’s Hunan province, the company confirmed later the same day. According to his father and subsequent follow-up with Pinduoduo, Tan had flown back to Changsha the previous day before leaping from the 27th floor of his family’s home. A doctor later confirmed the case was a suicide.

Pinduoduo’s internal records showed that Tan had requested time off on Friday morning, though no reason was specified. The company confirmed that Tan had only joined the company in July, and was a single male who worked as a technician in one of its Shanghai offices.

The case thrust Pinduoduo into an uncomfortable spotlight once again, less than two weeks after similar scrutiny followed the death of a woman who worked for the company. That case unleashed a storm on Chinese social media over an often unspoken “996” work culture that demands employees stay on the job from 9 a.m. to 9 p.m. each day six days a week, with only Sundays off. The culture is especially prevalent in China’s private sector, particularly among internet and other technology companies.

A representative from the Shanghai labor bureau confirmed to Caixin that it had already launched a review of Pinduoduo’s labor practices after the earlier death. In that case, a 22-year-old collapsed in the street and died later after getting off work in the early hours of Dec. 29. She had been employed by Pinduoduo’s grocery unit in Western China’s Xinjiang Uygur autonomous region, and had joined the company in July 2019.

Before her death, the woman had complained about her job on social media, saying: “The capitalist revolution has truly gobbled up the ordinary people.”

Her death caused the issue to trend widely on Chinese social media, and the debate gained even more attention after the founder of a popular restaurant chain made controversial comments on the topic. In that instance, Jia Guolong, CEO of a popular Northwestern Chinese cuisine restaurant chain, suggested an even more oppressive work schedule when asked to comment on the Pinduoduo case. He proposed a “715” schedule, whereby people should work for 15 hours a day, seven days a week.

Chinese labor law stipulates that regular working hours should not exceed eight hours a day and an average week at work should not exceed 44 hours, though many private-sector employers often ignore such conditions. After being subjected to angry backlash, Jia later responded that the “715” system was not compulsory for staff but should be seen as a “description of voluntary work.” The CEO added that he would never do anything that broke the law.

Following the uproar over the first death, the state-run Xinhua News Agency commented that allowing workers to put in such oppressive hours was harmful to their health and illegal, and wasn’t part of the traditional “spirit of struggle.” It called for moderation, and said companies should protect their workers’ rights in helping them pursue their dreams.

Before the latest debate, the “996” culture was thrust into the spotlight back in April 2019 when two of China’s biggest e-commerce titans voiced their support for such hours. The discussion began after Alibaba Group Holding Ltd. founder Jack Ma said that while no firm should force employees to adopt 996, young people should understand happiness comes from hard work. Richard Liu, founder of rival e-commerce giant JD.com Inc., said that people who “laze away” their days were not suitable to be his brothers in arms.

Before that, Taiwan’s Foxconn, known as one Apple Inc.’s key manufacturing partners, became embroiled in a similar heated debate after a series of suicides about a decade ago at one of its mega production bases in South China. At that time, the cases cast a spotlight not only on long work hours for many Foxconn employees, but also on the isolation they felt after traveling far from their homes to work and being forced to spend most of their time in the company’s massive manufacturing compound.

This story has been corrected to reflect that the cause of death in the first case wasn’t specified.