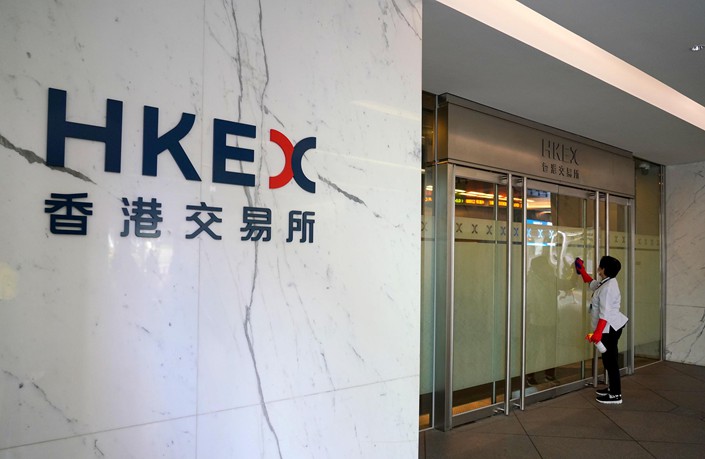 The TraHK will continue to hold its existing stakes in the sanctioned securities, which remain part of the Hang Seng Index.

The manager of the largest exchange-traded fund (ETF) in Hong Kong has said it will not invest any more of the ETF’s money in companies that the U.S. has blacklisted for their alleged ties to the Chinese military.

The plight faced by Hong Kong’s most actively traded ETF — and its HK$103 billion ($13.3 billion) in assets under management — has become the latest example of how the Asian financial hub has found itself caught between Beijing and Washington as tensions mount between the world’s two largest economies.

U.S. investment company State Street Global Advisors Asia Ltd., which runs the Tracker Fund of Hong Kong (TraHK), said Monday that the ETF was “no longer appropriate” for American investors due to the U.S. executive order barring them from trading the securities of certain Chinese firms.

The ETF tracks Hong Kong’s benchmark Hang Seng Index, which includes now U.S.-banned telecom giants China Mobile Ltd. and China Unicom (Hong Kong) Ltd., and CNOOC Ltd., the listed arm of one of China’s state-owned oil giants. The fund will refrain from new investment in the three companies, which together account for 3.79% of the Hang Seng Index’s total weight.

The change will not be without consequences. State Street said it expects the change to result in “greater tracking error” for the ETF, meaning a wider gap between the returns of the ETF and index itself.

The TraHK will continue to hold its existing stakes in the sanctioned securities, which remain part of the Hang Seng Index. However, this could change “depending on future developments,” a State Street spokesperson told Caixin.

While the Hong Kong index provider has yet to remove sanctioned Chinese companies from its benchmarks, global index complier MSCI Inc. deleted stocks of China Mobile and two other Chinese telecom companies from its global benchmark indexes on Friday, triggering a rush to sell that drove China Mobile’s share price to a 14-year low.

In addition to moves imposed on the TraHK, State Street said it had also divested, or was seeking to divest, from holdings in sanctioned securities in any investments it manages as of Friday, in compliance with the ban.

Other U.S. institutions have made similar decisions, including Franklin Templeton Investments and BlackRock Inc., one of the world’s largest asset managers.

In addition to turmoil in the fund market, Goldman Sachs Group Inc., Morgan Stanley and JPMorgan Chase & Co. have decided to delist 500 structured products in Hong Kong, including warrants and callable bull/bear contracts on the Hang Seng Index, the Hang Seng China Enterprises Index and China Mobile, according to filings to Hong Kong Exchanges and Clearing Ltd.

The bourse responded on Sunday that the removal will have no material adverse impact on Hong Kong’s structured products market, which is the largest in the world with more than 12,000 listed products. It’s working closely with relevant issuers to ensure orderly delisting, it added.