By He Shujing and Flynn Murphy 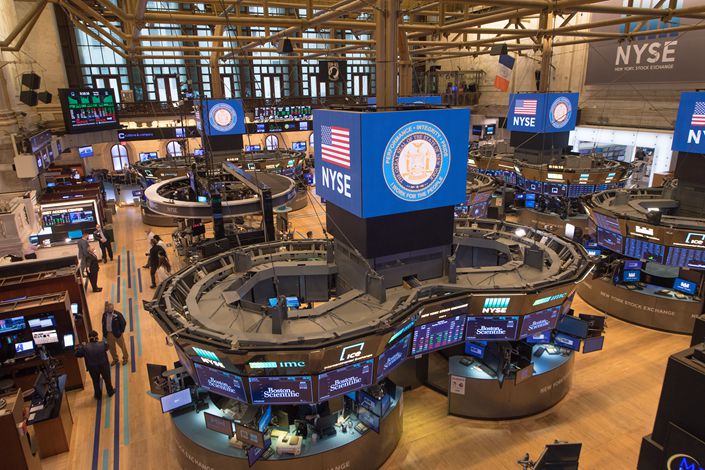 The New York Stock Exchange announced on Dec. 31 that it would begin to delist the three major Chinese telecom firms, in line with an executive order from the outgoing U.S. president.

Shares of China’s three largest telecom firms slid in Hong Kong on their first morning of trade after revelations last week of a U.S. government effort to delist them in New York, but had mostly recovered by market close.

With just days until they are forced to pack up and leave the New York Stock Exchange (NYSE), the firms have broken their silence, saying they only trade small amounts of shares in the U.S., and that shareholders will be able to exchange them for Hong Kong stock.

China Mobile Ltd., the largest of the trio, said it regrets the decision and actions of the U.S. bourse, and that it had always followed relevant laws and regulations.

The relatively measured comments followed condemnation from China’s Ministry of Commerce, which alleged the U.S. leadership was using the pretext of national security to target Chinese firms on Saturday, and a defense of the companies’ fundamentals on Sunday by stock watchdog the China Securities and Regulatory Commission (CSRC).

The U.S. government push to boot China’s three main carriers from Wall Street, which was made public Friday, has been seen as largely symbolic — it should have little material impact on the companies — but could augur a broader decoupling of communications between the two superpowers.

Behind the delisting push is an executive order signed by President Donald Trump on Nov. 12 prohibiting Americans from trading the stocks of 31 firms defined as “Communist Chinese military companies” by the Pentagon.

The three major telecom firms were among the initial tranche blacklisted in the order, which is scheduled to take effect on Jan. 11. The NYSE said the firms would be delisted by 4 a.m. that day.

According to announcements from the companies — China Mobile, China Telecom Corp. Ltd., and China Unicom (Hong Kong) Ltd. — were trading 2.2%, 1% and 0.57% of their total respective share capital as American depositary receipts (ADRs) on Dec. 31. Excluding stock held by controlling shareholders, the common stock represented by ADRs represented 8%, 5% and 3.32% of the firms’ equity.

ADRs are a common financing channel for Chinese firms in the U.S. that let local investors purchase overseas stocks not listed in the country. All three companies have offered ADRs since listing in Hong Kong around the turn of the century.

The firms said they had received no written notice of the delisting plan from the NYSE. The markets shrugged off the news, with shares of China Mobile down from HK$44.2 to a low of HK$42.2 in morning trading, but recovering to HK$43.85 after an afternoon rally for a daily loss of 0.79%. China Telecom was down 2.79% in Hong Kong at close of trade Monday, while China Unicom overshot its morning losses to gain 0.45% on Monday.

The firms all said investors who hold ADRs will be able to return them to their trading agent, BNY Mellon, in exchange for Hong Kong stock, with each ADR in China Mobile, China Unicom and China Telecom corresponding to 5, 10 and 100 H shares, respectively.

On Dec. 31 local time, the NYSE announced that in line with an executive order from the outgoing president, it would begin to delist the three major Chinese telecom firms.

The CSRC response came four days later on the evening of Jan. 3, Beijing time, saying the executive order was “based on political purposes” and “entirely ignored the actual situations of relevant companies and the legitimate rights of the global investors, and severely damaged market rule and order.”

The regulator also pointed to what it said was their huge customer bases, sound fundamentals and significant role in the global telecommunications sector.

“We firmly support the three companies to safeguard their legitimate rights according to law, and believe they are able to properly handle any negative impact caused by the executive order and potential delisting,” it said.

It also hit out at what it called “arbitrary, reckless and unpredictable” U.S. rules and institutions, and called for their American counterparts to “show respect for the market and reverence for the rule of law.”

The Ministry of Commerce (MOFCOM) hinted it may retaliate in comments circulated through the official state news agency Xinhua on Saturday, in which a MOFCOM spokesperson criticized the U.S. for “abusing national security and using state power to suppress Chinese enterprises.” The spokesperson said China would take “necessary countermeasures to resolutely safeguard the legitimate rights and interests of Chinese enterprises,” without specifying any actions.

With weeks left before Trump leaves office, questions are swirling about whether other attacks on Chinese firms will crystallize — and indeed whether a change of leadership will actually bring a change in policy.

Closely watched is a Dec. 10 statement by the Federal Communications Commission (FCC) saying it was reviewing whether to terminate China Telecom’s license to provide domestic and transnational telecom services in the U.S.

The FCC said the review was intended to protect the country’s telecommunications infrastructure from potential security threats.

It’s another move that would have more symbolic than material impact on the companies, at least according to earlier comments by executives of all three firms which have played down the scale and significance of their U.S. operations. China Unicom’s U.S. revenue was about 0.2% of the company’s total in 2019, according to Chairman Wang Xiaoqu in August. Meanwhile the U.S. revenue of China Mobile accounted for an even slimmer 0.05% of the firm’s 2019 takings, according to comments made by Chairman Yang Jie the same month.

Both moves are part of the Trump administration’s broader “Clean Network” campaign, which was expanded in August to include telecommunications operators, submarine cables and cloud services, and frames even the presence of Chinese operators connected to the U.S. telecommunications network as a security threat.